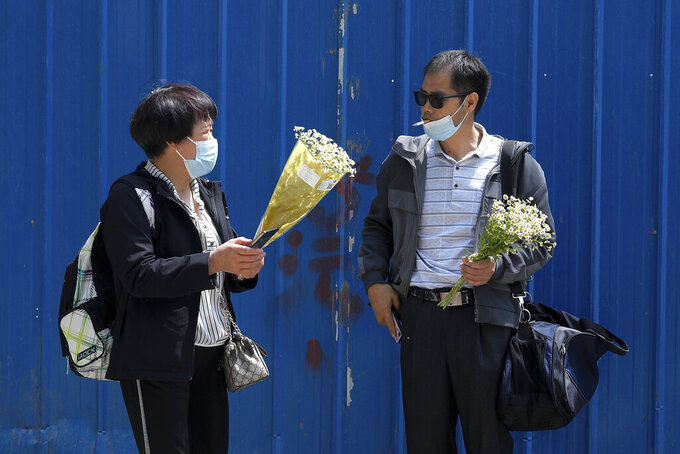 Wei Xiuwen, mother of Chen Mei, chats with Cai Jianli, father of Cai Wei outside a courthouse after attending their children's court cases in Beijing, Tuesday, May 11, 2021. Two amateur computer coders taken by police from their Beijing homes last year were standing trial Tuesday in a case that illustrates the Chinese government's growing online censorship and heightened sensitivity to any deviation from the official narrative on its COVID-19 response. (AP Photo/Andy Wong)

Chen Mei, 28, and Cai Wei, 27, created an online archive that stored articles that had been censored from the Chinese internet, and an accompanying forum that allowed people to discuss them anonymously.

In court, prosecutors zeroed in on 2049bbs, the forum accompanying the archive. They said Cai was responsible for building a website that had insulted the government, and Chen had paid for it, Chen’s mother, Wei Xiuwen, told reporters outside the court.

Family and friends believe what got them in trouble was archiving articles showing an alternative to China’s official narrative about its coronavirus response just as the country started facing questions over its handling of the initial outbreak.

The case was tried at Wenyuhe People’s Court in the northeastern outskirts of Beijing. The court said sentencing would come at a later date.

The charge “stirring up trouble and picking quarrels" is a catch-all charge often used for politically sensitive cases.

Chen’s mother, who traveled from northwestern Shaanxi province to attend the hearing, said her son wore a full-body medical protective suit and had his hands cuffed and feet shackled. She could tell which one was her son, as he is shorter than Cai, but was unable to make eye contact. The only time her son spoke was to plead guilty, she said.

The two men have been held for more than a year since authorities detained them without warning in April 2020, along with Cai's girlfriend Tang Hongbo. Family and friends only knew something was wrong when they realized they hadn't had any contact with any of them three in days. Tang was later released after it became clear she did not know about the others' work online.

Their parents had not seen them for more than a year, as both lived in Beijing for work. Throughout the process, the families pressed for the two to have access to their own lawyers, but the court appointed lawyers for them instead.

“If I can shoulder the consequences for him, I would,” said Cai's father, Cai Jianli, from Guangdong province in southern China.

The parents were not able to speak with their children. Cai Jianli said the court-appointed lawyers told them to keep quiet in court.

Cai and Chen created the archive in 2018, keeping hundreds of censored articles. The forum saw discussions on sensitive issues that could not be freely discussed on the Chinese internet including the anti-government protests in Hong Kong and complaints about the ruling Communist Party. Forum users also discussed the pandemic after cases were first detected in Wuhan in late 2019.

Terminus2049, the archive itself, primarily housed articles that had been deleted from Wechat and Weibo, popular social media platforms that are subject to regular algorithmic and human censorship. While similar databases existed, most were blocked in China. Terminus2049 was available on Github, a code sharing platform that is not blocked.

The forum and archive never had major reach, but the case has attracted the attention of a few.

One supporter waited outside the court Tuesday to give two bouquets of chamomile flowers to the parents. The 25-year old, who declined to be named out of fear of repercussions, said she thought the two men had done a service for society during the pandemic by showing there was more than one official story.