At 38, Alves helps Brazil to soccer gold by beating Spain 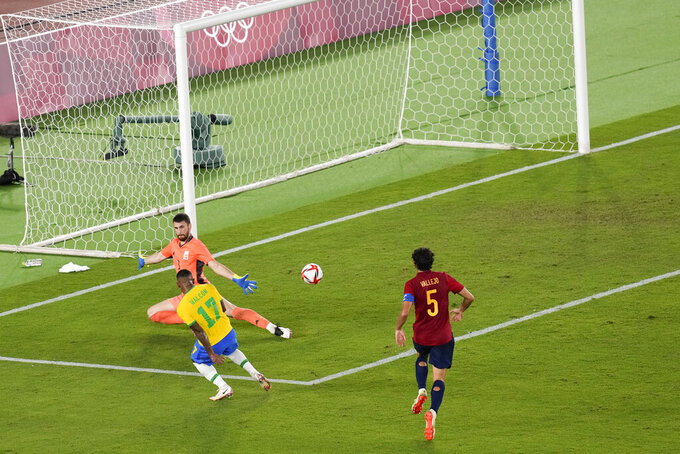 Draped in the Brazilian flag, the captain cherished the 43rd winners' medal of a career that shows no sign of winding down.

All that's missing from the set of major honors after this 2-1 victory over Spain — secured in extra time by Malcolm — is World Cup glory.

Don't write off the game's most decorated player trying to make it to Qatar next year. He's keen.

“I’m a dreamer, a small dreamer, and more than a dreamer, somebody who executes their dreams,” Alves said. “The most important thing is to fight, and that’s what I know what to do. I have the drive of a 23-year-old. I still want to do big things in football."

The right back was determined to come to the Tokyo Games after not being part of the 2016 Olympic gold on home soil in Rio de Janeiro.

“I fought to be in three Olympic Games,” he said. “I am grateful to all the people who worked with me, that believed in me, and I want them to know that all the hard work has paid off.”

“This is a dream coming true, to be on the top of the Olympic podium,” he said. “No matter how much history you have, how much experience you have. I came here for the first time and to come back with the biggest prize ... I am lost for words.”

It was Alves who set up the opener, keeping alive Claudinho’s cross and hooking the ball back into the area for Matheus Cunha to strike into first-half stoppage time.

“My captain Dani, he’s unbelievable, he helps everyone," Cunha said. “I think this feeling, he comes to the group and the feeling goes up."

He was one of only three permitted overage players in a youthful squad that idolized him growing up as he collected trophies at Juventus, Barcelona and Paris Saint-Germain.

“You know the difference in age is a little bit (big)," the 22-year-old Cunha said. "I’m like a little boy when I saw Barcelona, the Brazil national team, and now we were together, we take one gold medal for Brazil.”

They had to work for it against a Spain side featuring six players coming straight from the run to the European Championship.

Spain tied it in the 61st minute when Mikel Oyarzabal volleyed in from Carlos Soler's cross. Spain hit the crossbar twice late in regulation time — from Oscar Gil and Bryan Gil.

The inability to find the target meant Spain ended up with silver — and no repeat of the 1992 Barcelona Games gold — after Malcom's winner in the 108th minute.

The forward, who came off the bench for extra time, held off Jesus Vallejo before racing forward and seeing his shot from a tight angle deflect off goalkeeper Unai Simon’s left boot and fly into the net.

The goal secured another title for Brazil in Yokohama, 19 years after winning the World Cup. Unlike in 2002, because of the pandemic there were no fans allowed in the stadium 45 minutes from Tokyo. That was a tournament too early for Alves, who was only just starting his career.

Now playing back home for São Paulo, the two-time Copa America winner wasn't part of the Brazil squad that lost the final to Argentina four weeks ago.

Neymar, whose penalty clinched the 2016 Olympic title, couldn't get an exemption from Paris Saint-Germain to do double-duty this summer. Richarlison managed to from Everton and scored a tournament-leading five goals in Japan.

“See this, Neymar? I didn’t feel the pressure, I took the No. 10 shirt and was the top goal-scorer of the tournament," he said. "Now you will have to listen!”

Even FIFA, on its Twitter feed, called Richarlison’s workload “insane” — highlighting his 20 games in under three months in four competitions on three continents, covering the end of the Premier League season with Everton and World Cup qualifying with Brazil before the Copa America.

“All the sacrifice at the club, in the trainings, every (painkilling) injection I took to be able to play was worth it," Richarlison said. “I am going to make a tattoo to celebrate this achievement."