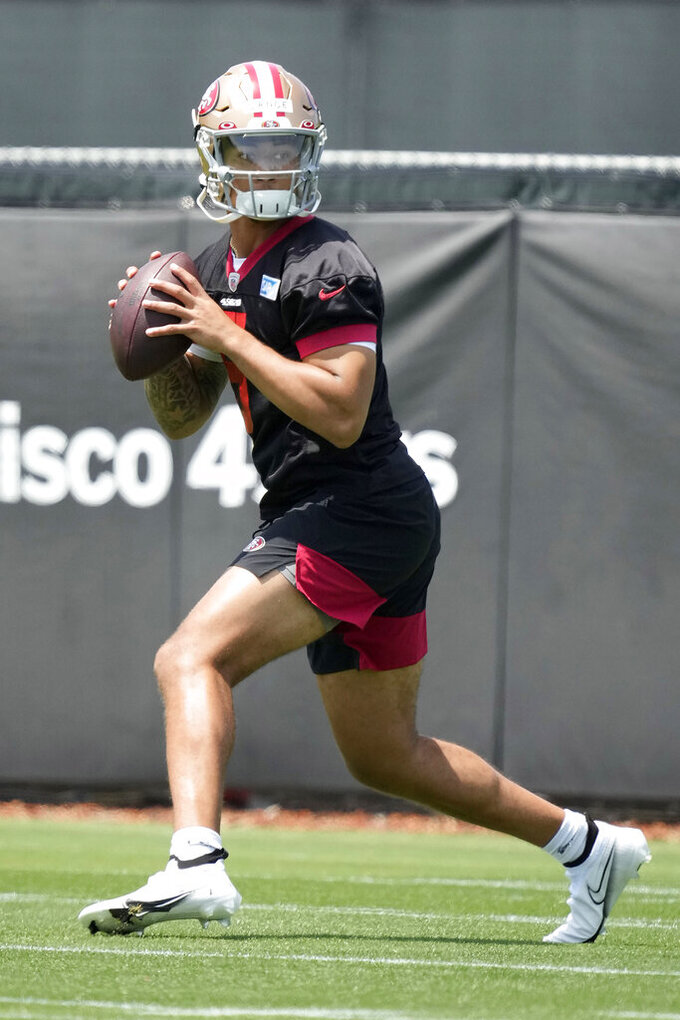 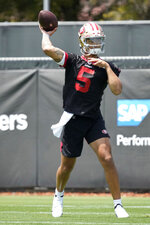 SANTA CLARA, Calif. (AP) — The pomp of draft weekend when he was picked third by San Francisco and got to put on his 49ers jersey for the first time is firmly in Trey Lance's past.

Now it's all about learning a new offense and making the transition to the NFL after playing only one game last season and making only 17 career starts at FCS-level North Dakota State.

“I think I’ve kind of gotten past the point where it’s surreal,” Lance said about putting on his jersey for the first practice at rookie minicamp Friday. "It’s work now. It was probably cooler the day after the draft and draft day and everything like that. Right now it’s my job, so I’m excited to get to work.”

The steps this weekend during the three-day rookie minicamp are only the most basic ones as the Niners had only 23 players on hand, including eight rookie draft picks, several undrafted free agents, five players on tryouts and a handful of returning players.

Lance looked comfortable running drills and 7-on-7 sessions, completing 20 of 24 passes in those drills with most being of the shorter variety. His best pass was a completion in traffic over the middle to tryout receiver Marqise Lee, who has played 59 career games in the NFL.

Lance also was intercepted once by fifth-round pick Deommodore Lenoir.

“I’ve been waiting to learn a new playbook for the last seven, eight months,” Lance said. “So it was a ton of fun to finally be able to get into it.”

Lance played only one game last season because North Dakota State's season was moved to the spring due to the coronavirus pandemic.

But he showed a strong arm and great mobility in 2019 to make him a top prospect and the Niners grabbed him at No. 3 in the draft after trading two future first-round picks to move up from No. 12.

Lance's production in 2019 was off the charts as he threw for 2,786 yards, 28 TDs and no interceptions and ran for 1,159 yards. Lance threw his only collegiate interception last fall against Central Arkansas in a game North Dakota State played in part to give him more exposure to NFL teams.

Lance comes in as the backup behind Jimmy Garoppolo, who already has reached out to welcome him to the Bay Area as a fellow former winner of the Walter Payton Award, which is given to the best FCS player each year.

But the Niners believe he can be the franchise quarterback down the road and that the experience he got running a pro-style offense in college will help that transition.

“I’ve got a lot to learn for sure,” Lance said. “But I also have great people around me, great coaches and obviously great guys in the quarterback room. So just looking forward to learning from them as much as I possibly can. I’m very thankful for the people at North Dakota State and my coaching staff and the offense that we ran because I think it did help me.”

Nothing he did in college prepared him for one aspect of life in the Bay Area. Coach Kyle Shanahan prepared him during the draft weekend for the sticker shock that will come when he starts looking for a place to live.

Lance should be able to afford it once he signs his contract, which will be worth $34.1 million over four years with a $22.1 million signing bonus.

“I definitely appreciated the warning,” Lance said. “I knew it would be kind of crazy, but it definitely helped giving me a little bit of a heads up. Super excited to get more familiar with the area.”