6 years later, Alabama and Ohio State go at it again 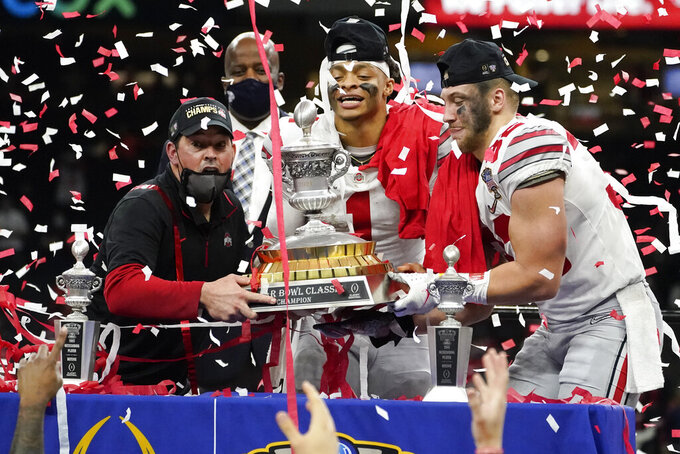 ARLINGTON, Texas (AP) — When Ohio State upset Alabama in the semifinals of the first College Football Playoff on the way to the Buckeyes' last national title, it seemed like the start of budding postseason rivalry between the two traditional powers.

Instead, Clemson became the Crimson Tide's nemesis and the biggest challenger to Nick Saban's Alabama dynasty over the next five years.

After the SEC champion Crimson Tide rolled past Notre Dame 31-14 in a Rose Bowl played deep in the heart of Texas, the No. 3 Buckeyes of the Big Ten beat Clemson 49-28 in the other CFP semifinal at the Sugar Bowl on Friday night behind Justin Fields' six touchdown passes.

How Fields is feeling will be the main story line heading into the title game. He took a hard short to the side in the second quarter against Clemson, but managed to play through the pain.

“He couldn’t do everything, but what a gutsy performance, what a tough and special young man Justin Fields is,” said Ohio State coach Ryan Day, in his second season after taking over from Urban Meyer.

Clemson was trying, like Alabama, to get to the title game for the fifth time in the seven seasons of the four-team playoff. It would have been the fourth Tigers-Tide game for the CFP championship.

Instead it's a matchup of storied programs playing Jan. 11 in suburban Miami to determine the champion of this most unusual season played in the shadow of a pandemic.

Alabama was the top seed in the first four-team playoff after the 2014 season, but Ohio State beat the Tide 42-35 in the semifinal Sugar Bowl behind Meyer, Ezekiel Elliott and Cardale Jones.

Those Buckeyes faced doubters of their playoff worthiness like these. In 2014, Ohio State had to come back from an early season loss to Virginia Tech to slip into the final playoff spot on the last weekend of the regular season.

After beating Alabama, the Buckeyes went on to win the national title 42-20 over Oregon that year, but they had lost twice to Clemson in the semifinals since.

Alabama has played 12 games, getting through a conference-only regular season before holding off Florida 52-46 in the SEC championship game and then winning the relocated Rose Bowl. That semifinal was moved from Pasadena because of COVID-19 restrictions that would have kept family — or any fans — from attending the game.

That Ohio State even got to play at all was surprising after the Big Ten canceled its fall season in August only to reverse course in September,

"With everything this team has been through this last 10 months or so, I’m just so happy for this group of guys,” Ohio State linebacker Tuf Borland said.

“Smitty has done as much for our team as any player could do for any team,” said Saban, who will be looking for his sixth national championship with Alabama and seventh overall.

The Heisman votes had already been cast before the semifinal. Alabama running back Najee Harris finished fifth in the voting and the order of the final four with Clemson's Trevor Lawrence and Florida's Kyle Trask will be revealed Tuesday night.

Playing only six game kept Fields out of the Heisman conversation. Especially after a poor performance in the Big Ten title game against Northwestern.

Fields looked like one of the best players in the country in the Sugar Bowl as the Buckeyes avenged last season’s painful CFP loss to Lawrence and Clemson.

“In life, you don’t typically get an opportunity to get a second chance," Day said. ”But you can’t miss the second time. So I don’t know what we’re more excited about, the fact that we have a chance to play for a national championship or the fact that we avenged that loss."