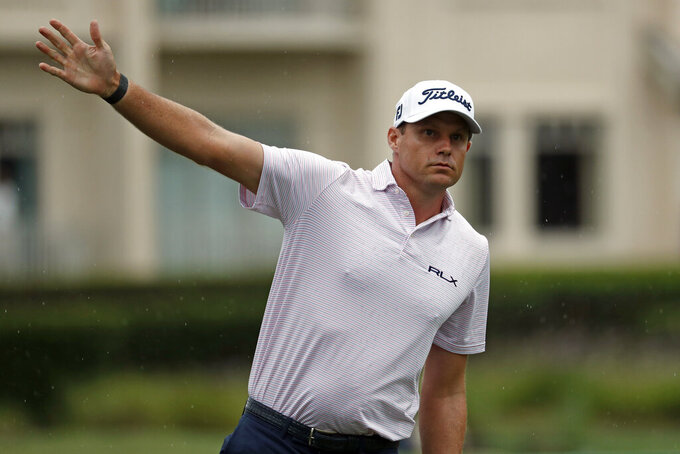 In this photo taken Thursday, June 18, 2020 Nick Watney signals after a tee shot during the first round of the RBC Heritage Golf tournament at Harbour Town Golf Links in Hilton Head, S.C. Watney has tested positive for coronavirus and did not play in Friday's round. (AP Photo/Gerry Broome)

This idyllic island is a summer destination, even during the COVID-19 pandemic.

“It’s a 30-minute wait, and once you get in there, there’s no social distancing, packed tables right next to each other, kids running around,” Ortiz said Saturday at the RBC Heritage. “We were impressed how nobody was wearing a mask. We talked about it on Tuesday when we saw it. We were like, ‘Oh, somebody’s going to get corona here.’ It’s crazy how busy it is in here inside the island.”

The tour put in motion part of its plan to handle such a result, starting with 11 additional tests for anyone who might have come in close contact with Watney. The initial tests all came back negative — including Tony Navarro, his caddie, and Vaughn Taylor, who played with Watney on Thursday.

Results from a second test were expected late Saturday or Sunday.

Golf made it through 11 days of its return before getting a positive test. The question now becomes who’s next, or how many more, before the show can’t go on.

Rory McIlroy, who chatted with Watney on the putting green shortly before the test result was returned, says sheer numbers made it virtually impossible to think no one in golf would test positive. He was not part of the contact tracing because “we kept our distance” on the putting green.

“We’re still in the middle of a pandemic,” McIlroy said. “I think we’ve done really well to start golf again and get back up and play golf tournaments. I don’t think anyone was blind to the fact that someone could catch the virus, and it’s a shame Nick did. But as I said, it’s one case. And as long as it’s contained to that and we move forward, we can keep playing.”

More stories emerged of a South Carolina resort that was busy as ever, even though fans aren't allowed on the golf course.

The tournament is typically played in April, the week after the Masters, when school is still in session. With the pandemic shutting down golf for three months, the RBC Heritage originally was canceled, and then moved to June after the Canadian Open was canceled and the U.S. Open was moved to September.

“Even if you wanted to go somewhere, there’s no place to go,” Joel Dahmen said. “We tried to rent bikes this week, and they’re sold out.”

Watney missed the cut last week at Colonial in Fort Worth, Texas, and drove home to Austin before flying to South Carolina with Sergio Garcia, who also lives in Austin.

He tested negative when they arrived, and according to McIlroy and Garcia, what led Watney to report symptoms was data on his Whoop strap that measures such metrics as heart rate, sleep and recovery.

“So it was his Whoop that told him his respiratory rate went up, and that’s why he thought, ‘Maybe I could have it,’” McIlroy said.

Garcia also was tested again Friday and said he was nervous waiting four-plus hours for the result. He said Watney apologized to him “probably 25 times” and that in his text exchanges, Watney said he is feeling fine.

Watney must self-isolate for at least 10 days. It ends provided he has no subsequent symptoms or has two negative test results at least 24 hours apart.

Under the tour’s 37-page “Return to Golf” protocols, players have a designated hotel that is not mandatory. They are urged not to eat out at restaurants, also a recommendation for caddies and the essential personnel who must be tested when they arrive at every tournament.

It’s up to them what they do after hours.

Justin Thomas is staying in a villa with Jordan Spieth and Rickie Fowler, and they brought a chef. Thomas was among those who noted how busy it was on the island.

“No offense to Hilton Head, but they’re seeming to not take it very seriously,” Thomas said. “It’s an absolute zoo around here. There’s people everywhere. The beaches are absolutely packed. Every restaurant, from what I’ve seen when I’ve been driving by, is absolutely crowded.”

Navarro said in a text he tested negative. He is self-isolating in Hilton Head, able to go to the store provided he wears a mask. He said he was staying to help Watney with anything he needs, and then planned to drive him home to Texas.

The tour administered 954 tests over the opening two weeks of its return — 487 at Colonial last week in Fort Worth, Texas, 98 for those who took the charter flight to South Carolina and 369 at Hilton Head. All were negative until Watney’s positive test on Friday.

Did that allow for a false sense of confidence?

Taylor’s test Friday also came back negative, and he spent he spent the evening watching television reports about the various sports coping with positive tests, whether it was Clemson’s football team or Major League Baseball training sites.

“It’s eye-opening to see how much the virus is out there and how careful we have to be,” Taylor said. “I felt like coming in the last week everyone was super careful, and then we got here, and the vibe on the island is a little more relaxed. I feel like we might have gotten a little more relaxed, too. Everyone has kind of ratcheted it up a little bit. Not hanging out with too many people, hanging with too many guys, stay out of restaurants and bars and those things.

“I think if we do that, we should be safe,” he said. “We’ve all got to keep that in the back of our mind and just be smart.”

The PGA Tour heads to Cromwell, Connecticut, next week, followed by Detroit and then back-to-back tournaments in Ohio.

“We’ve got to see what happens,” Koepka said. “It’s unfortunate Nick got it, but at the same time, hopefully, it stays with just him and doesn’t spread. Because I think we’ll have a big issue on our hands if it keeps going as the weeks continue.”