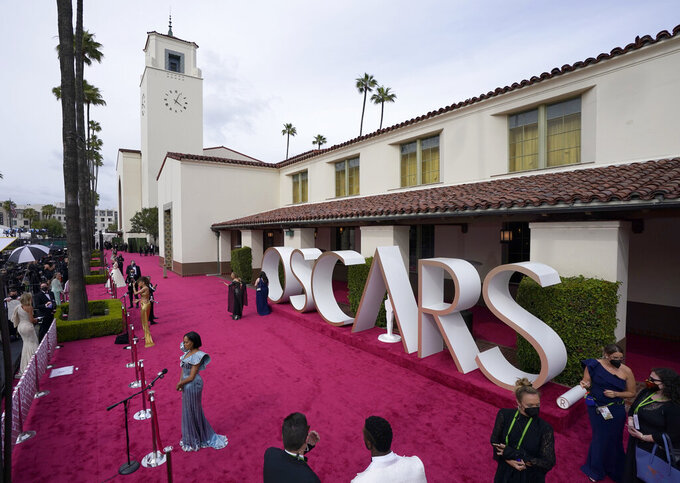 NEW YORK (AP) — The Academy Awards television audience plunged to 9.85 million viewers on ABC, less than half of the Oscars' previous low and continuing a startling trend of viewer tune out for awards shows.

The Nielsen company's preliminary estimate shows that the audience who watched “Nomadland” win best picture on Sunday was 58% below last year's tally of 23.6 million, which had set the previous record for least-watched Oscars telecast.

Following a year where movie theaters were mostly closed due to COVID-19, people were unexcited about or unfamiliar with movies they primarily streamed at home. Producers tried to fight through pandemic fatigue with a hostless program and a small, socially-distanced audience that didn't wear masks during the broadcast.

The event drew mixed reviews, and renewed questions about the types of movies the industry makes and wants to honor.

“It was agonizing for me to get through the show last night. It was pure torture,” said Marc Berman, a veteran television analyst who writes the “Programming Insider” newsletter, on Monday.

The Oscars do best in years when popular movies are up for awards — the telecast drew 55 million viewers when “Titanic” won best picture in 1998 — but no movie came close to that impact. As a result, viewers sat through “long acceptance speeches from people you don't know in movies you never heard of,” Berman said.

To be fair, all awards shows have been in a ratings free-fall. Both the Golden Globes (6.9 million viewers) and Grammy Awards (9.2 million) had record low audiences this year.

The normal glitz, glamour and excitement of these programs have been muted by the pandemic. Instead, producers have had to deal with live audiences either limited or non-existent, presented to an audience already sick of seeing people on Zoom.

Robert Lloyd, critic for The Los Angeles Times, noted that Academy Awards producers Steven Soderbergh, Stacey Sher and Jesse Collins wanted to have the program look more like a film. Instead, “it actually dulled the image and made a live event feel less so,” Lloyd wrote. “In a bid for elegance, the broadcast courted sluggishness.”

More than ever, the Oscars needed to simply show more of the movies they were honoring, wrote Darren Franich in Entertainment Weekly.

But there were relatively few clips. The show lacked production numbers and was light on scripted comedy. Winners were also not rushed offstage with music designed to shorten acceptance speeches — for better or worse.

“Sunday’s broadcast on ABC was more like a cross between the Golden Globes and the closing-night banquet of a long, exhausting convention,” wrote Mike Hale in The New York Times.

The show took some risks creatively, although one of them — ending the night with the best actor winner instead of building up to the best picture honoree — may have proved disorienting to some viewers.

Some of the other problems pulling people away from awards shows are not unique to the movie industry. Entertainment audiences are splintered, with fewer events pulling people together communally. And instead of sitting through hours of minor awards, many people know they see special moments, like Glenn Close shaking to “Da Butt,” on social media feeds later.

But there are things unique to the industry that people making movies must take into account, said Sasha Stone, founder and editor of the Awards Daily web site.

The Academy Awards have “painted themselves into a corner” by honoring movies that appeal to critics and people who cover and talk about the awards, instead of the general public, she said. The show risks becoming like the Tony Awards, which is watched primarily by a niche audience that knows the New York theater world well, she said.

Now, Stone said her 22-year-old daughter and her friends believe the Academy Awards are only interested in a certain kind of movie — and they aren't being flattering.

It wasn't long ago that the Oscars were often the second most-watched television program of the year after the Super Bowl. For most of the 2000s, the Academy Awards audience was in the 35 million to 45 million range each year. Only six years ago, in 2015, the Oscars reached 37.3 million people, Nielsen said.

In an eviscerating monologue last week, HBO's Bill Maher took aim at the subject matter of films that were nominated for Oscars this year.

“I don't have to leave the theater whistling, but would it kill you once in a while to make a movie that doesn't want to make me take a bath with a toaster?” he said. “We all had a rough year. A little escapism would have been appreciated.”