Adopted US moguls skier eyes return to China as Olympian 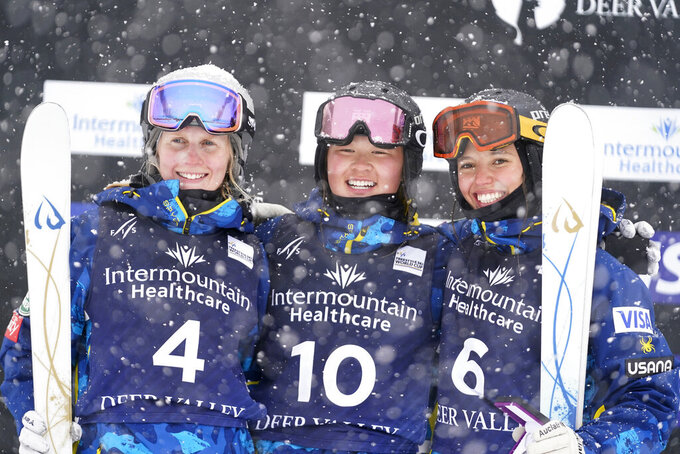 FILE - Kai Owens, center, celebrates after finishing first in the finals, between Hannah Soar, left, who finished second, and Tess Johnson, who placed third, in the World Cup women's dual moguls skiing competition Friday, Feb. 5, 2021, in Deer Valley, Utah. As an infant, she was abandoned at a town square in a province of China. Taken to an orphanage, she was adopted by a couple from Colorado at 16 months. Now 17, U.S. freestyle skier Kai Owens is on the verge of earning a spot in moguls for the Winter Games in Beijing. It's a return to China she's long thought about. (AP Photo/Rick Bowmer, File)

DENVER (AP) — The jade necklace was a present. These days, it serves as a reminder, and maybe even a symbol of more good things to come.

Amy and Jonathan Owens gave that necklace to their adopted daughter, Kai, years ago. It was one of the gifts they gave every year to Kai, who they adopted when she was around 16 months old. Before that, Kai had been nurtured in an orphanage after being left by her birth parents at a town square in China.

Now 17, the U.S. moguls skier is in the mix to return to China in February, possibly to be discovered again, but this time, in a much different way.

As Kai gears up for the Olympics in the country she was born, it would be hard to blame her for thinking the jade necklace might look fabulous paired next to another color — maybe bronze, or silver, or gold.

“Some serious stars aligned for me to be here today,” said Owens, who’s in the running to make the U.S. freestyle team with four qualifying events remaining. “It’s tough as a kid, thinking about being abandoned and left. But I found a great home, a great passion for something that I love and I have a great family. I’m certainly grateful and lucky.”

The baby, then known as “Shiqi,” was adopted from an orphanage in the Anhui Province, a day’s drive from Beijing, and taken to the mountains of Colorado, which is where her passion for skiing sprouted.

She is, in many ways, a typical American teen, complete with a Nike Air Jordan shoe collection and a French bulldog named Mochi. She also embraces her roots, celebrating Chinese traditions and wearing the jade necklace for health and good luck.

Her name, Kai, translates into “victorious,” and no matter what happens over the next few weeks, she feels as though she’s won.

“When they’re handed to you, it’s a blank slate,” said Amy, whose family, which includes 13-year-old son Bode (also adopted from China) lives in Vail. “You have no idea what’s going on, what their proclivities will be. We just hoped that she was going to be a ski enthusiast because we are.”

Reports from the nannies at the orphanage described Kai as tough and obstinate, and as the baby who needed to be hugged first each morning.

Her mom laughs at that now. It makes sense.

To commit to moguls skiing is to commit to a lifetime of bone-jarring bumps, as the skiers attempt to time out two perfect jumps in between a series of tightly spaced moguls that must be perfectly traversed at speeds of up to 20 mph.

But when Kai went all in, there was no stopping her.

At 14, she became the youngest American to win a NorAm moguls competition. She was named the women's 2020-21 moguls rookie of the year as part of the freestyle & freeski World Cup awards. Though it is still very early, it at least gives her a chance to join the likes of Jonny Moseley, Jeremy Bloom and Hannah Kearney on the short list of American moguls greats.

Her most relevant connection, though, might be with another American icon — Toby Dawson.

Dawson, the 2006 Turin Games moguls bronze medalist, received pre-Olympic notoriety for his backstory: Living in a South Korean orphanage, he was adopted around 3 by two ski instructors and brought to Colorado where he discovered freestyle skiing. His story begat dozens of would-be parents who came forward claiming Dawson was their child. He had to sort through all that, then used genetic testing to find who his real parents were.

Dawson’s brush with his past led to a reconnection with his native country, too. At the 2018 Pyeongchang Games, he was a coach for the Korean freestyle team. Now, he's leading the Chinese moguls squad.

His advice to Owens regarding her birth parents is simple: “Definitely, the low expectations is key," Dawson explained. “They’re going to have to earn her trust back because there was some reason that she was put up for adoption. She got placed into an amazing home, like I did, and had great opportunities.”

Kai knows nothing about the “Why?” — why she was left? Someday, she would like to know the reason and the circumstances surrounding her abandonment.

“I think it would be definitely emotional — emotional and tough for me to kind of face them. But I would,” Kai said. “I would definitely tell them, ‘Yeah, I’m all right.’”

For decades from the 1980s, China limited most couples to one child — which the Owens family says is as good a guess as any as to why Kai was left in the town square.

Five years ago on “Gotcha Day," Kai received the jade necklace. These days, she rarely takes it off.

It’s a necklace that has been lost and found again. It’s been a source of pride and confusion for Kai over the years — a memento that’s come to represent her adoption journey.

“Because I think she thought that was sort of a distraction. She’s super hyper-focused on her sport. So she just wanted to put it aside. But she’s ready to just accept it and recognize that, ‘I’m traveling away from my family, and I might need some of this support from this jade necklace.’”

The family had plans to travel to China last summer for a visit. It would’ve been a way to reduce some of the anxiety over her possible return for the Olympics. But the restrictions due to the pandemic nixed that idea. So she may be heading to China — without her family because of COVID-19 but hardly feeling alone.

“My parents have done an incredible job of making sure that we know we’re well loved,” Kai said. “I think it will just be really cool to go back there.”