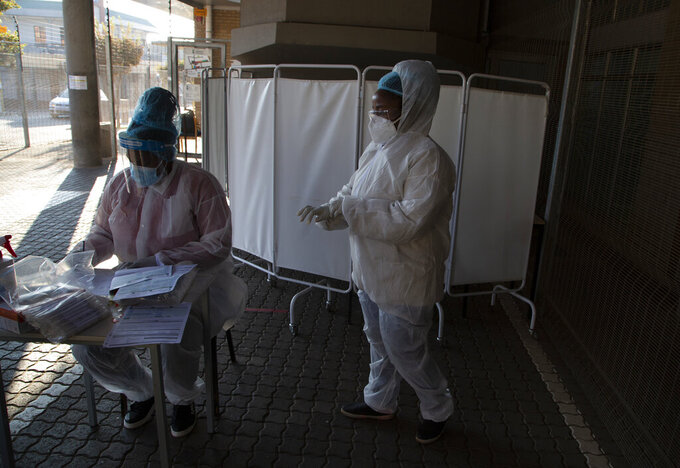 FILE - In this Tuesday, June 22, 2021 file photo, healthcare workers prepare to test patients for COVID-19 at the Lancet Laboratories in Johannesburg. Africa is facing a devastating resurgence of COVID-19 infections whose peak will surpass that of earlier waves as the continent's countries struggle to vaccinate even a small percentage of the population, top health officials said Thursday June 24, 2021. (AP Photo/Denis Farrell, File)

DAKAR, Senegal (AP) — Africa is facing a devastating resurgence of COVID-19 infections whose peak will surpass that of earlier waves as the continent's countries struggle to vaccinate even a small percentage of the population, top health officials said Thursday.

"With rapidly rising case numbers and increasing reports of serious illness, the latest surge threatens to be Africa’s worst yet,” she said in a weekly briefing. “Africa can still blunt the impact of these fast-rising infections, but the window of opportunity is closing. Everyone everywhere can do their bit by taking precautions to prevent transmission.”

New cases have been rising since the beginning of May and the resurgence will surpass previous waves by early July, according to WHO Africa.

Decreased observance of public health measures, increased social interactions without masks and new variants have contributed to more cases. Moeti encouraged governments to do more to provide populations with easier access to masks and hygiene facilities.

The delta variant that has devastated India has been detected in at least 14 African countries including Congo, Mozambique, Namibia and Uganda.

The delta variant “may have played a very significant role,” in the “very devastating” third wave of COVID-19 in at least 20 countries across Africa, the director of the Africa Centers for Disease Control and Prevention, John Nkengasong, said Thursday.

“The third wave is extremely brutal,” he said, adding that more and more health centers are saying they are overwhelmed. African countries urgently need vaccines to help battle the disease, he said.

“We are completely lagging behind, we just don’t have vaccines,” Nkengasong said.

Africa has more than 5.2 million confirmed virus cases including more than 139,000 deaths, according to the Africa CDC.

The U.N.-backed COVAX initiative to provide vaccines to low- and middle-income countries, has not met its goals of equal access, said officials.

More than 80% of COVAX vaccine supplies have been used by just 18 African countries, with eight running out of stocks.

“Our work in COVAX has been hugely challenged by the vaccine availabilities,” Moeti said, adding that WHO is willing to consider all available vaccines and will do everything possible to ensure that the vaccines become available at the global level.

“Our objective is really to get the vaccines out there and reduce the inequity that is the situation at present,” she said.

She criticized restrictions that may also exacerbate the inequities, arguing that Africans should not also face more travel restrictions because they are unable to access the same vaccines available elsewhere.

“Let’s not add injury to injustice,” she said. “Vaccine shortages are already prolonging the pain of COVID-19 in Africa.”