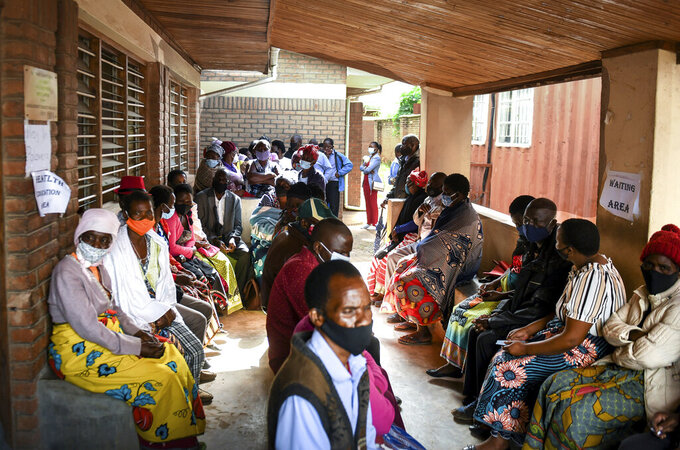 People wait to receive the AstraZeneca COVID-19 vaccine at Ndirande Health Centre in Blantyre Malawi, Monday, March 29, 2021. Malawi is vaccinating health care workers, elderly and those with health conditions that put them at higher risk of severe COVID-19, using the AstraZeneca doses that arrived early in March. (AP Photo/Thoko Chikondi)

DAKAR, Senegal (AP) — Africa is unlikely to meet its targets for vaccinating the continent against COVID-19 if supply delays from a key Indian manufacturer continue, the director of the Africa Centers for Disease Control and Prevention warned Thursday.

Dr. John Nkengasong told a press briefing that officials hope the problems at the Serum Institute of India will only be temporary otherwise “it would definitely impact our ability to continuously vaccinate people.”

"I really want to deliberately hope that it is a delay — not a ban — because that would be catastrophic,” he said.

More than half of the 29.1 million vaccine doses received by African nations so far have come through the global COVAX initiative, which aims to ensure that low- and middle-income countries have fair access to vaccines. COVAX has largely relied on distributing the AstraZeneca vaccine, because it is cheaper and only requires ordinary refrigeration.

But the Serum Institute of India recently announced that as many as 90 million doses of the AstraZeneca vaccine destined for COVAX worldwide will be delayed through the end of April as India’s government grapples with a spike in infections among the country's 1.4 billion people.

Nkengasong said it is not yet known what impact the uncertainty might have for scheduling second doses of the AstraZeneca vaccine in African countries.

“We are tracking that very, very closely,” he said Thursday. “I’m sure countries are still trying to finish vaccinating their first round of the vaccines that were received.”

Nkengasong remained optimistic, though, that a deal announced on Monday for African countries to acquire the single-dose Johnson & Johnson vaccine remains “an historic moment and a game-changer.”

The agreement with the African Union's African Vaccine Acquisition Trust calls for 220 million doses to be delivered by the third quarter of this year, with an option to acquire an additional 180 million doses through 2022.

If those 400 million people receive the Johnson & Johnson vaccine, it would represent more than half the continent's goal of 750 million, Nkengasong said.

Africa has confirmed more than 4.2 million cases and 112,000 deaths, but since most countries on the continent lack the means to track mortality data, it is not clear how many excess deaths have occurred since the pandemic began.