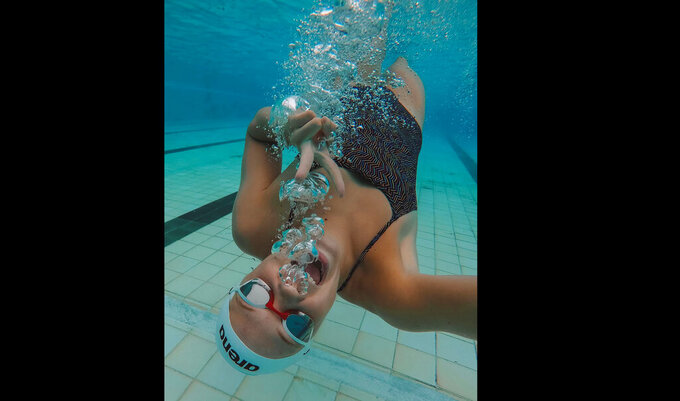 This is a Feb. 5, 2019 photo provided by Olympic swimmer Erin Gallagher of her swimming under water in Durban, South Africa. Gallagher got COVID-19 late last year and went from elite Olympic athlete in peak condition to lying flat on a bed concentrating on just breathing. And yet she's one of the lucky ones. She recovered and is going to Tokyo. Other African hopefuls have not been so fortunate as the coronavirus surges again across the continent just as the Olympics approach. (Erin Gallagher via AP)

In the span of a few days, she went from elite Olympic athlete in peak condition to lying flat on a bed concentrating on the most basic of physical functions. Just keep breathing, she told herself.

The Tokyo Olympics and the dream she’d been chasing for years suddenly seemed out of reach.

“Those were extremely dark times,” Gallagher said. “I couldn’t really see any possible way where I could get to Tokyo. In the back of my mind there was this voice saying, ‘Erin, you’re not going to make it, I don’t think, so rather quit now and just focus on regaining your health.’”

Gallagher's brush with the coronavirus late last year was extreme and yet she's one of the lucky ones, even if it took her months to fully recover. She came through it with her health and Olympic ambitions in tact. The 22-year-old is heading to the Games as part of a South African women's medley relay team expected to contend for a medal.

No such luck for many other African hopefuls.

As the virus surges again across the continent just as the Olympics approach, the pandemic has done more than just upend plans and make training, traveling and getting precious pre-Games competition tricky for Africa's athletes. It has ruined dreams.

Take the Senegal basketball team, which made it to the final qualifying tournament for Tokyo last month, only for three players and an official to test positive for the virus on the eve of the competition. The entire squad was sent home, with no chance at the Olympics even for the players not infected and years until another opportunity comes along.

At 33, Nigerian basketball player Micheal Eric probably won't get another shot. He contracted the virus and, though he was cleared to return to Nigeria's squad after two weeks in isolation, he said he realized he was “in no physical shape to compete." He withdrew from the squad and gave up what's likely to be his only chance to go to the Olympics.

“Being an Olympian has been my lifelong dream," he said. “But I know I must do what’s best for my health and well-being."

Even one of the biggest names hasn't been spared. World record-holder David Rudisha of Kenya won't be in Tokyo seeking a third consecutive gold medal in the 800 meters after the 32-year-old's attempts to qualify following injuries were complicated by the pandemic. So might end the Olympic career of one of track's great middle-distance runners.

While there's probably not an Olympian on the planet who hasn't faced a COVID-19-related challenge over the last 18 months, Africa's new wave of cases and desperate vaccine shortages have led to lockdowns being reinforced and the return of training restrictions, partly because no one wants to get the virus now with just weeks to go.

Ghana's boxing team went months without sparring against other fighters because of fears of virus transmission and have still barely laid a glove on an opponent in the run-up to Tokyo. Instead, the Ghanaians have resorted to shadow boxing in front of a mirror in their own rooms at a team hotel in preparation for the biggest competition of their lives. Instructions from their coach are delivered via WhatsApp from his room down the hall.

"It's just yourself in your room and trying to just keep up with a regime that will put you in shape for a competition that you want to make a mark at,” flyweight Suleimanu Tetteh said.

For decades, Kenya's dominating distance runners have trained for the Olympics in groups of 30 or more and alongside budding young athletes they use as pacemakers. Not this year.

Frustrated at restrictions, Moroccan judoka Soumaya Iraoui gave up on her regular training regime to research the art of “mental imagery,” she said. She's spent much of her time working on her mental focus while home alone.

The isolation of the pandemic hasn't bothered Zimbabwean rower Peter Purcell-Gilpin, who competes in the single scull and trains alone. "I'm isolated most of the time,” he said.

But he needed water and time with his coach in person before Tokyo. So he traveled from his training base in Britain to Zambia in southern Africa so he could link up with his Zimbabwe-based coach and do some work for three months in real conditions on open water.

"You have to focus on the controllables and make the best plan that you can,” Purcell-Gilpin said.

Gallagher's struggle with COVID-19 didn't end when her main symptoms subsided. When she returned to swimming she was exhausted after just a few laps, experienced chest pains and visited a cardiologist, who assured her that her heart was fine. It just needed time.

She spent hours training in her own pool at home, getting past the problem of it being way too small by connecting herself to an elastic rope and swimming on the spot.

Her coronavirus experience was ultimately enlightening, she said. She thought she was ready to listen to that voice that told her to give up on the Olympics. But the virus also revealed what going to the Games really meant to her.

“There was another voice saying, 'Erin, don’t give up, this has been your dream all your life,'" she said. "'You have to do everything you possibly can to get there.'"