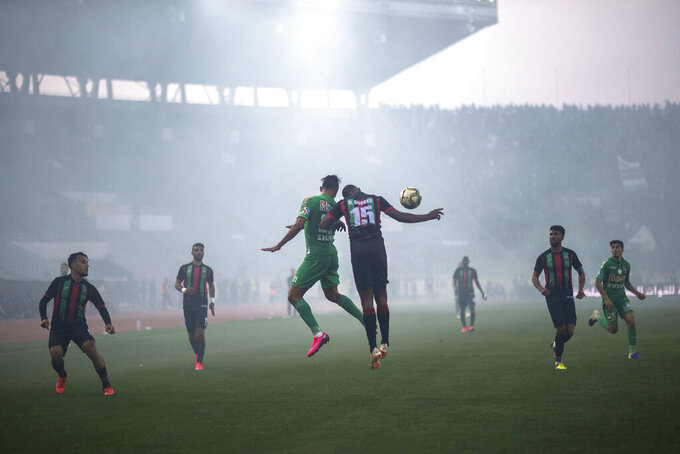 FILE - In this Wednesday, Feb. 12, 2020 file photo, players of FAR Rabat soccer team and their rivals Raja Casablanca compete for the ball during a match in the Moroccan league, in Rabat, Morocco. The Confederation of African Football agreed Thursday, Oct. 22, 2020 to delay one of its Champions League semifinal second leg games because players and officials of Moroccan club Raja Casablanca have been put in quarantine after a coronavirus outbreak in the squad. (AP Photo/Mosa'ab Elshamy, File)

CAPE TOWN, South Africa (AP) — The Confederation of African Football agreed Thursday to postpone one of its Champions League semifinals because players and officials of Moroccan club Raja Casablanca have been put in quarantine after a coronavirus outbreak in the squad.

Raja was meant to travel to Egypt to play Zamalek on Saturday for a place in the African Champions League final.

But with eight Raja players testing positive for the virus, the team was forced into isolation by Moroccan health authorities on Tuesday, CAF said. CAF decided to postpone the second-leg game until Nov. 1. Raja then announced another six players had tested positive.

Moroccan authorities also canceled the special permission given to Raja players and officials to travel outside the country until at least next Tuesday, when there will be another round of tests at the club.

A team that doesn't show up for a game would normally forfeit but CAF said its committee for club competitions decided to postpone considering the circumstances faced by Raja. The pandemic “requires temporary adaptations to be made to regulations,” CAF said.

The virus has also affected CAF's other major club competition, the CAF Confederation Cup, which is Africa's version of the Europa League. Guinea champion Horoya was badly depleted by an outbreak ahead of its semifinal against Egypt's Pyramids on Tuesday, also in Casablanca.

Horoya had just 14 senior squad players available for the semifinal — 12 outfield and two goalkeepers — and lost 2-0.