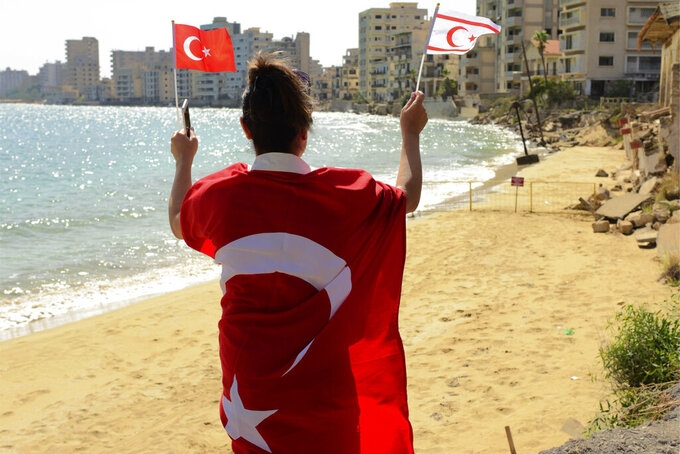 CORRECTS SPELLING OF LOCATION A woman with Turkish and Turkish Cypriot breakaway flags walks along at the beach with abandoned hotels after police open the beachfront of Varosha, an uninhabited, fenced-off suburb in war-divided Cyprus' in the Turkish occupied area in the breakaway Turkish Cypriot north on Thursday, Oct. 8, 2020. The United Nations and the European Union have expressed concern that Turkey's move to open the beachfront could hinder renewed efforts to reunify the island, split in 1974 when Turkey invaded following a coup by supporters of union with Greece. (AP Photo/Nedim Enginsoy)

NICOSIA, Cyprus (AP) — The pristine, azure waters lapping at the skirts of uninhabited Varosha contrast sharply with the dilapidated, crumbling buildings lining the beachfront of this abandoned suburb of Famagusta.

For the first time in 46 years, members of the public were permitted on Thursday to access the beach of Varosha in the breakaway Turkish Cypriot north of ethnically divided Cyprus.

Hundreds filed through a gate manned by Turkish Cypriot police to walk on a freshly paved asphalt road leading to the beach that was the jewel of what was once Cyprus' premier tourist resort. The road was lined on both sides with police tape to prevent pedestrians straying into windowless homes and rusting business, some swallowed up by decades-old, snake-infested undergrowth.

For some, like one woman draped in the Turkish and Turkish Cypriot flags, it was a moment of joy to witness an “historic” moment.

For others, like Greek Cypriot Varosha native Kyriakos Charalambides watching on TV from his Nicosia home, it was a moment of bitterness and sorrow. “Even though I expected this, I shuddered as I watched those familiar places,” Charalambides, a playwright, told the Associated Press. “It’s a sorrow that cannot be consoled ... Varosha is lost.”

The decision, by Turkey and the breakaway Turkish Cypriot state recognized only by Ankara, to open the mile-long stretch of beach was roundly condemned by the island’s Greek Cypriot-run, internationally-recognized government.

Varosha’s Greek Cypriot inhabitants fled as Turkish troops advanced in 1974, when Turkey invaded following a coup by supporters of union with Greece. Since then, the area was placed under Turkish military control, cordoned off and left to the ravages of time.

Cypriot President Nicos Anastasiades condemned the opening as a “flagrant violation of international law” and United Nations Security Council resolutions that consider attempts to settle any part of Varosha — Maras in Turkish — by anyone other than its inhabitants as “inadmissible.” The resolutions also call for the area to be transferred to U.N. administration.

Greek Cypriots fear the beach opening is only a first step to Turkey and the Turkish Cypriots completely taking over Varosha.

Anastasiades said in a statement Thursday that his government has already protested to the U.N., the European Union and other international organizations. He repeated that the “unilateral” action could hinder attempts at relaunching stalled talks to reunify the island.

Former Varosha residents staged a demonstration late Thursday at a crossing point along a U.N. controlled buffer zone to voice their opposition to the opening. The checkpoint — one of nine from which Greek Cypriots and Turkish Cypriots can cross on either side — was shut on the Turkish Cypriot side as part of measures to counter the spread of COVID-19.

“How can someone not be upset by what they have seen today?” the Greek Cypriot mayor of Famagusta, Simos Ioannou told the Associated Press. “Varosha should have been handed over to its rightful owners ... this is psychological pressure.”

But Turkish and Turkish Cypriot officials insist the move is to everyone’s benefit and that the rights of Greek Cypriot property owners aren’t affected since it’s only the beach that’s opening for now.

Turkish Foreign Minister Mevlut Cavusoglu said an inventory on all the properties within Varosha is currently underway to determine what will happen with the rest of Varosha.

But at least for now, the opening of the seafront and some roads where there is no private property was important,” Cavusoglu said after a meeting on Thursday with his Greek counterpart, Nikos Dendias.

“It will be useful to take such steps that are to the benefit of all, that respect private property rights, without violating U.N. decisions,” Cavusoglu said.