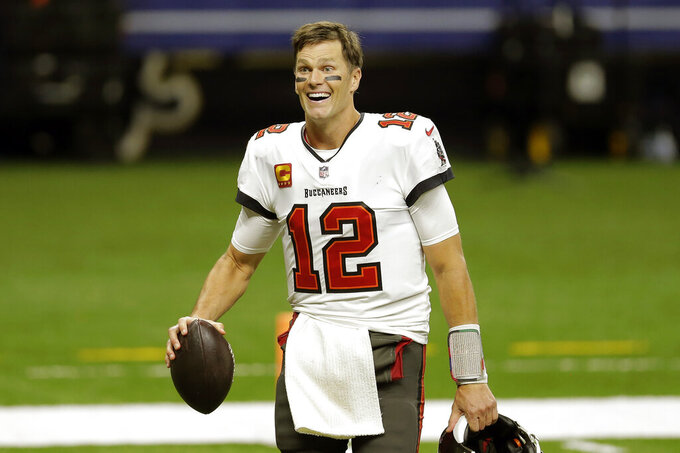 FILE - Tampa Bay Buccaneers quarterback Tom Brady leaves the field an NFL divisional round playoff football game against the New Orleans Saints in New Orleans, in this Sunday, Jan. 17, 2021, file photo. om Brady has agreed to a contract extension with the Buccaneers that provides the Super Bowl champions with much-needed salary cap relief and will help the seven-time NFL champion reach a goal of playing until he’s at least 45. Brady posted a picture of himself on Twitter, signing the extension Friday, March 12, 2021, with the message: “In pursuit of 8 ... LFG@ Buccaneers we’re keeping the band together.” (AP Photo/Brett Duke, File)

Don't look for the usual frenetic spending sprees in NFL free agency this year. Who says? Some top NFL agents.

An 8% reduction in the salary cap, the result of a drop in revenue due to the coronavirus pandemic, will impact the market, which officially opens Wednesday, though the “legal tampering” period begins Monday.

After playing in empty or mostly empty stadiums in 2020, teams knew the drop was coming. While the reduction from $198.2 million to $182.5 million is expected to be a one-season anomaly, teams will nonetheless have to be more careful and economical during free agency, those agents believe.

Though some things will remain the same, with perhaps a bit of a twist.

“The big-time guys are still going to get their money,” agent Joe Linta said. “There’s going to be a lot more caution exercised by the teams. Agents may not have as many teams willing to participate. Where you might have had six or eight teams two years ago that would jump in on a player, maybe only three or four of those eight have enough money to play the game.

“You have to look at it in the framework of the team that you’re dealing with. The teams that have a ton of money, you can kind of go business as usual. And if a team is really strapped, then you have to be mindful of that, or maybe you can’t go to that team.”

Linta points out that a third to a half of the 32 teams “are in some peril” with their salary cap number.

“If you’re looking for a big deal, it’s hard to get it with, like, let’s say the Saints right now,” he said. “If you’re an unrestricted free agent, it’s hard to get a huge deal with a team that has no cap room. The deals are still going to be there, but there’s probably a lesser amount of teams that can actually offer the big deals.”

The Rams, Saints, Eagles and Bears are significantly over the cap. All but the Eagles made the playoffs last season.

On the flip side, the Jaguars, Patriots and Jets are all about $60 million under the cap. All missed the playoffs.

“I think the Jets are going to turn it around,” Linta said. “We’ll see what happens in Jacksonville. In Jacksonville you have no state tax. There’s variables in each team. Money still rules the roost. If you want to go to a Super Bowl contender, or you want to give up money for that, every person’s different individually.”

This is the first decrease in the cap since 2011, which followed an uncapped season. Since 2014 it went up at least $10 million a year. The biggest jump was from 2015-16 when it increased just less than $12 million.

Agent Leigh Steinberg, who has represented a number of Hall of Famers and Super Bowl MVPs in a 46-year career, said clubs will have to make cuts.

“The question is where those cuts will come. Will it be not awarding quite as big salaries to veterans? Will it be offering less in free agency contracts? Will it be the cutting of current players? In some way, teams will have to economize,” said Steinberg, the real-life “Jerry Maguire” whose agency represents Patrick Mahomes, the 2018 NFL MVP who was also MVP of Kansas City’s Super Bowl victory against San Francisco two seasons ago.

“As it is, we’ve evolved into a two-tiered system of handsomely paid veteran stars and the remainder of the roster, which has to heavily be made up of players playing for the minimum,” Steinberg said. “This will continue because to pay the quarterback $35 million and pay the left tackle $15 million, that cap doesn’t afford enough flexibility. It requires them to have large numbers of (less expensive) free agents and people playing at the minimum to be able to balance out the numbers.”

Steinberg said Arizona’s signing of J.J. Watt to a two-year contract worth $31 million was the first test of where trends are going. Watt’s contract will be only a $4.9 million cap hit in 2021.

“He has a big, handsome guaranteed contract. But to do that, it gives lower-round draft picks and undrafted free agents a better chance to make teams because they become essential to cap management,” Steinberg said. “And again, the cap has already destroyed the concept of depth. So if you have an A-plus left tackle, his substitute might be on a grading system, a C.

“These cuts will have the effect of putting a greater emphasis on injury because we saw what happed to Kansas City in the Super Bowl. They’re missing their two tackles. There’s no room to afford, if we were using a grading system, a B-plus tackle behind the A or A-plus. It alters the course of a season or a game dramatically.”

Steinberg noted the lower salary cap “can have the effect of breaking up happy marriages, which is a player who has been productive for a team, now the team wants to adjust his salary down so they can be more cap friendly, that’s a hard thing for many veterans to do because they’ve been at a certain level. I think you’ll see ultimately players who have been some place for a long time but maybe are coming into the peak of their career, they’re at it or past it, some of those players are going to face a difficult choice of taking much less money or not being on that team.”

Steinberg said some free agents might sign for one year or agree to a lighter first year in exchange for guarantees later on.

Linta added that the lower cap could affect competitive balance because if teams had been operating on the assumption it would be higher, “now you’re getting punished and the teams that are a little more frugal are really sort of sitting in the catbird seat now, which might be an unintended consequence of being cheap.”

Agent Don Yee, whose clientele includes five-time Super Bowl MVP Tom Brady, said the reduced cap will cause teams, agents and players “to make recalibrated analyses on just what the market actually is.”

“If you’re on the receiving end of the decrease, any decrease is always significant. But to some degree, speaking about the decrease in the cap size is a sleight of hand in that at the end of the day, every organization has the discretion to choose to spend significant amounts of cash well above any advertised cap figure,” Yee said.

“If you resorted to certain accounting tricks and maneuvers to spend cash in excess of the cap ceiling, the conventional wisdom is that at some point in the future that bill will come due. But oftentimes that’s also the price of winning,” Yee added.

The agents say the cap drop is an anomaly. The NFL is close to extending its broadcast deals, with the astronomical numbers expected to double in many cases, and fans very well could be back at games in the fall.

“I see this year as an aberration,” Yee said. “And it will be survivable by all parties involved, particularly when you consider we’re all very lucky to be in an industry that came through the pandemic and there are far more people struggling with greater problems than the football industry.”