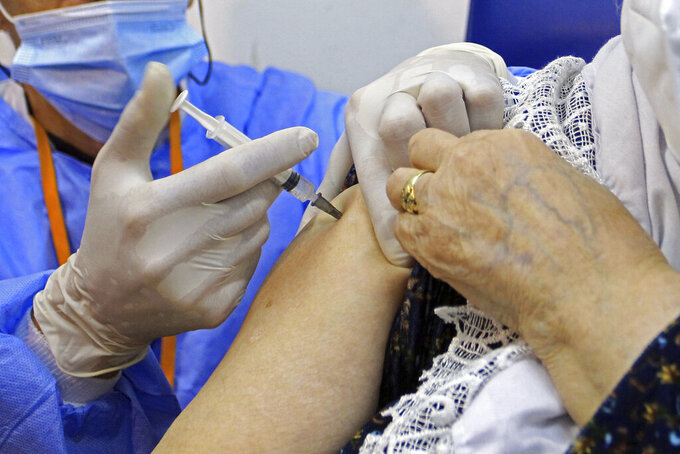 A woman receives the Sputnik-V COVID-19 vaccine at a vaccination center in Blida, south of Algiers, Algeria, Saturday, Jan. 30, 2021. The vaccines were delivered to the Boufarik military airport west of Algiers, Minister Amar Belhimeur said in a statement. He did not indicate how many arrived, though the government had said it had ordered a first batch of 500,000 Sputnik doses. (AP Photo/Fateh Guidoum)

ALGIERS, Algeria (AP) — Algeria launched its coronavirus vaccination campaign Saturday in the city where the country's first COVID-19 case was confirmed in March.

The North African nation is using Russia’s Sputnik-V vaccine, and a 65-year-old retiree received the first shot at a hospital in Blida, a city about 40 kilometers (25 miles) southwest of the capital, Algiers. Health authorities were on hand for the event.

“All measures have been taken to ensure a good rollout of the vaccination campaign on the national territory,” Health Minister Abderrahmane Benbouzid said.

Vaccines will get administered in all regions of the country starting Sunday with health care workers, elderly adults and other vulnerable populations.

Health worker Yacine Ali Messaoud, who received a shot of Sputnik-V on Saturday, told The Associated Press he “came to set an example for the young people of my region and Algerians in general, so they don’t feel fear and can be vaccinated."

Algerians were frustrated this month by repeated delays in vaccinations after promises of an imminent rollout. Concerns are also growing about Algerian President Abdelmadjid Tebboune, who has been convalescing for more than a month at an undisclosed location in Germany after suffering COVID-19 side effects.

"There are a lot of people. We have just vaccinated about 20 people with chronic diseases who are under observation. So, it’s going very well,” the doctor.

Algeria received its first shipment of the Russian vaccine Friday at the Boufarik military airport, west of Algiers. Authorities did not indicate how many doses arrived, but the government had said it ordered a first batch of 500,000.

The government said it is negotiating to acquire the Oxford-AstraZeneca vaccine.

Algeria has reported more than 106,000 confirmed and at least 2,884 deaths in the pandemic.