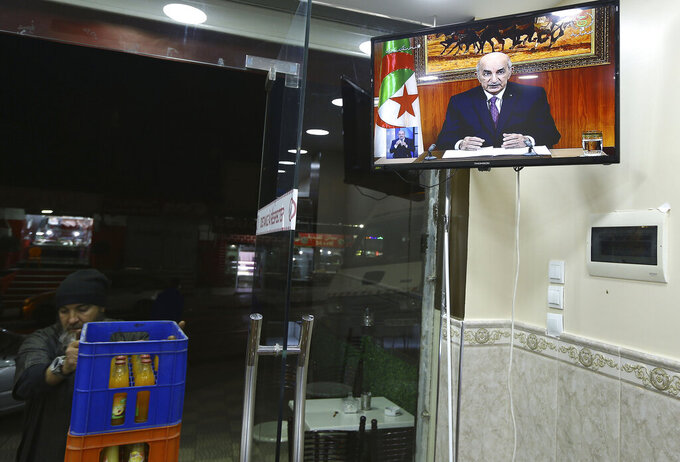 A man closes a restaurant while Algerian President Abdelmadjid Tebboune speaks on television, Thursday, Feb.18, 2021 in Algiers. Algerian President Abdelmadjid Tebboune announced he will dissolve parliament to pave the way for new elections and ordered the release of 32 protesters whose pro-democracy movement pushed out his predecessor two years ago. However he didn't set a date for the elections yet, and protesters want deeper change to Algeria's still-secretive power structure. (AP Photo/Fateh Guidoum)

ALGIERS, Algeria (AP) — Algeria’s president announced Thursday he would reshuffle the government and dissolve parliament to pave the way for new elections, and ordered amnesty for 32 protesters whose pro-democracy movement pushed out his predecessor two years ago.

In a speech on national television Thursday night, President Abdelmadjid Tebboune said that within 48 hours he would replace government ministers “who didn’t live up to their responsibilities,” without specifying whom.

He didn’t set a date for new parliamentary elections, but encouraged young people to run for office and promised to cover their campaign costs, without elaborating.

A new parliament and a greater voice for young people were among demands of the Hirak protest movement, which is marking its second anniversary on Monday. Many protesters feel Tebboune’s gestures so far have been largely cosmetic, and note he is a product of the long-time political elite.

Tebboune himself disappeared for public view for months after contracting the coronavirus. He returned from a second hospital stay in an undisclosed location in Germany last week, and invited opposition parties to political consultations, according to a statement from his office.

The current parliament was elected in May 2017 for a five-year term. But the elections were marred by accusations of mass fraud, notably targeting the majority parties FLN and RND, who supported former President Abdelaziz Bouteflika. The former FLN chief, Djamel Ould Abbas, is currently in prison for illegal campaign financing.

New electoral rules ordered by Tebboune would aim to limit electoral fraud, change voting methods and require an equal number of women and men candidate in cities larger than 20,000 people.

Thursday’s announcements come as Algeria is struggling economically because of a protracted slump in oil prices and the coronavirus pandemic. The country is heavily dependent on gas and oil revenue.