All for nothing: Athletes qualify but end out of Olympics 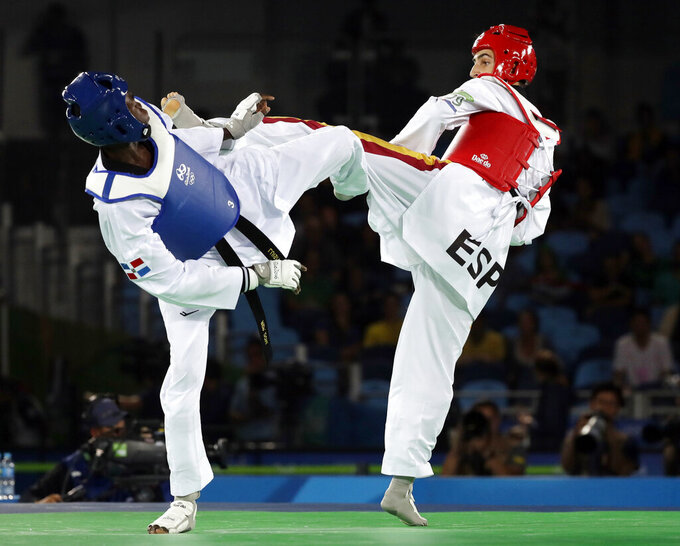 FILE - In this Aug. 17, 2016, file photo, Luisito Pie, of the Dominican Republic, left, and Jesus Tortosa, of Spain, compete in a men's Taekwondo bronze medal final at the 2016 Summer Olympics in Rio de Janeiro, Brazil, Wednesday, Aug. 17, 2016. One of the world's top-ranked taekwondo fighters is taking vacation in the Dominican Republic instead of competing at the Tokyo Olympics after being surprisingly excluded from the Games by the Spanish federation. Tortosa is among a few athletes worldwide who earned Olympic qualification but won’t be in Japan because in some sports the final decision on picking the teams is made by the local federations. (AP Photo/Andrew Medichini, File)

MADRID (AP) — As one of the top-ranked taekwondo fighters in the world, Jesús Tortosa was ready to start packing for the Tokyo Olympics.

He had been preparing for it for the past five years and had earned the right to be in Japan with results that earned him Olympic qualification. But instead of making the trip to Tokyo along with the rest of the Spanish team, Tortosa is taking vacation in the Dominican Republic after being excluded from the Games by the local taekwondo federation.

Although Tortosa is No. 2 in the world and No. 4. in the Olympic rankings, the Spanish federation picked a lower-ranked athlete to go in his place based on a “technical decision.”

Tortosa, who said the decision was more political than technical because his father opposed the current federation president in recent elections, is among the few athletes who qualified for the Games but will not be allowed to compete because in some Olympic sports the final decision on who makes a country’s squad is in the hands of the local federations.

Similar cases happened in the English badminton team and in the Russian fencing squad, and a couple of Japanese climbers secured their spots only after a ruling by the Court of Arbitration for Sport.

“I’m going away on vacation because I don’t want to see anything related to these Games," the 23-year-old Tortosa told The Associated Press on Tuesday, just hours before boarding his flight to the Dominican Republic and only three days before the opening ceremony of the Tokyo Olympics. "I want to disconnect completely. It was a big disappointment to have it taken away from me after I had been preparing for it for so long.”

He said he was caught by surprise by the decision, which came a day after he had taken his COVID-19 vaccine to travel to Japan. He has been outspoken against the federation since then. Dozens of people joined him in a protest in Spain last month.

“You are among the top four in the world, which is something not a lot of people can achieve, and then you end up being excluded because of a premeditated plan,” said Tortosa, who made several attempts to have the federation’s decision reversed but couldn’t get a favorable ruling in time.

He said he believed he was left out of the Olympics because of his father’s opposition to the federation’s president in recent elections. He said his father was a former coach and was fired by the federation several years ago, later winning labor disputes against the local taekwondo body.

The federation said its decision was made based solely on sporting merits. It said its technical directors felt Tortosa’s replacement, Adrián Vicente, would give Spain a better chance of winning a medal in Tokyo. It denied accusations of any political bias.

“Comments implying that the decisions made by the federation’s technical directors were motivated by aspects other than the sport itself are inadmissible,” it said in a statement released after the case attracted widespread attention in Spain.

The 22-year-old Vicente is ranked outside the top 10 in the world in the 58-kilogram category. He was runner-up in this year’s European championships, but lost to Tortosa the last time the two met, in a competition in the United States last year.

Vicente, who is already in Tokyo preparing for his first Olympics, said he was not being affected by the controversy surrounding his name, nor by the insults he was subjected to on social media recently.

“I’m staying focused on my job,” he told the Spanish newspaper El País.

Russian fencer Alexey Cheremisinov, ranked No. 10 in the world and No. 1 in Russia in men’s foil, wasn’t picked in the four-man foil team, whose other athletes are ranked 23rd, 36th, 46th and 124th. Coach Ilgar Mamedov told RIA Novosti news agency last month that Cheremisinov had been doing the wrong type of training and neglecting his fitness, so younger fencers were selected.

English badminton men’s doubles team Chris Langridge and Marcus Ellis will not defend their bronze medal from the 2016 Rio de Janeiro Olympics after the federation chose Ben Lane and Sean Vendy even though they are ranked lower. Ellis still made the team to play in mixed doubles.

Two Japanese climbers initially not selected for the Japan team, Kai Harada and Miho Nonaka, eventually had their spots secured after a favorable ruling by CAS on the selection process of athletes. It was the Japanese sports climbing association itself that had gone to CAS against the athletes.

There are also cases of top-ranked athletes missing out on the Olympics in countries that use trials instead of world rankings to set their squads.

Kenya’s 1,500-meter world champion Timothy Cheruiyot, who set a world-leading time this year, was initially out of the Tokyo Games after finishing outside the top three in the Kenyan trials. He only made it to Japan after another athlete recently was dropped from the team because of doping issues.

Tortosa, who was fifth at the Rio Games as a 19-year-old, said he is considering changing nationalities to try to make sure he has a spot at the 2024 Paris Games.

“I’ll see what my options are,” he said. “Right now, I just want to go away and disconnect.”

AP Sports Writers James Ellingworth and Gerald Imray in Tokyo and Foster Niumata in London contributed to this report.