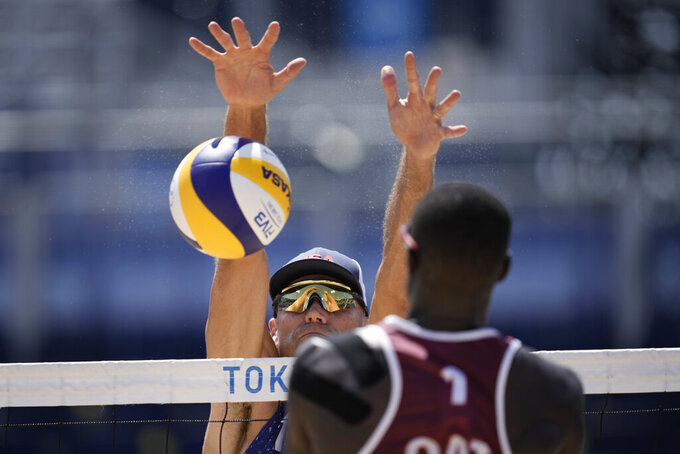 Philip Dalhausser, left, of the United States, trees to block the shot of Cherif Younousse, of Qatar, during a men's beach volleyball match at the 2020 Summer Olympics, Sunday, Aug. 1, 2021, in Tokyo, Japan. (AP Photo/Felipe Dana)

Americans Phil Dalhausser and Nick Lucena got knocked out of the Olympic beach volleyball tournament on Sunday by Cherif Samba and Ahmed Tijan of Qatar. If things had gone a little differently, it could have been Dalhausser and Lucena wearing the Qatari flag instead of the Stars and Stripes.

In 2005, when they were self-described knuckleheads working as substitute teachers in South Carolina, the Americans were offered airline tickets to Qatar and a chance to become citizens.

“A one-way ticket to Qatar,” Lucena said. “They wanted a young American team that didn’t play in the FIVB, an up-and-coming team. And we didn’t have a job or anything, so we were like, ‘We’ll do it.’

In fact, the two friends drove from South Carolina to the airport in Orlando, Florida, for their flight.

“We went to the desk and we’re like, ‘We have reservations.’ They’re like, ‘Oh, where’s your ticket?’” Dalhausser said. “I think they paid for the tickets, but it was back when you needed a paper ticket. So, they didn’t send the paper tickets.”

Dalhausser has a Swiss mother and German father and lived in Alaska before going to high school and college in Florida. But, like Lucena, he had never been to Qatar.

Olympic rules allow an athlete with multiple nationalities to pick a country. Since the two friends hadn’t yet played on the international tour, all they needed was Qatari passports to switch.

Things worked out OK for Dalhausser, though.

After playing with Lucena a bit on the AVP tour and internationally, he paired up with Todd Rogers and won the gold medal at the Beijing Olympics. After they failed to defend in London, Dalhausser decided to get back together with his old friend Nick.

Together, they qualified for the 2016 Games in Rio de Janeiro and made it back to the Olympics for a second time. After Sunday’s loss to a pair ranked No. 1 in the world, Dalhausser said he was finished playing internationally.