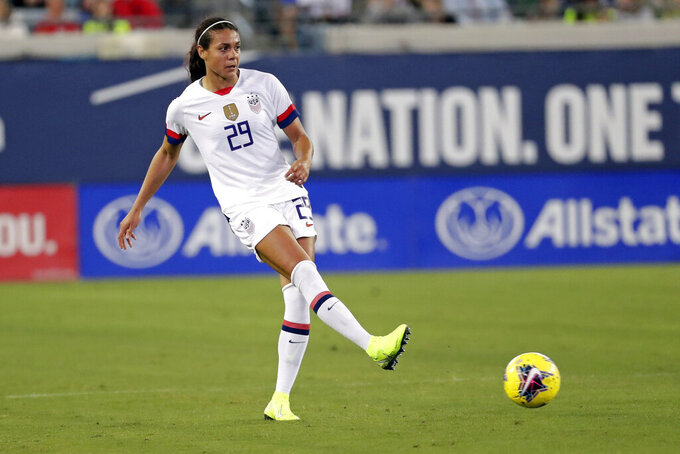 FILE - In this Sunday, Nov. 10, 2019 file photo, United States defender Alana Cook (29) passes the ball during the first half of an international friendly soccer match against Costa Rica, in Jacksonville, Fla. Cook joined an exclusive club when she nodded in a goal for Paris Saint-Germain against Barcelona on Sunday, April 25, 2021. Megan Rapinoe, Christen Press and Carli Lloyd are the only other American internationals to have scored at the semifinals or finals of the Women's Champions League. (AP Photo/John Raoux, File)

Alana Cook joined an exclusive club when she headed in a goal for Paris Saint-Germain against Barcelona last weekend.

Megan Rapinoe, Christen Press and Carli Lloyd are the only other United States internationals to have scored in the semifinals or final of the Women's Champions League.

To boot, it was the 24-year-old defender's first goal since turning professional just over two years ago.

“There have been some games where I’ve had some chances I probably should have put away but not too bad to do it in a semifinal of the Champions League,” Cook, who joined PSG from Stanford University, told The Associated Press in an interview.

Preventing goals — not scoring them — will be Cook's main focus when PSG travels to Barcelona for the second leg on Sunday, after a 1-1 draw in Paris. In the other semifinal, Bayern Munich visits Chelsea with a 2-1 advantage.

The natural center back is not a lock to start, but she'll be ready. They've studied video of how Barcelona forward Jenni Hermoso scored in the first leg by finding space in the defense to head in a cross. The Spaniard leads the competition with six goals.

“We had a few defensive breakdowns along the way — with most goals it’s not any one person,” Cook said. “We’ll just have to correct a few things. It will come back down to our defensive shape, probably some communication issues. If we just shore up a bit of that, the shape work, be more connected to each other, we can prevent stuff like that.”

Cook doesn't mind battling for her spot — she's doing that with the U.S. national team, as well. She's played in friendlies — leaving her still eligible for England, where her father was born — but hopes to be in the American squad for the Tokyo Olympics.

“Everyone in the U.S. pool right now, that’s what we’re all striving for,” she said.

United States coach Vlatko Andonovski called in the New Jersey native this month for a friendly against Sweden. It's a team loaded with World Cup-winning talent, but Cook is optimistic.

“Every spot is up for grabs if you were to ask Vlatko about it,” she said. “Right now, it’s just about competing as hard as I can for that.”

The long-term goal is to become a regular and then a starter. The dream, she added, is to be "a captain or a leader in the team, but now it’s just about competing for a place in the group.”

Cook debuted for the United States in November 2019, the call-up coming a month after she had trained with the Lionesses at the invitation of then-England national team coach Phil Neville.

“At this point, I am committed to playing for the U.S. — it’s where I see my future,” said Cook, who rose through the United States youth system.

Her sister represented Britain in softball, but Cook said there's no pressure from their English father.

“He was proud and excited either way,” she said.

Cook was seen as a likely first-round NWSL draft pick in January 2019 before she took the offer from PSG, where she's under contract for another two seasons.

“I would have been happy to go in the NWSL, but to be able to play here in Paris was an opportunity I couldn't pass up,” she said.

Cook hopes to play in the NWSL at some point, and with the growth of the Women's Super League “it would be really fun to play in England,” she said.

Her PSG tenure has included a short-term loan to OL Reign — an American team owned by PSG rival Lyon. That was last year for the NWSL Challenge Cup, arranged after the American season was canceled because of the coronavirus pandemic.

But her French squad was eager to keep her in Paris when it nixed a national team call-up in February for the SheBelieves Cup because she would have had to quarantine upon returning.

Catarina Macario, Cook's former teammate at Stanford, is another American who went straight to Europe, signing with powerhouse Lyon.

“There’s a lot of value in putting yourself out of your comfort zone," Cook said. "I came here knowing zero French, having to adjust to the culture, the European style of soccer. That’s been really great for my development, both on the field and off.”