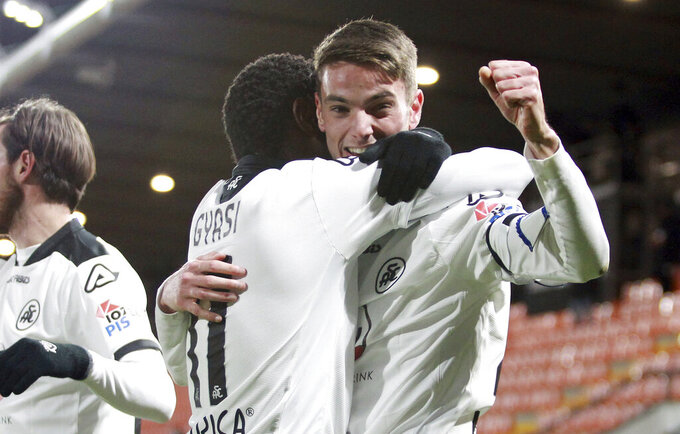 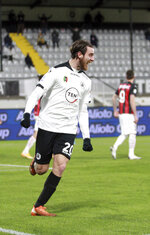 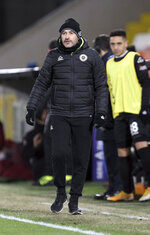 MILAN (AP) — AC Milan missed the chance to extend its lead in Serie A when it lost 2-0 at Spezia, which was playing its first match under new American owners on Saturday.

Giulio Maggiore and Simone Bastoni scored their first Serie A goals as Spezia dominated and stunned Milan in the second half.

When asked if it was the best match of his career, Spezia coach Vincenzo Italiano said, “Yes, no doubt. Also for that fact that it was against the league leader, a stratospheric side like Milan, and to have done so with this type of performance and managing to win."

Milan did not even have a shot on target. The Rossoneri remained two points clear of second-placed Inter Milan, which could leapfrog its city rival on Sunday with a win at home to Lazio.

Whatever the result, it will be first against second when Milan hosts Inter in the derby on Feb. 21.

“We have to react and we will certainly do so,” Milan coach Stefano Pioli said after his side’s third defeat of the season and its first away from home since December 2019. “This is the first defeat we really deserved because we gave much too little on the field.

“It was an awful night for me and for the team. I was right to leave the field with our heads down, no one spoke in the dressing room. But we will bounce back.”

Third-placed Juventus remained seven points behind Milan after losing at Napoli 1-0. The nine-time defending champion has played a match less than the Milan teams.

Spezia pulled itself nine points clear of the relegation zone. The seaside team, which is in its first ever season in Serie A, was bought by the Platek family on Thursday.

Milan was looking to take advantage of a tough weekend for its title rivals but Spezia started strongly and only a brilliant save from goalkeeper Gianluigi Donnarumma prevented Riccardo Saponara from giving the home side an early lead.

Spezia broke through in the 56th minute. Emmanuel Gyasi pulled the ball back for Kevin Agudelo who set up Nahuel Estevez. Donnarumma rushed out to meet him so he rolled across for Maggiore to tap into the empty net.

Spezia doubled its lead 11 minutes later after having penalty appeals waived away following a tackle by Diego Dalot on Saponara that was just outside the area. The resulting free kick was short to Bastoni, who hit a rocket into the far side of the net.

Insigne missed his previous three penalties against Juventus — including last month in a 2-0 loss in the Italian Super Cup — but he converted in the 31st minute following a handball by Juventus captain Giorgio Chiellini.

Napoli moved to fourth, above Roma and Lazio on goal difference. It was two points below Juventus.

It was the first league meeting between Napoli and Juventus this season. The October match in Turin was canceled due to coronavirus cases, and Napoli was issued a 3-0 default loss and docked a point. That was revoked on appeal but the match has yet to be rescheduled.

Torino drew a fifth successive match as it was held by Genoa to 0-0.

Genoa defender Davide Zappacosta almost scored against his old club but his effort came off the post.

Genoa is 10 points clear of danger after an impressive run since coach Davide Ballardini took charge in December.