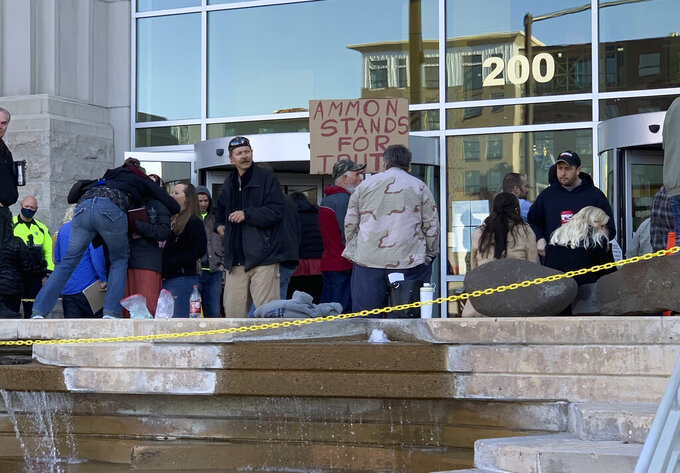 Roughly two dozen people gather to protest mask rules and other measures taken to slow the coronavirus pandemic and to show support for fellow protester and anti-government activist Ammon Bundy outside the Ada County Courthouse in Boise, Idaho, Monday, March 15, 2021. Bundy was scheduled to stand trial on charges that he trespassed and obstructed officers at the Idaho Statehouse during a special legislative session last fall, but Magistrate Judge David Manweiler issued a warrant for Bundy's arrest after Bundy failed to appear in the courtroom. Bundy was arrested late Monday morning on a misdemeanor charge of failing to appear in court. (AP Photo/Rebecca Boone)

BOISE, Idaho (AP) — Anti-government activist Ammon Bundy was arrested Monday after failing to attend his trial on charges that he trespassed during an Idaho legislative session last fall. Bundy didn't appear in the courtroom because he was protesting outside the building instead, apparently angry in part over mask requirements put in place during the coronavirus pandemic.

Bundy was joined by about two dozen other protesters on Monday morning, some holding signs with slogans like “Ammon stands for truth” and others yelling misinformation and conspiracy theories about the COVID-19 pandemic popularized by groups like QAnon.

The Idaho Supreme Court has ordered that everyone wear masks while inside state courtrooms in an effort to slow the spread of COVID-19. The Ada County Sheriff's office said both Bundy and another man expected to appear for a jury trial on trespassing charges, Aaron von Schmidt, refused to wear masks so they could enter the courthouse for their trials.

After the judge issued arrest warrants because the men failed to appear in court, a deputy asked both men if they would voluntarily turn themselves in. Both men refused, the Ada County sheriff's office wrote in a prepared statement released later that day.

When a team of deputies tried to make the arrests, the protesters resisted, the Ada County Sheriff's Office said. Deputies said Bundy laid down on the ground and refused to move, while other protesters reportedly locked arms to try to impede the deputies' approach. A third man, 69-year-old Casey J. Baker of Nampa, was ultimately arrested on suspicion of battering a law enforcement officer and a fourth man was issued a citation after deputies said he resisted and obstructed officers.

The sheriff's office said a fifth person who wasn't involved in the confrontation with deputies got caught up in the crowd and fell down, hitting his head on the ground. That person was taken to a hospital for treatment.

Bundy and followers of his “People's Rights” organization have frequently protested coronavirus-related measures in southwestern Idaho since the pandemic began, including the protests at the Statehouse last August that originally led to Bundy's arrest on trespassing charges.

In one of the August protests, angry unmasked protesters forced their way into a House gallery with limited seating, shattering a glass door in the process. The next day, more than 100 protesters shouted down and forced from the room lawmakers on a committee considering a bill to shield businesses and government agencies from coronavirus-related liability. Bundy was arrested for trespassing when he wouldn’t leave the room, and again the next day when he returned to the Statehouse despite a one-year ban.

Bundy is representing himself in his criminal case. Shortly after his August arrests, he told Judge David Manweiler that he doesn't believe his actions at the Idaho Statehouse were illegal, and he claims the state doesn't have legal standing to charge him with a crime.

He also filed subpoenas — legal orders to testify or turn over documents — to several bystanders and officials who were at the Idaho Statehouse during his arrests, including Associated Press reporter Keith Ridler, who photographed and reported on the incidents.

The AP asked Manweiler to reject the subpoena for Ridler's testimony and his reporting materials in part because the news agency said the subpoena would violate the “Idaho's Reporter's Privilege,” a legal balancing act that courts take to determine if a subpoena given to a member of the news media would chill their First Amendment rights.

Bundy didn't respond at all to the AP's motion.

On Monday, Manweiler said Bundy failed to show that the subpoena would have met the three prongs of the reporter's privilege test: that there is probable cause to believe the reporter had some information that was clearly relevant to a specific violation of the law, that the information can't be found in another way, and that there was a compelling and overriding interest in the information that would have justified potentially limiting Ridler's First Amendment rights.

“Subpoenas to members of the media are particularly onerous because they threaten to intrude into the newsgathering process," the AP's attorneys wrote in their motion to the court. “Being forced to testify or produce evidence in a court case also threatens the independence of a free press and potentially puts journalists at personal risk. It risks causing Ridler to be viewed as aligned with one party or the other, potentially impacting how the public will perceive the independence of his reporting, and could even make him a target the next time he covers a public event.”

As of Monday evening, Bundy and Schmidt remained in jail, both being held in lieu of $10,000 bonds. Baker, who was arrested on suspicion of battering a law enforcement officer, was being held without bail according to jail records.

Bundy garnered international attention when in 2016 he led a group of armed activists in the occupation of the Malheur National Wildlife Refuge to protest the federal control of public lands. He and others were ultimately arrested, ending the 41-day occupation. But Bundy was acquitted of all federal charges in that case by an Oregon jury.

In 2014, Bundy, several brothers and his father led an armed standoff in Nevada with Bureau of Land Management agents who attempted to confiscate his father’s cattle for grazing on public land without a permit. He spent almost two years in federal custody before the judge later declared a mistrial.