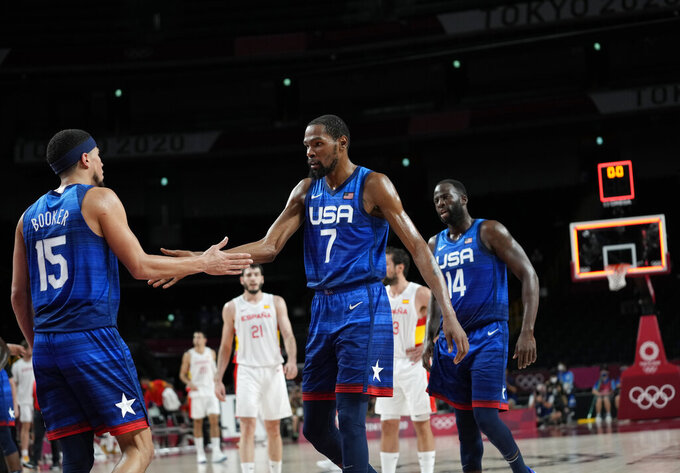 There are other factors involved in why the Americans — whose summer got off to a seriously shaky start — have won three consecutive games to reach the medal round at the Tokyo Olympics. The roster is full now. The NBA Finals trio of Jrue Holiday, Devin Booker and Khris Middleton got here and got settled. The team has been able to practice together. All of that has been crucial.

That all said, Durant is the key to everything.

He’s rolling right now: 18 for 28 in his last two games, 8 for 14 from 3-point range in those contests, 52 points in 59 minutes against first the Czech Republic and then Tuesday’s win-or-go-home game against longtime U.S. nemesis Spain.

And the two-time Olympic gold medalist — seeking to join Carmelo Anthony as the only American men with three Olympic titles — might have to stay in this groove if the U.S. is going to beat Australia on Thursday, then either France or Slovenia on Saturday for a medal.

“In these games, every team has people like that that they depend on to come through,” U.S. coach Gregg Popovich said after the quarterfinals victory over Spain. “And he certainly did.”

The U.S.-Spain game was tied at halftime, and then Durant decided it was over. A 3-pointer got the second half started. Another, not long afterward, gave the U.S. some breathing room and had Durant vigorously clapping his hands as he headed back down the floor. He had the assist that set up a 3-pointer from Jayson Tatum for a 15-point lead midway through the fourth, and then Durant closed out the win with a blocked shot and dunk in the final seconds.

To paraphrase his famous quote from 2019, he’s Kevin Durant. You know who he is.

And now, you’re starting to see what this U.S. team is.

“Guys are still growing,” Durant said. “I feel like we’re still getting better. That’s important, especially around this time.”

There are some big-time scorers on this U.S. team: Damian Lillard, Zach LaVine, Tatum, Booker, Middleton and Durant have all had at least one 50-point game in the last three seasons. This is not a new concept in the era where NBA players have gone to the Olympics; every U.S. roster has been loaded.

Durant has played on teams with more talent than this one. Take the 2012 London Olympics roster for example: That team had Anthony, LeBron James, Kobe Bryant, Chris Paul, Russell Westbrook — but the leading scorer was Durant, who dropped 30 points in a tight gold-medal win over Spain.

In 2016, he had 30 in the gold medal game once again, this time a win over Serbia. Biggest games, biggest stakes, those are the ones where Durant has a history of putting up his biggest numbers for the U.S.

That energy is building, and Durant is seeing the ball go through the rim plenty right now. Along the way, they might have figured out the roles as well. Just about every player on the U.S. roster is the best player on his NBA team, the go-to guy, and on this roster that won’t be the case. Durant has spoken multiple times this summer about almost having a deference to his U.S. teammates.

“Our chemistry has been great since Day 1,” Durant said. “We’re all excited to be here, I mean this is the Olympics, this is the national team, but I think we were a bit too unselfish early on and tried not to step on toes.”

That doesn’t seem to be an issue anymore. It was win-or-go-home on Tuesday and Durant took over. He’s no longer worried about stepping on his teammates’ toes.

He’s only trying now to make sure they all get gold medals around their necks.