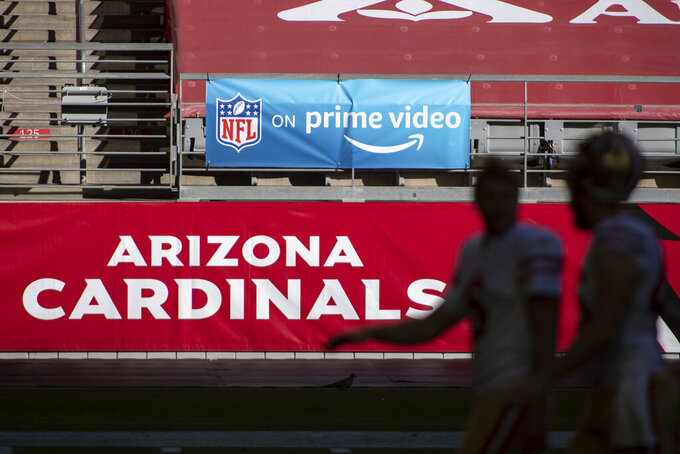 FILE - In this Saturday, Dec. 26, 2020, file photo, An 'NFL on prime video' banner hangs on the field prior to an NFL football game between the San Francisco 49ers and Arizona Cardinals in Glendale, Ariz. The NFL will nearly double its media revenue to more than $10 billion a season with new rights agreements announced Thursday, March 18, 2021 including a deal with Amazon Prime Video that gives the streaming service exclusive rights to “Thursday Night Football” beginning in 2022.(AP Photo/Jennifer Stewart, File)

The billions of dollars the NFL will be getting from broadcast partners over the next dozen years might seem like Monopoly money to fans.

Then again, without that lifeblood, the NFL likely wouldn’t dominate as America’s most popular sport.

Yes, the numbers are staggering, almost as if ABC/ESPN, NBC, CBS, Fox and Amazon were saying to the league: “We'll buy Boardwalk, Park Place — and everything else on the board.”

Even more staggering to think everyone involved has had to deal with financial difficulties during the coronavirus pandemic.

Yet the NFL negotiated 11-season deals — the league has an opt out after seven years — that will bring in $113 billion beginning in 2023. The contracts include a streaming service receiving pretty much equal treatment as Amazon Prime Video will be the home of “Thursday Night Football.”

“The NFL was able to include the digital and streaming components of each of the broadcast companies so they can build on that while still maintaining the traditional arrangements of over-the-air TV,” says Marc Ganis, co-founder of Chicago-based consulting group Sportscorp and a confidant of many NFL owners. "It's a brilliant strategy. It serves the needs of the broadcast companies and their parent companies as they put more money and emphasis on streaming for the younger audiences.

“With these agreements, the NFL has found the balance between linear cable and streaming that the other sports need to find.”

These contracts, which nearly double the yearly incoming broadcast revenues, were five years in the making.

NFL Commissioner Roger Goodell, along with Patriots owner Robert Kraft, chairman of the league’s media committee, and Brian Rolapp, the league's chief media and business officer, developed a strategy after striking a deal with Yahoo! to stream some games.

It really was a test of that marketplace, and the information gathered over a half-decade prepared the NFL for the 2021 culmination of the rights fee contract.

The Thursday night package became a testing ground that led to the Amazon package. Amazon hardly was the only bidder for that package, and the NFL could have stayed with an over-the-air partner such as Fox, which currently has Thursday night games, or turned to a cable entity.

But streaming was too enticing an option.

“Over the last five years we have started the migration to streaming. This is another large step in this direction,” Kraft explains. “Our fans want this option and understand streaming is the future. We have created a unique hybrid of viewing options and streaming. This should provide a smooth transition to the future of content distribution.”

Ah, the future. Who knows what's ahead as new media develop and expand? History tells us the NFL is likely to figure it out, as it did when it embraced cable TV, then helped launch Fox, then brought an out-of-market package of Sunday afternoon matchups to satellite's DirecTV, then made every every contest available on satellite's SiriusXM Radio.

The major step today clearly is streaming, with all of the broadcast partners including such services in their NFL programming.

“The pandemic has had a meaningful impact on a lot of things,” Ganis notes, "and one of them is the meteoric rise of streaming. I expect we would have seen these same deals had we not had the pandemic, but maybe not as much emphasis by the parent companies for all the streaming rights they were able to get.

“The broadcasters and their companies are now able to apply a significant part of their rights fees to their streaming services.”

What does all of this mean for Cheeseheads, Who Dats and Raider Nation, plus 29 other fan bases?

For one, more options for viewing. For another, better matchups in prime time with ESPN getting flexing capability late in the schedule.

When the NFL goes to the 17-game regular season — almost certainly for 2021 — the Super Bowl will be pushed back a week in February. That will bring it on to Presidents Weekend in some years.

But there's also a feeling of comfort emanating from these contracts.

“There are multiple takeaways from these deals,” Ganis says. “One of them, to paraphrase Mark Twain, is that the death of linear TV is greatly exaggerated. Having the Sunday package on regular TV over the air, and cable also as the base of the deal, even though it may be a mature and declining business, it is still a massive one.

“The NFL after years of experimenting found a balance that works for all the parties in 2021.”