Another tournament in Hawaii, a fresh start for most players 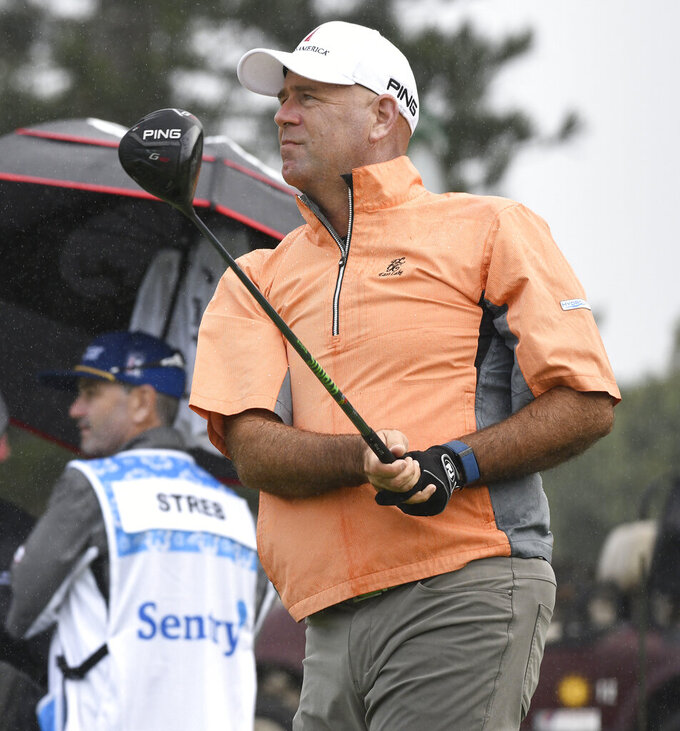 Stewart Cink watches his shot from the first tee during the first round of the Tournament of Champions golf event Thursday, Jan. 7, 2021, at Kapalua Plantation Course in Kapalua, Hawaii. (Matthew Thayer/The Maui News via AP)

HONOLULU (AP) — For the 31 players at the Sony Open who took the 30-minute flight over from Maui, the decision to play was easy. They're already in Hawaii, guaranteed a tropical climate and the course at sea level is an easy walk.

Collin Morikawa wouldn't know it any other way.

In the two years since he left Cal and turned pro, he has won each year on the PGA Tour and been eligible for the Tournament of Champions to start the new year. Plus, his family has history in Hawaii.

Would the PGA champion fly out to the middle of the Pacific Ocean for just one week?

“It's a great hypothetical,” Morikawa said with a smile. “But Hawaii is special to me. I would love to come out here starting the year. It has obviously the right kind of vibes. It gets you going to start the year. And I love it out here.”

His year didn't start too badly, except for one round. With consecutive rounds of 65, he went into the final round at Kapalua one shot out of the lead and shot a 73.

For the other 113 players at Waialae, the long trip was worth their while. That includes Charles Howell III, who is making his 20th consecutive start at the Sony Open and has never left the islands without money in the bank. Along with never missing the cut, Howell has seven finishes in the top 5, but still no victory.

“This tournament has obviously been really good to me,” Howell said. “It's an event that, Lord willing, I'll never miss as long as I can play. There's been a couple that I've kind of messed up there at the end or could have played a bit better to maybe have won, but it's been such a great event to me.”

In some respects, that surprises him. For those who didn't qualify to start the year at Kapalua, this their first competition in nearly two months. Even coming off a year that stretched into December because of the COVID-19 pandemic, the last tournament many played was just over a month ago.

“I'm more impressed that I've had as many top-10 finishes as I've had, simply because it is the first event back after a break,” Howell said. “And you don't always know how your game is.”

Cameron Smith won last year, ending a streak of six consecutive Sony Open winners who started at Kapalua. The advantage would seem to be with those who already have one tournament on the ledger this year, although the numbers against a 144-man field are against them. There were only 42 players at Kapalua last week.

For the Sony Open, the field is a drop from previous year.

The Tournament of Champions had its strongest field last week since the world ranking began in 1986 with eight of the top 10 players. Of those eight, only two came over to Waialae — Morikawa and Webb Simpson.

Dustin Johnson has a busy stretch in February that includes back-to-back weeks in Saudi Arabia and Pebble Beach. Jon Rahm is playing just about every week the rest of the way on the West Coast Swing. Justin Thomas is headed to Abu Dhabi next week, a long trip even without starting in Hawaii.

This is a different year with the pandemic, with no fans and not a great presence from tournament sponsor Sony. Criticism of just about anything in golf is hard to find when the PGA Tour has managed to play every week — except for three weeks in late December — without interruption since it resumed in June.

No matter who's playing, winning doesn't come easily these days.

Harris English finally broke through last week at Kapalua with a birdie on the 18th hole to force a playoff and another birdie on the 18th to beat Joaquin Niemann. It was his first victory in just over seven years and English has company. Throw out the majors, and five of the 11 winners had gone at least six years without a trophy.

English was No. 29 in the world when he won, a testament to his strong play. The other four — Stewart Cink, Martin Laird, Brian Gay and Robert Streb — were all outside the top 300.

It can happen any week, and the next shot is in paradise. Morikawa believes scoring is so good that players cannot afford to let off the gas. That was true last week on Maui, he expects the same on Oahu.

For tournaments in the same state, the Plantation Course at Kapalua and Waialae along the shores just down the way from Waikiki Beach could not be any different. Morikawa doesn't have a favorite except in one aspect.

“I enjoy walking Sony, I'll tell you that,” he said.