Another trophy for Dustin Johnson, this one without the cash 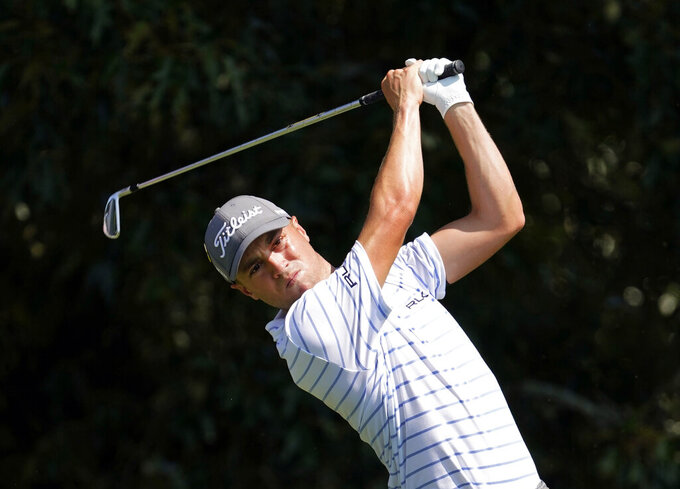 FILE - In this Sept. 6, 2020, file photo, Justin Thomas hits from the tee on the third hole during the third round of play in the Tour Championship golf tournament at East Lake Golf Club in Atlanta. Thomas is a leading contender for the U.S. Open, which starts Sept. 17, 2020, at Winged Foot Golf Club in Mamaroneck, N.Y. (AP Photo/John Bazemore, File)

MAMARONECK, N.Y. (AP) — Another week, another big trophy for Dustin Johnson, this one without any cash.

One week after he captured the FedEx Cup and its $15 million prize, Johnson was voted PGA Tour player of the year for the second time in the last five years. He also won the Jack Nicklaus Award, which comes with a bronze of Nicklaus famously raising his putter, in 2016.

Johnson joins Tiger Woods, Rory McIlroy, Nick Price and Fred Couples as the only players to win the award multiple times since it began in 1990.

Johnson was on the ballot with Justin Thomas, Jon Rahm, PGA champion Collin Morikawa and Webb Simpson. The tour historically does not release the tally of players who voted. It was the second straight year the award went to someone who did not win a major during the season. In this year of the COVID-19 pandemic, there was only one major.

The PGA Tour has not had a repeat winner of the Jack Nicklaus Award since Tiger Woods in 2007.

Thomas won the PGA of America’s award that is based on points — 10 for every PGA Tour victory, along with up to 20 points depending on where the player finished on money list and the Vardon Trophy for lowest scoring average.

Thomas won three times. Johnson won three times including the Tour Championship, which did not count for the PGA of America because Johnson started with a two-shot lead. Xander Schauffele had the lowest score at the Tour Championship, though he played the final round trying to make up a five-shot deficit, while Johnson played the final four holes trying to protect a two-shot lead.

Scottie Scheffler won the Arnold Palmer Award as rookie of the year on a ballot that included Viktor Hovland, Harry Higgs and Maverick McNealy. Hovland was the only other viable candidate from winning the Puerto Rico Open. Scheffler didn’t win, but he had seven top 10s, including a tie for fourth in the PGA Championship, and he finished No. 5 in the FedEx Cup.

The PGA Tour no longer gives an award for leading the money list — that used to be called the Arnold Palmer Award. Thomas led the money list for the third time in the last four years.

ASIA OUT FOR LPGA

For the first time in 45 years, the LPGA Tour will not be going to Asia this year.

The tour lost three tournaments from its Asia swing in late February and early March at the onset of the COVID-19 pandemic. On Tuesday, the LPGA said two more tournaments scheduled for October in South Korea and Japan were canceled for 2020 and will return next year. Two other events in China and Taiwan that were part of the fall swing previously were canceled because of travel restrictions and quarantine requirements.

The LPGA first started playing in Asia with the Mizuno Classic in Japan in 1976.

The LPGA Tour added a one-time event called the LPGA Drive On Championship-Reynolds Lake Oconee. That will be Oct. 22-25 in Greensboro, Georgia, for a purse of $1.3 million.

The LPGA also had a “Drive On” tournament at Inverness to mark its return to golf on July 31.

“Since we unfortunately cannot travel to Asia, we felt it was very important to add another competitive opportunity for our players," Commissioner Mike Whan said.

Losing the Asia swing creates some time off for the LPGA that leads to a big finish. After the KPMG Women's PGA at Aronimink from Oct. 8-11, there will be a week off before the new Drive On tournament, and then three weeks off before an event in the Tampa Bay area in Florida.

After Thanksgiving, the LPGA finishes with a tournament in the Dallas area, the U.S. Women's Open in Houston and the season-ending CME Group Tour Championship in Naples, Florida.

Even so, the cost of the pandemic is evident in opportunities. The LPGA Tour went into 2020 with a 34-tournament schedule. It will end the year with 17 tournaments.

Collin Morikawa has a chance to join one of the smallest lists in major championship history.

Morikawa won the PGA Championship last month at Harding Park. Next up is Winged Foot for the U.S. Open.

“Walking here as a major champion, you have a sense of knowing how to get things done,” Morikawa said. “Yes, I’ve only done it once, but I’ve done it. You just want more. You get that little taste of what it’s like, and you know why guys mark in their calendars the major championships for the year.”

FATHERS AND SONS AND DAUGHTERS

A tournament that began with fathers and sons playing together is getting a new name to reflect a field that also includes daughters and even grandchildren.

The PNC Father Son Challenge, which began in 1995, this year becomes the PNC Championship, which includes a sponsorship renewal by PNC Bank. It will be played Dec. 18-20 in Orlando, Florida.

The field is for major champions or winners of The Players Championships and their partners. Annika Sorenstam played last year with her father. Fuzzy Zoeller once played with his daughter. Jack Nicklaus often plays with his grandson. Bernhard Langer has played with two sons and two daughters. Langer won last year with his son, Jason.

“We started the PNC Father Son Challenge to showcase the family bond that golf cultivates and also to give the icons of our game an opportunity to share their success with the ones they love,” said Alastair Johnston, vice chairman of golf at IMG. “As the PNC Championship, we feel the name reflects the field composition and the event’s stature as we look forward to welcoming familiar faces, new talent and different family partnerships to this unique event.”

Justin Thomas has his regular caddie back at work for the U.S. Open. Jimmy Johnson took time off in July to get blood pressure medication sorted out. Jim “Bones” Mackay, who previously worked for Phil Mickelson, had been filling in. ... The USGA went heavy on colleges for the U.S. Open tee times, with a threesome from Arizona State (Mickelson, Jon Rahm, Paul Casey), from Oklahoma State (Viktor Hovland, Rickie Fowler and Matthew Wolff) and from Georgia (Brendon Todd, Harris English and amateur Davis Thompson). It also put together three Canadians in Mackenzie Hughes, Adam Hadwin and Corey Conners. ... Tiger Woods has won all three of his U.S. Opens on public-access golf courses — Pebble Beach, Bethpage Black and Torrey Pines. Winged Foot is a private club.

Tiger Woods, Phil Mickelson and Steve Stricker are the only players at this U.S. Open who were at Winged Foot for the 2006 U.S. Open and the 1997 PGA Championship. Mickelson is the only one to make the cut in both.