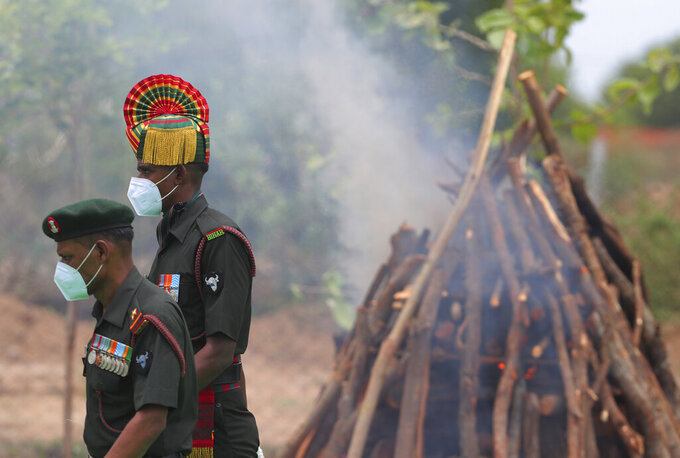 FILE- In this June 18, 2020 file photo, Indian army officers walk past the pyre of their colleague Colonel B. Santosh Babu, who was killed during a clash with Chinese soldiers in Ladakh region, during his funeral at Suryapet, about 140 kilometers (87.5 miles) from Hyderabad, India. Tensions along the disputed India-China border seem to be getting worse rather than better, three months after their deadliest confrontation in decades in June. The Asian giants accused each other this week of sending soldiers into each other’s territory and fired warning shots for the first time in 45 years, raising the specter of full-scale military conflict. (AP Photo/Mahesh Kumar A, File)

SRINAGAR, India (AP) — Tensions along the disputed India-China border seem to be getting worse, three months after their deadliest confrontation in decades.

The Asian giants accused each other this week of sending soldiers into the other’s territory and fired warning shots for the first time in 45 years, raising the specter of full-scale military conflict.

Their foreign ministers are expected to discuss the simmering dispute in Moscow on Thursday on the sidelines of a regional security and economic meeting.

The high-altitude standoff along the eastern section of what's known as the Line of Actual Control — a loose demarcation — risks dramatically altering the already fraught relationship between the nuclear-armed neighbors.

The face-off began in early May with a fierce brawl before exploding into hand-to-hand combat with clubs, stones and fists on June 15 that left 20 Indian soldiers dead. China is believed to have taken casualties, but has given no numbers.

India and China inherited their territorial disputes from the period of British colonial rule.

Three years after India’s independence in 1947 and a year after the communists came to power in China, the new government in Beijing began strongly asserting its claims and repudiating earlier treaties it says were signed under duress, but which India says are fixed.

Beijing's approach has strengthened under Xi Jinping, China’s most powerful leader in decades who has sworn not to surrender even an inch of territory.

In the 1950s, China started building a strategic road on the uninhabited Aksai Chin Plateau to connect its restive regions of Tibet and Xinjiang. India objected and claimed Aksai Chin as part of Ladakh, itself belonging to the former principality of Kashmir now divided between India and Pakistan.

Relations were further strained after India allowed Tibet's spiritual leader, the Dalai Lama, to establish a self-declared government-in-exile in the northern Indian town of Dharmsala after he fled his homeland in 1959 during an abortive uprising against Chinese rule.

The differences led to a bitter monthlong war in 1962. Firefights broke out again in 1967 and 1975, leading to more deaths on both sides. They’ve since adopted protocols, including an agreement not to use firearms, but those protocols have fractured in this year's clashes.

China, in the meantime, began cementing its relations with India’s archrival Pakistan and backing it on the issue of Kashmir.

THE LINE OF ACTUAL CONTROL

The fiercely contested LAC separates Chinese and Indian held territories from Ladakh in the west to India’s eastern state of Arunachal Pradesh, which China claims in its entirety. It is broken in parts where the Himalayan nations of Nepal and Bhutan border China.

According to India, the de facto border is 3,488 kilometers (2,167-mile) long, although China promotes a considerably shorter figure. As its name suggests, it divides the areas of physical control rather than territorial claims.

In all, China claims some 90,000 square kilometers (35,000 square miles) of territory in India’s northeast, including Arunachal Pradesh with its mainly Buddhist population.

India says China occupies 38,000 square kilometers (15,000 square miles) of its territory in the Aksai Chin Plateau, which India considers part of Ladakh, where the current face-off is happening.

Despite more than three dozen rounds of talks over the years, and multiple meetings between Indian Prime Minister Narendra Modi and Chinese President Xi Jinping, they are nowhere near settling their dispute.

Since the 1962 war, both economies have grown substantially, but China has far outpaced India while enjoying a large trade surplus with its neighbor.

The growing economic rivalry has added to territorial and geostrategic differences. India has tried to capitalize on China’s rising labor costs, and deteriorating ties with the United States and Europe, to become a new base for foreign manufacturers.

Meanwhile, India’s growing strategic alliance with the U.S. has ruffled feathers in Beijing, which sees the relationship as a counterweight against China’s rise. Indian fears of Chinese territorial expansion are bolstered by the growing presence of the Chinese navy in the Indian Ocean and Beijing’s efforts to strengthen ties with not only Pakistan but also Sri Lanka and Nepal.

India is jockeying for strategic parity with China, massively ramping up its military infrastructure along the LAC.

Adding to the tension, India unilaterally declared Ladakh a federal territory and separated it from disputed Kashmir in August 2019, ending its semi-autonomous status.

Border tensions have persisted despite talks at military, diplomatic and political levels. With strong nationalists leading both countries, the border has taken on a prominence not seen in years.

Having emerged relatively unscathed from the COVID-19 pandemic, China is also perceived regionally as ramping up military ambitions against its neighbors, particularly through the use of “salami slicing” tactics to incrementally gain territory.

While Chinese soldiers remain in what India says is its territory in Ladakh, India occupied at least one unmanned mountain top last week, leading Beijing to furiously demand that New Delhi vacate the area.

Experts warn that if military hostilities are not stopped, war could be next.

“If diplomacy fails, guns talk. That is the natural culmination of what we have been witnessing during last four months,” said Lt. Gen. D.S. Hooda, who was head of the Indian military’s Northern Command from 2014 to 2016. “Things are fast escalating out of control unless there is a breakthrough in talks.”

Wang Lian of Peking University’s international relations department considers the possibility of a wider conflict less likely, despite preparations being made on both sides.

“China has shown restraint in bilateral relations with India, and India may restrain itself from overdoing it in the future,” Wang said.