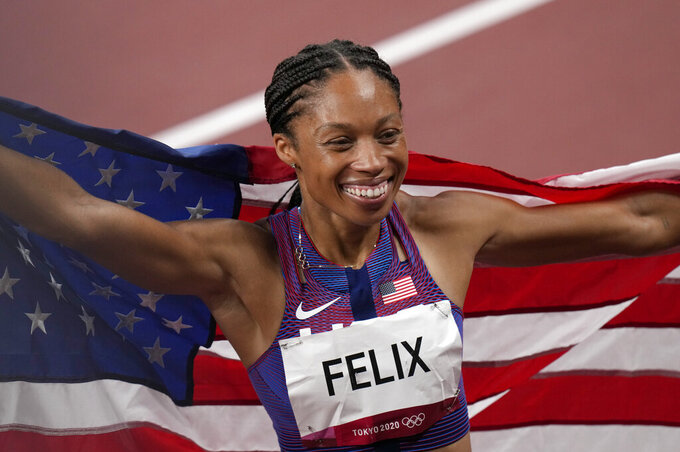 FILE - Allyson Felix, of United States smiles after taking the bronze, in the final of women's 400-meters at the 2020 Summer Olympics, Friday, Aug. 6, 2021, in Tokyo, Japan. As the most decorated female track athlete in the history of the Olympics, hardly a day goes by when Allyson Felix isn’t reminded of her long list of accomplishments. Introduce her by mentioning that huge haul of 11 Olympic medals and the 18 pieces of gold (mostly), silver and bronze hardware that make her the most decorated competitor -- male or female -- in the history of the athletics world championships, and she’s hardly phased. (AP Photo/Francisco Seco, File)

ROME (AP) — As the most decorated female track athlete in the history of the Olympics, hardly a day goes by when Allyson Felix isn’t reminded of her long list of accomplishments.

Introduce her by mentioning that huge haul of 11 Olympic medals and the 18 pieces of gold (mostly), silver and bronze that make her the most decorated competitor — male or female — in the history of the athletics world championships, and she’s hardly fazed.

Add in her one world indoors title to make for a nice, round total of 30 career medals after two decades at the top of her sport, and she still won’t even blink.

But let a fellow competitor describe the impact that the American 200- and 400-meter runner has had on both track and field and advocacy for female athletes, and that gets Felix’s attention.

“She’s been an absolute legend,” British world champion Dina Asher-Smith said at a news conference ahead of Thursday’s Golden Gala Pietro Mennea, which will mark the final Diamond League meet of the 36-year-old Felix’s career.

With Felix sitting two seats over from her, Asher-Smith — who is a decade younger than Felix — went on to describe the American’s “grace” and “dignity” and the effect of seeing Felix up close when she was a youth volunteer collecting athletes' discarded warmup suits off the track at the 2012 London Olympics when Felix won three golds.

“I’ve been a big fan for years and years and years,” Asher-Smith said. “The first time I raced Allyson in 2015 I remember thinking, ‘I’m a professional athlete now because I’m in a race with Allyson.’”

Asked later about Asher-Smith’s comments, Felix told The Associated Press that they made her “feel ancient.”

“But Dina is so sweet. I feel just humbled listening to that,” Felix added. “And I remember when I was in that position. And it doesn’t seem like it’s been that long, but it has. And it’s just really special to hear words like that. And now I know that the sport is in really great hands, so I’m excited to watch them continue to just take it to new levels.”

Felix, who announced in April that this will be her final season, is enjoying one final tour through Europe before she gets down to her last major meets — the U.S. trials later this month then (if she qualifies) the world championships in July.

“It’s something that you hope that can help the sport and that people can pay attention to and realize this incredible thing that happens between the Olympic Games,” Felix said. “So I really hope that people will take advantage of the opportunity to come out and to watch.”

Felix isn’t yet sure which event(s) she’ll attempt to qualify for at trials. But she said she’d be happy just to race a mixed gender relay if that’s what it comes down to.

“I don’t necessarily even need one race, honestly,” Felix said. “I’ve tried not to make that the focus of my year but obviously a mixed relay would be really fun. I’m just trying to get to top form to just be able to help if the team needs me.”

In the meantime, Felix will be facing stiff competition in the 200 at the Stadio Olimpico.

Besides Asher-Smith, also entered are Elaine Thompson-Herah, the Jamaican who has swept the 100 and 200 titles at the past two Olympics, and Shaunae Miller-Uibo of the Bahamas, who has won the 400 at two straight Olympics.

As accomplished as Thompson-Herah and Miller-Uibo are, Felix remains on another level for Asher-Smith — in part because of her advocacy for women's rights. When Felix’s daughter, Camryn, was born in 2018, Felix cut ties with Nike because she was upset with the way the company treated pregnant athletes.

It ultimately led to change: Nike later announced it planned to alter contracts so female athletes weren’t penalized for childbirth.

“She’s done so much for us, so much for our sport,” Asher-Smith said. “A lot of us have her to thank for that.”

Felix will continue her fight in retirement.

“I feel like track has really led me to that purpose,” she said. “So just because I’m finishing my career on the track, it’s not finishing (those battles). I’m going to push for equality on all fronts.”