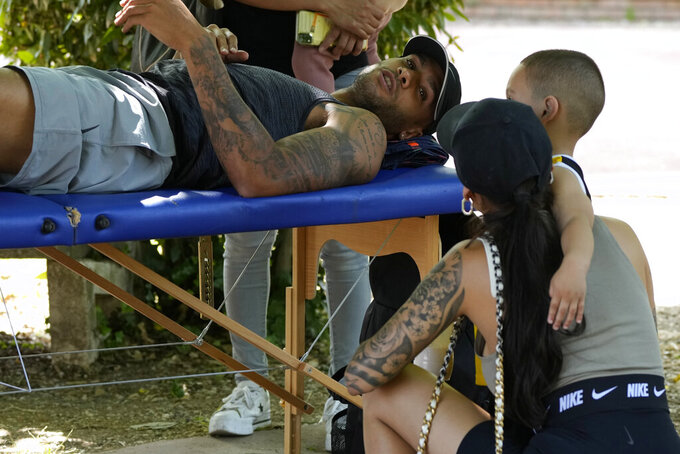 Olympic champion Marcell Jacobs talks with his fiancee Nicole Daza and his son Antony as he receives a massage at a training center in Rome, Monday, May 23, 2022. This year could be more memorable for Jacobs than his breakout 2021 when he sprinted from virtual unknown to Olympic 100-meter champion then added another surprising gold at the Tokyo Games with Italy's 4x100-meter relay team. Jacobs tells The Associated Press that "winning these next two big events would mean winning everything there is to win in athletics."(AP Photo/Alessandra Tarantino)

ROME (AP) — Marcell Jacobs already won another gold medal at the world indoors. He'll likely get a huge reception at Rome’s upcoming Diamond League meet. Then a reunion with his once-estranged father at the world championships. Followed by more potential medals at the European championships.

And, to top it all off, a wedding in September.

If last year — when Jacobs sprinted from virtual unknown to Olympic 100-meter champion and then added another surprising gold at the Tokyo Games with Italy’s 4x100-meter relay team — proved remarkable for the Texas-born runner, 2022 could be even more memorable.

For all those who thought Jacobs was just a one-hit wonder — and there were plenty of naysayers — the Italian has other plans.

“Winning these next two big events would mean winning everything there is to win in athletics,” Jacobs told The Associated Press in an interview at his Rome training base this week. “But I’ve got a huge target on my back wherever I go now — everyone wants to beat me. So it’s all very complicated.”

What’s perhaps even more complicated is Jacobs’ relationship with his dad, Lamont.

Born in El Paso to an American father and an Italian mother, Jacobs moved to Italy when he was 6 months old after his parents split. He didn’t see his dad again until a meeting was arranged in Orlando, Florida, when Jacobs was 13.

In his newly published autobiography, “Flash: La mia storia (My story)” Jacobs looks back fondly on that 2008 meeting.

“Everything was great, idyllic, but unfortunately it ended there,” Jacobs wrote. “I never heard from him anymore and I didn’t see him again.

“When I got back to Italy, at the most he would send me messages. That’s when I put up a wall between us. … I asked myself why I didn’t have a dad like everyone else. Even now, if you ask me what my father is like, I don’t really know how to answer.”

Two years ago, on the advice of his mental coach, Jacobs renewed his relationship with his father — who was stationed with the U.S. military in Italy when he met Jacobs’ mother — and they exchanged messages before the 100-meter final in Tokyo.

“He told me, ‘Remember what matters is all that you’ve done to reach this point, so don’t be afraid of anybody and run as fast as you can,’” Jacobs said.

In July at the world championships in Eugene, Oregon — which will mark the first time that the biggest event in track and field outside of the Olympics will be held in the United States — Jacobs’ father is planning to watch his son compete in person for the first time.

“It will be really emotional and will be give me extra energy,” Jacobs said.

Not that Jacobs has been lacking energy lately.

In March, the muscular Italian beat American standout Christian Coleman in a photo finish to become the first reigning Olympic 100-meter champion to claim the world indoor 60-meter title. The victory was all the more impressive considering that the 60 isn’t really suited to Jacobs’ strengths — he’s a slow starter and tends to accelerate gradually.

Coleman would have been a favorite for gold at the Olympics had he not been banned from the Tokyo Games for missing three anti-doping tests in a year.

Coleman’s absence, the retirement of Usain Bolt, and the fact that the world leader in 2021, Trayvon Bromell, didn’t make it out of the semifinals, made Jacobs’ Olympic title seem underwhelming to many.

Add in that Jacobs had never broken the 10-second barrier before last year and there were also plenty of insinuating questions about his 9.80-second victory.

Jacobs, however, has never failed a doping test.

“I always put down 6 a.m. for my availability because that way I know I’ll be in bed and I’ll want to go pee as soon as I get up,” he said. “So it can be all done in 10 minutes. When I was in Tokyo I was tested eight times over two weeks. Then since Tokyo they come every two weeks. I was tested at every indoor race this season. I’ve never missed a test and I’ve always tried to handle it the best way possible.”

At 27, Jacobs attributes his rapid development on the track to his late switch from long jumping and frequent knee injuries that curtailed him earlier in his career.

“The (questions) had more of negative impact on the people close to Marcell than they did on him,” said Paolo Camossi, Jacobs’ coach and himself a former jumper who is also still learning about elite sprinting. “We know the history. We know how many times he scraped his knees because of all the falls we had, how many tears we had to dry.”

Some of the most pointed criticism of Jacobs’ Olympic golds came from London’s tabloids, which then had to report how Britain’s 4x100 team was stripped of the silver medal it won behind Jacobs’ Italy because of a doping violation involving C.J. Ujah.

“When you want to hurt someone it comes back to bite you,” Jacobs said.

Jacobs received another major snub in October when he wasn’t even named among the 10 nominees for male athlete of the year by World Athletics — even though he was the only man to win two golds on the Tokyo track.

“I’ll work even harder so that (this) year they’ll have to nominate me,” Jacobs said.

However, Jacobs is having a slow start to his outdoor season, having had to sit out a meet in Kenya because of a stomach issue and then withdrawing from this weekend’s Diamond League meet in Eugene because of a strained muscle.

In his only 100-meter race since the Olympics at a meet in Savona last week, Jacobs won his semifinal heat in 9.99 seconds but didn’t seem his usual, powerful self in the final, despite finishing first in 10.04.

Jacobs lost 2 kilograms (4½ pounds) of weight from the virus he had in Kenya. Add that to the weight he had already shed under a new training regime, and Jacobs’ body is still adapting to it its new lightness.

“My idea is that a sprinter should be like a gazelle or a jaguar rather than a rhinoceros,” Camossi said. “But losing 2 kilos when he was already thin wasn’t ideal.”

Camossi is thinking long-term with the next Olympics in Paris only two years away, plus the 2024 European Championships in Rome.

First, though, Jacobs is aiming to recover in time to compete at the Golden Gala meet in Rome on June 9 — his first major international outdoor competition since Tokyo.

“Marcell is a national hero,” Camossi said. “It’s really going to be something to see him run at the Stadio Olimpico with a tattoo of the colosseum on his arm.”

Once the season ends, Jacobs will marry his longtime partner, Nicole Daza, with whom he has had two of his three children.

“There are 18 relatives from the U.S. coming for the wedding,” Jacobs said, adding that it will mark his father’s first time in Italy since before he was born. “I’m really happy to have reconnected with that part of the family.”