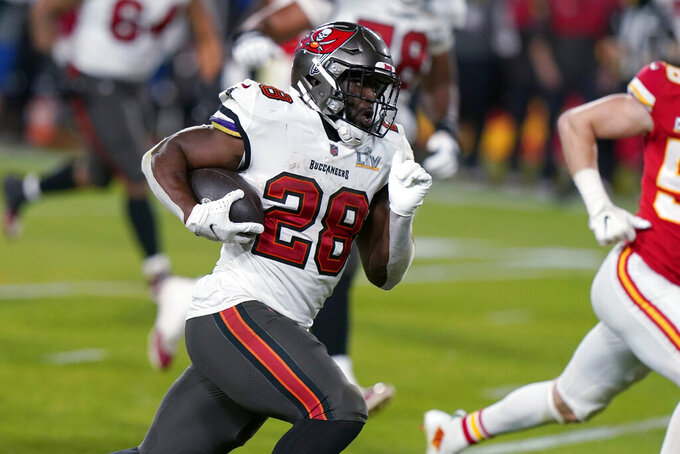 FILE - In this Feb. 7, 2021, file photo, Tampa Bay Buccaneers running back Leonard Fournette sprints to the end zone to score on a 27-yard touchdown run during the second half against the Kansas City Chiefs in the NFL football Super Bowl in Tampa, Fla. The Buccaneers moved closer to a goal of retaining all 22 starters from their Super Bowl victory, agreeing to a one-year, $3.25 million contract to bring free agent running back Fournette back for next season. (AP Photo/Lynne Sladky, File)

TAMPA, Fla. (AP) — The Tampa Bay Buccaneers moved closer to a goal of retaining all 22 starters from their Super Bowl victory, agreeing to a one-year, $3.25 million contract to bring free agent running back Leonard Fournette back for next season.

A person familiar with the deal that could be worth up to $4 million with incentives spoke to The Associated Press on the condition of anonymity Friday because the agreement had not been announced by the Bucs.

Fournette joined the team after being released by the Jacksonville Jaguars near the end of training camp last summer. He struggled at times to adjust to a role as a backup to Ronald Jones, but played a key role late in the season and during the playoffs while Jones was slowed by injuries and a stint on the COVID-19 list.

The fourth overall pick from the 2017 draft rushed for 300 yards and three touchdowns, while also catching 18 passes for another 148 yards and one TD during the four-game playoff run Tampa Bay capped with a 31-9 victory over Kansas City in the Super Bowl.

Seven players who started the title game against the Chiefs, including Fournette, were eligible to become free agents this winter.

Kicker Ryan Succop also signed a multi-year contract rather than test free agency after going 9 for 9 on field-goal attempts during the postseason.

Now that Fournette has agreed to return, free agent wide receiver Antonio Brown is the only key player from the Super Bowl roster whose future with the Bucs remains uncertain.

Fournette, 26, was Tampa Bay’s second-leading rusher during the regular season with 367 yards and six touchdowns. He's run for 2,998 yards and 23 TDs in four NFL seasons.