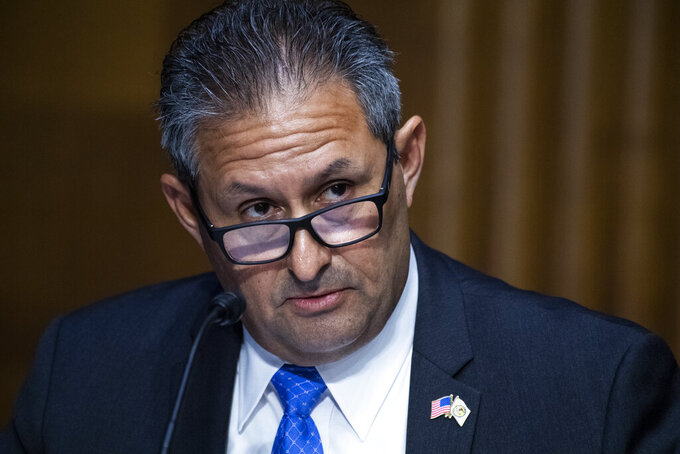 FILE - In this June 2, 2020, file photo, Michael Carvajal, director of the Federal Bureau of Prisons, testifies during a Senate Judiciary Committee on Capitol Hill in Washington. Senior officials in the Biden administration have been discussing whether to remove the director of the beleaguered federal Bureau of Prisons, one of the few remaining officials from the Trump administration. (Tom Williams/CQ Roll Call/Pool via AP)

WASHINGTON (AP) — Senior Biden administration officials have discussed whether to remove the holdover director of the beleaguered federal Bureau of Prisons who has been at the center of the agency’s myriad crises.

The discussions about whether to fire Michael Carvajal are in the preliminary stages and a final decision hasn’t yet been made, two people familiar with the matter told The Associated Press. They were not authorized to publicly discuss the internal talks and spoke on condition of anonymity.

But there’s an indication that the bureau is shaking up its senior ranks following growing criticism of chronic mismanagement, blistering reports from the Justice Department’s inspector general and a bleak financial outlook.

Since the death of Jeffrey Epstein at a federal lockup in New York in August 2019, The Associated Press has exposed one crisis after another, including rampant spread of coronavirus inside prisons and a failed response to the pandemic, escapes, deaths and critically low staffing levels that have hampered responses to emergencies.

At least two regional directors, the officials in charge of federal lockups in the South Central and the Southeast regions — including a Texas prison where inmates routinely walked off the grounds to retrieve drugs and other contraband delivered to them in the woods — are also being replaced.

The Bureau of Prisons said the two regional directors — Juan Baltazar, Jr. and J.A. Keller — are retiring and had been planning to do so. But two other people familiar with the matter said that neither had planned to leave for months and were told other officials were being appointed to their jobs.

On Wednesday, the agency said it was appointing wardens William Lothrop and Heriberto Tellez to the regional posts. Tellez is currently in charge of the Metropolitan Detention Center in Brooklyn, where a 34-year-old inmate was found dead in his cell early Wednesday.

British socialite Ghislaine Maxwell is also being held at the jail. Last year, her lawyers sought to question Tellez about the constant surveillance she has been subjected her to since her arrest on sex trafficking charges, but a judge refused.

The Justice Department, which runs the bureau, did not directly address whether officials were considering removing Carvajal, one of the few remaining holdovers from the Trump administration. Instead it said it was working to put in place recommendations made by both the department’s inspector general and the Government Accountability Office and is undertaking other changes.

“Director Carvajal has formed a task force to help address the fundamental challenges facing BOP,” the Justice Department said in a statement to the AP. “That work is an important priority.”

Implementing the changes “will be critical to advancing BOP’s mission — ensuring that inmates are housed safely and securely, and also providing critical programming and rehabilitation to help those inmates successfully reenter society after they have served their time,” the statement said.

Carvajal took over as director in February 2020, just before the pandemic began raging in the bureau's facilities nationwide, leaving tens of thousands of inmates infected with the virus and resulting in 240 deaths. He also oversaw an unprecedented run of federal executions in the waning months of the Trump presidency that were so poorly managed they became virus superspreader events.

Nearly one-third of federal correctional officer jobs in the United States are vacant, forcing prisons to use cooks, teachers, nurses and other workers to guard inmates. The expanded use of that practice, known as augmentation, has been raising questions about whether the agency can carry out its required duties to ensure the safety of prisoners and staff members while also putting in place programs and classes required under the law.

Over the past 18 months, 30 prisoners have escaped from federal lockups across the U.S. — and nearly half still have not been caught. At some of the institutions, doors are left unlocked, security cameras are broken, and officials sometimes don’t notice an inmate is missing for hours. Prisoners have broken out at lockups in nearly every region of the country.

The agency’s staffing levels have reached a critical point under Carvajal’s tenure and officers at several facilities have held protests calling for him to be fired. The agency claims its hiring programs have been successful, though it has significantly slowed its hiring process, pausing most new hires until at least October.

The bureau said it expects to bring on 1,800 new employees, that the initiative has been “a huge success” and continues to focus on hiring and training staff.

The agency has also been plagued by such serious misconduct that then-Attorney General Bill Barr launched a special task force to address criminal wrongdoing by officers at several prisons after a loaded gun was found smuggled in the Metropolitan Correctional Center in New York City, the federal jail where Epstein killed himself in August 2019.