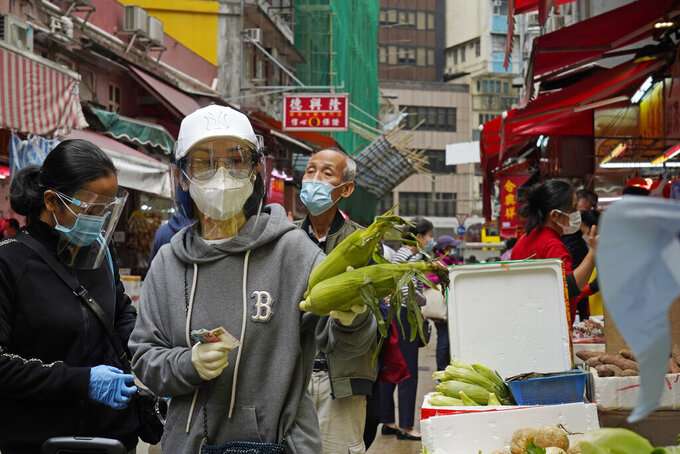 People wearing face masks to protect against the spread of the coronavirus shop at a local market in Hong Kong, Tuesday, Dec. 8, 2020. Hong Kong leader Carrie Lam said social distancing measures will be tightened as cases of the coronavirus continue to surge, with a ban on nighttime dining and more businesses ordered to close. (AP Photo/Kin Cheung)

HONG KONG (AP) — Hong Kong leader Carrie Lam says social distancing measures will be tightened as cases of the coronavirus continue to surge, with a ban on nighttime dining and more businesses ordered to close.

Lam said at a regular news conference Tuesday that there will be a ban on dine-in services at restaurants after 6 p.m., and venues such as massage parlors, beauty salons and gyms will be closed temporarily. She did not specify when the measures will take effect.

“We all need to be mentally prepared about more measures to be rolled out,” Lam said, adding that there was “no choice” given the current virus situation in the city.

Hong Kong is grappling with the latest surge of coronavirus infections, with nearly 1,200 new cases in the last two weeks after a three-month lull.

Many of the cases in the recent surge have been linked to outbreaks in dance studios across the city, with Hong Kong ordering those who have visited stipulated venues to undergo mandatory testing. Clusters have also been found at a department store, a public housing estate and construction sites in the city.

In other developments in the region:

— South Korea says it plans to secure around 84 million doses of coronavirus vaccines for a mass immunization program that officials hope will allow the country to restore some level of normalcy by mid-to-late 2021. Health Minister Park Neung-hoo said Tuesday that the doses would cover 44 million people in a population of about 51 million. The shots will be delivered first to medical professionals, essential workers and people most at risk from COVID-19, including senior citizens and residents at long-term care facilities, starting possibly within the first half of next year, although officials didn’t provide a specific timetable. While the vaccines will begin to arrive in South Korea in February or March, Park said officials will take a cautious approach in administrating them and could spend two or three months reviewing the vaccination results of other countries and evaluating safety risks. Still, the country expects to vaccinate half its population at some point “not too late” in 2021, Park said.

— Authorities have ordered mass coronavirus testing and locked down some locations in the southwestern Chinese city of Chengdu following the detection of two new virus cases there. Chengdu health officials identified the cases as a 69-year-old woman, who’s condition is listed as serious, and her 71-year-old husband, who has yet to show symptoms. Officials at a Monday night news conference said they are still investigating the source of the infection in Sichuan province’s capital and largest city, which has been relatively unscathed by the pandemic. Five locations in Chengdu’s Ludu district have been sealed off, including a hospital, a school and a wholesale market, and more than 21,000 people had been tested as of Monday evening, the government said.

— Australia says it will extend its ban on international cruise ships and on Australians leaving the country except under exceptional circumstances for another three months until March. The extension means the human biosecurity emergency declaration will last for at least a year despite COVID-19 cases declining in the nation. Australia has imposed some of the most severe border restrictions in the world since the pandemic began, requiring most of its citizens and permanent residents to apply for a permit and prove exceptional circumstances if they need to leave the country. Health Minister Greg Hunt said Tuesday that the departure ban was “very hard for Australians.” Australia is a nation of 26 million people. Latest government figures showed there were only 1,618 active COVID-19 cases, with 30 patients in hospitals. In all states but the former hot spot Victoria, most of the infections were acquired overseas rather than from community transmission within Australia.

— Three coronavirus vaccine developers -- AstraZeneca, Pfizer Inc. and Bharat Biotech -- have applied for emergency approval for their use in India, health officials said Tuesday. Serum Institute of India, which is the world’s largest vaccine manufacturer and is licensed to make the Oxford University -AstraZeneca vaccine in India, has applied for an emergency use license based on phase-three trials in India and other countries, the officials said at a news conference. The Indian company Bharat Biotech has applied for a license for its experimental inactivated virus vaccine without completing phase-three trials. According to Indian rules for accelerated approval of vaccines, a company can be granted a license if regulators are “satisfied with the risk-benefit ratio,” said Balram Bharagava, head of the Indian Council of Medical Research. Pfizer has applied for permission to import its experimental mRNA vaccine for sale and distribution without clinical trials in India, the officials said. The company said in a statement that it would supply the vaccine “only through government contracts based on agreements with respective government authorities” after approval. This vaccine needs to be stored at very cold temperatures, which India’s existing infrastructure is unlikely to be able to provide.