Is this an 'Asterisk Oscars' or a sign of things to come? 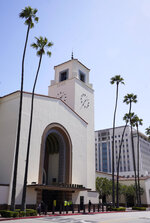 In 93 years of existence, the Oscars have been postponed by shootings — the assassination of Martin Luther King Jr. and the attempted killing of Ronald Reagan — and by a flood, when 1938 rainstorms overwhelmed the Los Angeles River. Sunday’s ceremony will be the first Academy Awards delayed by a pandemic.

After a year that erased movie titles from marquees and sent seismic shockwaves through Hollywood, the show is going on — two months later than usual, in a crowdless ceremony at Los Angeles’ Union Station and with a batch of nominees that have barely played in movie theaters. The biggest box office of the best-picture nominees belongs to “Promising Young Woman” — a pandemic blockbuster with $6.3 million in U.S. ticket sales.

That this is all very strange goes without saying. Given such an unusual year, this year’s awards have been called the “Asterisk Oscars.” But there is reason to believe, and even to hope, that some of this year’s changes are here to stay.

The broadcast, beginning 8 p.m. EDT Sunday on ABC after a red-carpet pre-show, will be the most transformed in decades. The show’s producers, led by filmmaker Steven Soderbergh, are pledging an entire makeover, one perhaps long overdue for an institution resistant to innovation. They plan to treat the awards more like a movie, including shooting it in 24 frames-per-second, rather than the typical 30. Zooms are strictly forbidden. Instead, tested and quarantined maskless nominees will gather at the downtown train station, while satellite feeds connect others from around the world.

On the heels of a humbling year, the Oscars — usually a frothy night of self-congratulation — this year may feel more like a therapeutic rally for an industry in the midst of convulsive change.

Just the weeks leading up to the Academy Awards saw one of Los Angeles’ most iconic movie theaters, the Cinerama Dome, along with ArcLight Cinemas, go out of business. When the Walt Disney Co. announced that it would delay “Black Widow” from May to July and open it both theatrically and on Disney+, cinemas shuddered. Adding to the sense of wholesale change was the news that Searchlight Pictures’ Nancy Utley and Steve Gilula — who have steered so many Oscar winners, including this year’s best-picture favorite, Chloé Zhao’s “Nomadland” — were stepping down.

“Even as the pandemic is winding down, I don’t know that we’re going to return to business as usual,” said Darnell Hunt, dean of UCLA's College of Social Sciences, who studies Hollywood.

That’s good news, too. 2020 saw, Hunt says, “profound diversity” unlike any year before. In a study released Thursday and authored by Hunt and Ana-Christina Ramón, researchers found that 42% of roles overall and 39.7% of lead roles in 2020 films were played by actors of color — roughly in line with U.S. population demographics.

There are many caveats. Representation still lags behind the camera and among executives. With many of the biggest studio films put on hold, smaller, lower-budget films — many of them streamed — were much of 2020’s atypical output. But the diversity of those films has also transferred to the Oscars. In recent years, the film academy — which this year extended eligibility by two months and to films that bypassed movie theaters — has made strides in expanding its membership. In the coming years, the academy will institute inclusion standards in the best-picture category.

A record nine of the 20 acting nominees are non-white. If Viola Davis ("Ma Rainey's Black Bottom"), Chadwick Boseman ("Ma Rainey's Black Bottom"), Yuh-Jung Youn ("Minari") and Daniel Kaluuya ("Judas and the Black Messiah") all win — as they did at the Screen Actors Guild Awards — it would be the first time people of color swept the acting awards, and a dramatic reversal from the recent years of “OscarsSoWhite.”

More women are nominated than ever before. Two — Emerald Fennell (“Promising Young Woman”) and Zhao — are nominated for best director for the first time. (Only five women have ever been nominated until now.) Zhao, the clear front-runner, is poised to be only the second woman to ever win the award, and the first woman of color.

Yes, it's an odd year. But with a class of widely admired films and roundly applauded nominees from groups that have historically been marginalized by the academy, a sea change in Hollywood is set to stirringly take the stage.

“This is clearly a watershed moment for the Oscars,” says Hunt. “It shows us what’s possible. If you go for generations without ever acknowledging the actors, director and writers of color, it’s hard to break out of that pattern. Now we’re creating a whole new culture of what’s Oscar worthy.”

Streaming — “a different animal,” says Hunt — has played a major role in making the film industry more inclusive. But it’s also disrupted and morphed movie culture. The Oscar nominees, like most films in the past year, were watched largely at home in more solitary settings than the packed theaters that usually feed the buzz of Oscar season. “Nomadland” found its largest audience, after a theatrical run, on Hulu. Netflix leads all studios with 36 nominations. Movies are more widely and more easily accessible on streaming services, but their grip on popular culture is potentially less firm amid oceans of digital content.

According to a survey last month of 1,500 active entertainment consumers by the research firm Guts + Data, not many people are familiar with this year’s Oscar nominees. Some 35% hadn’t heard of any of the eight films up for best picture. Warner Bros.’ “Judas and the Black Messiah” ranked highest with 42% awareness but only 12% had watched it. Sunday’s lead-nominee, Netflix’s “Mank,” was unfamiliar to 82% of respondents.

You could chalk some of that up to people having their attention elsewhere during a global pandemic. But some believe cinemas are the missing link. On Sunday, Patrick Corcoran, vice president of the National Association of Theater Owners, hopes to see a connection between movies “and the movie theaters that make the experience of seeing movies so special.”

“I think people already feel that,” says Corcoran. “It’s why the ratings for movie awards shows have fallen so precipitously this year – movie theaters are the missing element that drives the interest in movies and lifts their presence in the culture.”

Award show ratings, along with everything else on linear television, had been declining before the pandemic. Last year’s Oscar broadcast, in which Bong Joon Ho's “Parasite” triumphed, had the smallest U.S. audience ever, with 23.6 million total viewers, according to Nielsen.

But ratings have nosedived this year. The Golden Globes dropped 63% to 6.9 million viewers. The Grammys fell 51% to 9.2 million. The Oscars are sure to sink to their lowest audience ever. Less clear is if that’s part of a downward trend — or another asterisk.

“I don’t worry about it,” says Soderbergh, who says he’s focused on putting on the best show possible. “The larger issue of whether this is a secular shift or a cyclical shift, we don’t know. It’s still too early to tell. But it doesn’t really meet my metric for tragedy or outrage.”