ATHLETES ON: Killing time when not competing 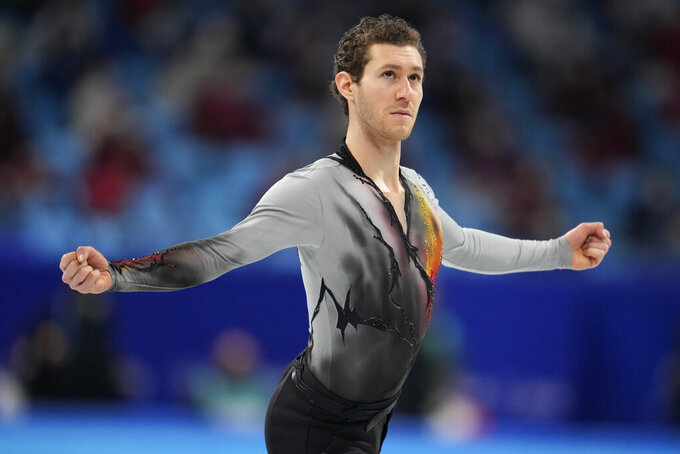 Jason Brown, of the United States, competes in the men's free skate program during the figure skating event at the 2022 Winter Olympics, Thursday, Feb. 10, 2022, in Beijing. (AP Photo/Natacha Pisarenko)

BEIJING (AP) — Football, video games and dress-up are some of the ways athletes at the Beijing Olympics are keeping busy when they're not competing.

As part of the strict COVID-19 protocols, athletes and others at the Games can only move between select sites, Keeping them in that “bubble” is supposed to prevent the virus from getting in or out in the local population. That means athletes can't go out and explore the city during their off time.

Here's how some are spending their time instead.

Tossing around a football and playing video games help Paul Schommer and his biathlon team pass the time. Their game of choice at the moment is Mario Kart, which they play on their smartphones.

“I’m not as into it as some of my teammates, but I definitely like to join in on that,” the 29-year-old said.

Schommer also likes watching sports highlights and TV shows from back home. For reading, he has his Bible and a Kindle, on which he’s reading “American Buffalo,” about author Steven Rinella’s hunt for the wild animal in the Alaskan wilderness.

The team also likes looking up trivia online, he says, such as how Green Bay Packer Equanimeous St. Brown got his name.

“Sometimes you just spend half an hour diving deeper into these topics, and you just kind of, like, laugh at some of the crazy stories,” he said.

Tommy Ford expected temperatures at the mountain slope venues of the Beijing Winter Games to be chilly. He didn’t expect it to be as challenging to stay warm.

So to pass the time between practice and slalom runs, he and his teammates have played dress-up.

“We’ve been trying a lot of different outfits on,” Ford said, laughing.

That’s not the only thing he’s been doing to unwind. Someone in the Yanqing Olympic Village has a set of virtual reality goggles. That’s doing the trick, Ford said.

“There’s a first-person shooter thing,” he said. “I don’t know a lot of shooter games, but that was pretty interesting. There’s also Fruit Ninja. We’ve played a little Mario Kart.”

When Dutch snowboarder Niek van der Velden isn't strapped to his board, he likes playing video games with his teammates on the PlayStation they brought.

“Mostly we’re gaming,” van der Velden said after a practice session at the Shougang big air venue on Beijing’s outskirts. He said the lounge in the Olympic Village is also nice, and has table tennis.

He also likes watching short videos on YouTube and brought his DJ kit for his spare time. “So that’s super chill,” he said.

Max Parrot says there’s plenty at the Olympic Village to keep him busy.

“There’s like a huge gym with, like, two stories. It’s pretty big,” said Parrot, who took the gold in the snowboarding slopestyle event and is also competing in the big air event. He said there are also pool tables, ping-pong tables and virtual reality games he has played “for hours” with teammate Seb Toutant.

Parrot said the virtual reality games are mind altering: “You’re on a submarine going underwater and you’re on a chair that moves,” he said, noting that the motion gets you “pretty dizzy.”

Sports massages are also part of downtime, which has been scarce for Parrot since his comeback from cancer raised his public profile. “I think the rest will will come after the games.”

Video chatting on his mobile phone has helped keep figure skater Jason Brown connected with friends and family during the high-pressure competition.

But there is another phone app helping him pass the time in the bubble: Spider Solitaire.

It’s “my go-to game,” said Brown, who wrapped up his Olympics last week as his teammate Nathan Chen clinched gold.

Still, the limitations on movement haven’t been as jarring as some suspected, he added.

“In the last few years, we’ve gotten really used to COVID and all the protocols. We’ve had to adapt in ways, kind of shut off and be isolated. So it’s almost like this is normal.”

Keegan Messing hadn’t had a lot of time to process being in the Olympic bubble before it was his turn to skate in the men’s freestyle event last week. A positive COVID-19 test delayed his departure from Canada to Beijing, and he’d arrived just two days before his event.

“It’s been a hurricane of emotions,” Messing said. “The lack of hugs, the lack of closeness, the old friends that you haven’t seen since the last games. It almost feels like a small piece of humanity is being left out of the mix.”

The Canadian figure skater said he has coped with the complex emotions video chatting via his mobile phone.

“I do a lot of FaceTime with my son and my wife back home,” he said.

— ATHLETES ON: Best things they've eaten in the Olympic bubble