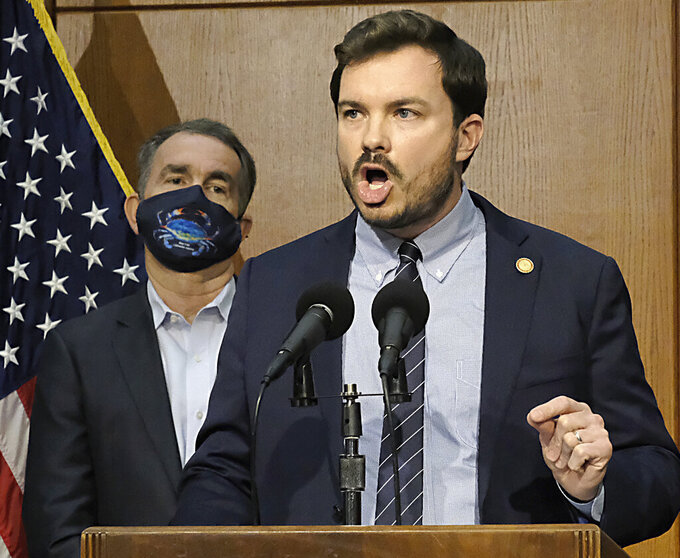 FILE - In this Tuesday, March 9, 2021 file photo, Gov. Ralph Northam, left, listens as his chief of staff, Clark Mercer, answers a question about the investigation of the Virginia Parole board during a press conference at the Patrick Henry Building in Richmond, Va. In a 2020 meeting, members of Northam’s administration, including Mercer, criticized the state inspector general over his ongoing investigation into the parole board and made clear they wanted to keep subsequent findings from being made public, according to an audio recording of the conversation. (Bob Brown/Richmond Times-Dispatch via AP)

RICHMOND, Va. (AP) — In a combative meeting last year, members of Virginia Gov. Ralph Northam’s administration criticized the state inspector general over his investigation into the parole board and made clear they wanted to keep subsequent findings from being made public, according to an audio recording of the conversation.

The meeting took place shortly after Republican lawmakers released to reporters the watchdog agency’s unflattering findings about procedural violations in the case of Vincent Martin, who received a life sentence for killing a Richmond police officer. It was one of several parole matters that have since been investigated.

The tape, obtained by news outlets and first reported by the Richmond Times-Dispatch, offers new insight into the ongoing controversy that has become a bitter and mostly partisan dispute in a critical election year for Virginia.

In the meeting, Inspector General Michael Westfall informed members of Northam's administration that reports into about a half-dozen more parole cases were underway and said violations in those were even “clearer” than in Martin's case.

Northam's chief of staff, Clark Mercer, responded that the pending reports put the administration in “a pickle” because they anticipated that Republican legislative leaders, who are required to receive notice of the IG's findings, would again share them with the news media.

“I just want to get a handle on when that’s going to go out and if it’s going to go out soon what precautions we have against that getting forwarded to The Associated Press again," said Mercer, who made other references to finding a way to keep the reports from the media.

Alena Yarmosky, Northam's spokeswoman, said the whole matter had become an “absolute circus." She condemned what she called “unauthorized leaks of confidential information" and noted that Virginia law protects the privacy of parole files.

During the meeting, Mercer also made clear he wanted any problems at the board corrected and expressed sympathy for the victim's family in Martin's case.

He further described receiving a call from a “police organization” warning him that people who opposed Martin's parole planned to use the IG's fraud hotline to submit anonymous complaints in an effort to block Martin's release. Martin, who served 40 years for the killing, was released in June.

Brian Moran, Northam's secretary of public safety and homeland security, told Westfall during the meeting he thought the IG’s office was being used as a “political tool” and maintained the parole board had done nothing wrong.

Moran chastised Westfall, saying of the Martin report: “You yourself have acknowledged that this is significant, this was in the press. And then just to write this in the way it was written knowing how it would be received and the disservice it would be on the parole board and us — I don’t know how you can defend that, Mike.”

The IG's office has found a pattern of potentially long-running problems related to victim and prosecutor notifications. The administration has generally characterized them as minor. Many of the decisions that triggered complaints were made amid a push to get eligible inmates out of crowded prisons as the coronavirus pandemic worsened last spring.

After the meeting, Westfall can be heard saying to colleagues that the clash with the administration might lead “to me getting a new job against my will.”

The lead investigator in the parole board matter, Jennifer Moschetti, was part of the meeting. She declined comment through her attorney, Tim Anderson.

Moschetti, who was recently fired, sought to come forward as a whistleblower by providing lawmakers with documents of what she alleged was wrongdoing related to the investigation. She also filed a lawsuit against Westfall after being initially put on leave from her job. She alleged in her suit, since dropped, that the meeting was intended to intimidate Westfall and other investigators.

Most of the meeting was spent sparring over the Martin report, which was almost entirely redacted when reporters first requested it under public records requests. When GOP lawmakers released it, it made clear the IG had found problems.

Last month, news outlets obtained a longer draft report in the Martin case that contained more critical conclusions and allegations about errors made in the case. The reasons for the changes in that document have not been fully explained.

The meeting suggests the governor's administration had no knowledge of the longer version of the Martin report, as Westfall previously attested.

Lawmakers recently approved funds for an outside probe of the IG's handling of the matter.

On Monday, GOP lawmakers repeated their call for a fuller legislative investigation. Republican Senate leaders in a joint statement called the recording “deeply disappointing and disturbing,” saying the administration was focused only on "how the facts revealed by that report would make them look.”

Democratic Sen. Scott Surovell said Monday that “the whole thing smells like a political hit” and that for Republicans: “It’s the last gasp of the tough-on-crime movement asserting themselves.”