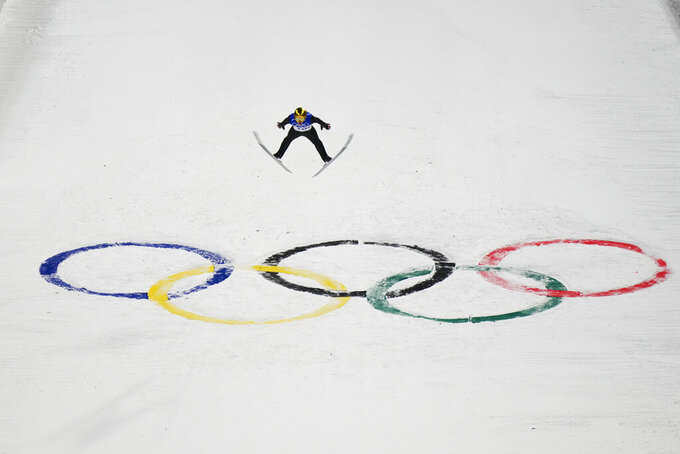 Manuel Fettner, of Austria, soars through the air during a men's team ski jumping first round at the 2022 Winter Olympics, Monday, Feb. 14, 2022, in Zhangjiakou, China. (AP Photo/Andrew Medichini)

ZHANGJIAKOU, China (AP) — Austria won Olympic gold in the ski jumping team event on Monday, four years after failing to even earn a medal in the event at the 2018 Pyeongchang Games.

Fettner jumped 128 meters (420 feet) on his final jump to soar past Slovenia, sealing the first-place finish for the four-man team.

“The pressure is not only on your shoulders," said Fettner, who won silver on the normal hill at this year's Beijing Games.

Fettner, Stefan Kraft, Daniel Huber and Jan Hoerl combined to score 942.7 points, beating Slovenia by 8.3 points with a combination of jaw-dropping distances and style that impressed the judges.

Slovenia went into the final round with a nine-point lead over Austria. Norway, Germany, Japan and Poland followed after the first round in the last ski jumping event of the 2022 Olympics, but they couldn't keep up with the top two nations.

The Austrians led Slovenia by 5.3 points when each country was down to its fourth and final jumper as Norway and Germany fell back in the eight-nation field, and Fettner's final jump gave them the gold.

Germany's result was particularly impressive because the team didn’t have two-time gold medalist Andreas Wellinger in its lineup because he tested positive for COVID-19.

“I know Wellinger is coming back stronger, and I cross my fingers for him individually," German jumper Markus Eisenbichler said.

The Norwegians finished fourth in the team event, followed by Japan and Poland.

Norway, Germany and Austria each won gold at the previous three Olympics in the team event. The traditional powers have finished first since Japan earned the top spot on the podium on its home hill at the 1998 Nagano Games in the first team event.

Marius Lindvik of Norway won on the large hill Saturday, holding off Ryoyu Kobayashi of Japan, who finished first on the normal hill at the Beijing Games.

Men have been ski jumping at the Winter Olympics since the first edition in 1924, and have had an opportunity to compete as teams since 1988.

Swiss jumper Simon Ammann has competed in every Olympic team ski jumping event. The 40-year-old, seven-time Olympian probably won't compete at the 2026 Milan-Cortina Games, saying it's time for the younger generation to jump for Switzerland.

Women, who did not have access to the sport at the Olympics until 2014, competed in their only individual event more than a week ago. Ursa Bogataj of Slovenia won gold.

The Slovenians also won gold in the first Olympic ski jumping mixed team competition, taking advantage of five women being disqualified for having jumpsuits that were too large and created an aerodynamic advantage.

American jumpers Casey Larson, Kevin Bickner, Decker Dean and Patrick Gasienica teamed up to finish 10th — ahead of only the host Chinese team — with a lackluster result that was expected.

The U.S. has won only one Olympic medal, a bronze, in ski jumping in nearly a century of competitions.

“We don’t really have a lot of jumpers, but it’s getting better,” the 23-year-old Gasienica said. “Especially since the pandemic, a lot of different kids are joining the different clubs around America. Hopefully in a couple of years — five, 10, maybe — we’ll have a really, really great team.”