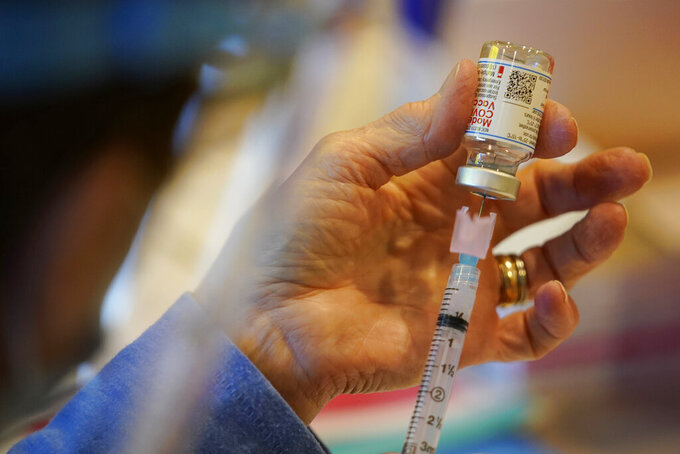 FILE - In this Dec. 29, 2020, file photo, Pat Moore, with the Chester County, Pa., Health Department, fills a syringe with Moderna COVID-19 vaccine before administering it to emergency medical workers and health care personnel at the Chester County Government Services Center in West Chester, Pa. Moderna says its COVID-19 vaccine strongly protects kids as young as 12. The company released the preliminary findings Tuesday, May 25, 2021, based on testing on more than 3,700 12- to 17-year-olds in the United States. (AP Photo/Matt Slocum, File)

BATON ROUGE, La. (AP) — An effort to prohibit people who haven’t been vaccinated against COVID-19 from being denied access to state buildings, public colleges and any facility funded by the state stalled Wednesday in a House committee.

But while the House and Governmental Affairs Committee narrowly rejected the Senate-backed proposal by Republican Sen. Stewart Cathey, another measure to do the same thing has won House support and awaits debate in the Senate.

Cathey, of Monroe, said he wanted to protect the rights of people making personal medical decisions. He said he and and his girlfriend won't get the COVID-19 vaccine because they are concerned it could damage their abilities to have children, but shouldn't be barred from watching a football game at Tiger Stadium because of their decision.

There’s no evidence that any vaccines, including COVID-19 vaccines, affect fertility, according to the U.S. Centers for Disease Control and Prevention and the American College of Obstetricians and Gynecologists. And Louisiana State University hasn't indicated it planned to require vaccine proof to get in any of its facilities, like the stadium.

Bill opponents, such as Democratic Rep. Rodney Lyons of Harvey, said individual facilities should decide what's in the best interest of the health of employees and visitors.

The House committee vote 7-6 against the bill, with Democrats in opposition and Republicans in support. Several Republicans were absent.

But a separate proposal by Republican Rep. Kathy Edmonston, of Gonzales, seeking to achieve a similar goal could reach final passage.

Edmonston's bill would prohibit state and local government agencies from refusing to issue licenses, permits and degrees or barring access to public facilities to someone who isn’t vaccinated against COVID-19. That measure passed the House on a 70-30 vote and awaits a Senate hearing.