Barely out of crisis, Greek economy hammered by new lockdown 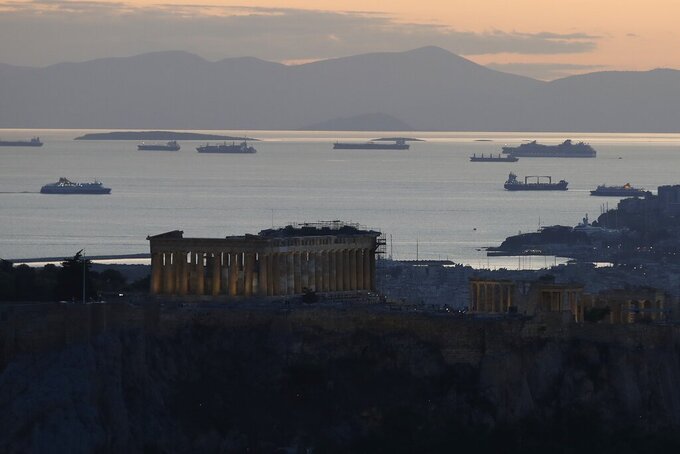 The Parthenon temple is illuminated atop of the Acropolis hill as a ferry approaches the port of Piraeus as another one departs in Athens, Monday, Oct. 26, 2020. (AP Photo/Thanassis Stavrakis)

Greece has downgraded its forecasts for the economy this year to include the impact of a second lockdown, and says the national debt is now expected to exceed 200% of annual output.

The Finance Ministry on Friday said that it expects the economy to contract by 10.5% in 2020 and rebound by a modest 4.8% next year, according to figures presented in the 2021 Budget to parliament.

The estimates were revised from an 8.2% drop and 7.5% bounce back forecast in a draft budget submission last month.

The new restrictions, which closed most stores and all schools, was due to last three weeks but is likely to last longer, according to government officials.

“The 2021 Budget is, unfortunately, being prepared under extremely adverse conditions,” the Finance Ministry said. “It comes at a time when societies and the global economy continue to suffer from the worst health crisis of the last hundred years and, consequently, the worst annual global recession since the end of World War II.” The national debt is now expected to surge to 208.9% of GDP this year or 340 billion euros, from 180.5% in 2019, before easing to 199.6% next year.

The pandemic has rocked the Greek economy which is heavily dependent on tourism and remains burdened with high levels of public and private debt following years of financial crisis and successive international bailouts programs between 2010 and 2018.

Greece is expected to receive some 31 billion euros in financial support from the European Union as part of its recovery package.