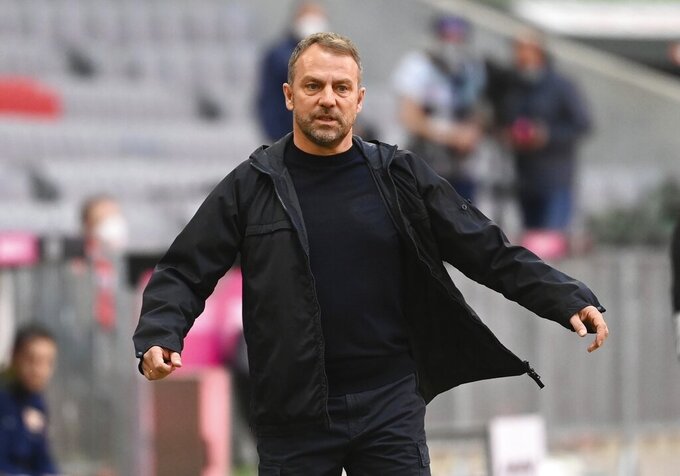 The defending champion needs to make up a one-goal deficit in the second leg to avoid going out. Bayern lost the first leg 3-2 in Munich last Wednesday – Flick’s first defeat in the competition since he took over in November 2019.

But Flick, who has clashed with sporting director Hasan Salihamidžić, has cut an increasingly annoyed figure as he continues to face repeated questions on whether he will still be at the Bavarian powerhouse next season.

Flick warned Friday that he will not answer any questions on the subject and engaged in a verbal spat with Sky reporter Patrick Wasserziehr on Saturday before Bayern’s 1-1 draw with Union Berlin in the Bundesliga.

“Next question!” Flick responded again and again to Wasserziehr’s queries about whether he will still be at Bayern next season, or if he will fulfill his contract if Bayern’s sporting leadership changes.

Flick has a contract to 2023 at Bayern but the Germany coaching position will be vacant after Joachim Löw finally steps down after this summer’s European Championship. Flick was previously Löw’s assistant from 2006 to 2014 and the relative serenity of the national team position may appeal after nearly two stressful seasons at Bayern.

On Friday, he said that his squad isn’t as strong this season as it was last year, when he led Bayern to a Champions League, Bundesliga and German Cup triple in his first season.

Though Flick said since that he wanted to draw attention to the current team’s achievements, it was widely seen as another attack on Salihamidžić, who is responsible for Bayern’s player signings.

The tension between Flick and Bayern’s sporting director goes back to January 2020, when the Bayern coach asked for reinforcements at right back. Flick wanted Shakhtar Donetsk’s Dodô or Monaco’s Benjamin Henrichs (now at Leipzig) but received Álvaro Odriozola on loan from Real Madrid. The Spaniard barely played before going back to Madrid.

Salihamidžić’s summer signings have also barely featured under Flick. Marc Roca was supposed to help make up for Thiago Alcântara’s departure for Liverpool, Brazilian winger Douglas Costa returned after departing unwanted in 2017, and French defender Bouna Sarr has largely watched from the sidelines. It was noteworthy that Flick did not even bring Sarr on against PSG in the first leg when Benjamin Pavard was clearly struggling with an injury.

Fellow defender Jérôme Boateng was told earlier that day his contract will not be extended at the end of the season. Of all Bayern’s defenders, only David Alaba – who is also leaving – has made more Bundesliga appearances than the 32-year-old Boateng, whom Flick would reportedly like to keep at the club.

Flick’s biggest immediate concern is top-scorer Robert Lewandowski’s knee injury, sustained while the Poland star was away on international duty. With 35 goals in 25 Bundesliga appearances this season, it’s arguable that Lewandowski would have made more of Bayern’s chances had he been available for the first leg against PSG. Lewandowski, who returned to running drills on Monday, will not be fit in time.

Serge Gnabry is also out after testing positive for the coronavirus last week, leaving Eric Maxim Choupo-Moting to lead Bayern’s attack against his former team.

Defender Niklas Süle is out with a thigh injury, but left back Lucas Hernández, midfielder Leon Goretzka, winger Kingsley Coman and Boateng all trained normally Monday and Flick seemed optimistic that they, at least, will be available for the clash in Paris.