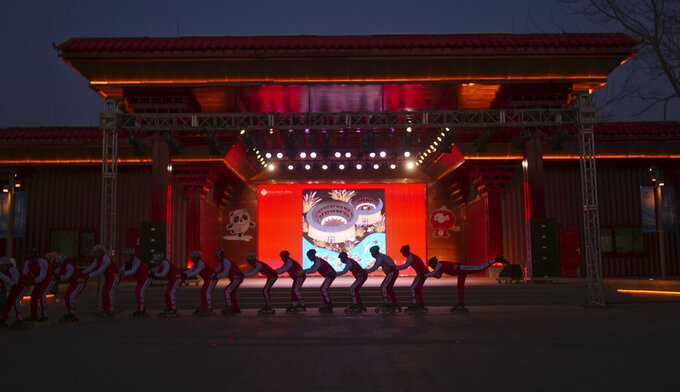 Rollerbladers move in unison at a Winter Olympics Culture Plaza in the western district of Shijingshan in Beijing on Friday, Feb. 4, 2022. China has launched a locked-down Winter Olympics. The country where the coronavirus outbreak emerged two years ago is projecting its might on the most global of stages as Chinese President Xi Jinping declared the Games open Friday. (AP Photo/Sam McNeil)

BEIJING (AP) — As the lights flashed on the Bird's Nest, the stadium designed for the previous Olympics in China, 63-year old Liu Wenbin was just one of many excited Beijing residents eager for the Games to begin.

It didn't matter that Beijing had just held the Olympics 14 years ago, or that the country had to artificially construct snow, or that the U.S. and several other Western countries were staging a diplomatic boycott over Beijing's internment of a large part of its minority Uyghur population.

Many Chinese were filled with pride — like Liu, who filmed the opening ceremony on his phone as he watched from home in western Beijing.

“As a Chinese person, I feel incomparably proud,” Liu said. “Our great China really is No. 1. Even when the pandemic is so severe, we’re still able to hold this highly anticipated international event, the Winter Olympics.”

Liu, a retiree from Beijing, was unable to see the event up close this year as tickets were only available to select groups owing to pandemic prevention measures. In 2008, he was too busy at work to snag tickets to Beijing's Summer Games, he said with some regret.

Even though the Olympics are being held with strict COVID-19 prevention measures, there was still a festive air in the capital city.

At the Winter Olympics Culture Plaza in Beijing, neighborhood dance troupes performed as families gathered to join in the excitement.

“This Winter Olympics, it’s like an international festival, and as a volunteer, it’s a hugely important thing for me as a college student, and even in my life,” said Zhang Xinrui, a college senior who was volunteering at the event. “You can hear from my voice how excited and how happy I am."

“I hope that our athletes do well, and together show the world our future," said Liu Jingyun, 69, who was part of a group of dancers performing with flat taiping drums, decorated with snowflakes.

The Chinese government, in hosting the Winter Olympics, has actively promoted winter sports, and that has successfully spread to some of the population.

Liu, who is from Beijing and unrelated to the dancer, said he sometimes takes his grandson to go skiing or ice skating. The family even went to Zhangjiakou, where part of the competition will be held, to see the ski trails, made with artificial snow from an intricate irrigation project.

And all the fervor and controversy abroad didn't bother him in the slightest.

“I think some countries are biased, and that's very natural," he said of the diplomatic boycott. “When you are living well, of course there will be someone who’s jealous.”