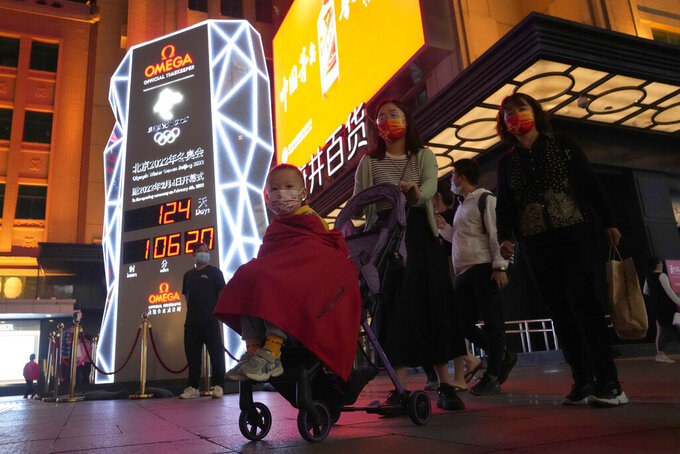 Residents wearing masks pass by a countdown clock for the Beijing Winter Olympic Games at the Wangfujing retail street in Beijing Sunday, Oct. 3, 2021. When the International Olympic Committee awarded Beijing the 2008 Summer Olympics, it said the Games would improve human rights and civil liberties in China. There is no such lofty talk this time with Beijing's 2022 Olympics - the first city to host both the Summer and Winter Games - opening in just four months on Feb. 4. (AP Photo/Ng Han Guan)

When the International Olympic Committee awarded Beijing the 2008 Summer Olympics, it promised the Games could improve human rights and civil liberties in China.

There is no such lofty talk this time with Beijing's 2022 Winter Olympics — the first city to host both the Summer and Winter Games — opening in just four months on Feb. 4.

Instead, there are some calls for governments to boycott the Games with 3,000 athletes, sponsors and broadcasters being lobbied by rights groups representing minorities across China.

IOC President Thomas Bach has repeatedly dodged questions about the propriety of holding the Games in China despite evidence of alleged genocide, vast surveillance, and crimes against humanity involving at least 1 million Uyghurs and other largely Muslim minorities.

Tibet, a flashpoint in the runup to 2008, remains one still.

“The big difference between the two Beijing Games is that in 2008 Beijing tried to please the world,” Xu Guoqi, a historian at the University of Hong Kong, said in an email to The Associated Press. “In 2022, it does not really care about what the rest of the world thinks about it."

An expert on Chinese sports and the Olympics, Xu said Beijing in 2008 attempted to placate “world opinion.”

“Now it tries its best to tell the world its intentions. If the world does not listen, so be it," Xu wrote.

Xi Jinping is now the powerful general secretary of the Chinese Communist Party, but in 2008 he was in charge of running the Olympics.

Beijing landed the 2008 Games after a long pursuit — its poor rights record helped end its bid for the 2000 Olympics.

Some IOC members were outspoken at the time about awarding the Olympics to China because it would give tacit approval to the country's conduct.

“Although Xi was in charge of 2008 Olympic Games, these Winter Games are truly Xi’s Games,” Xu wrote. “The Western countries literally decided to let Xi have his Games with no resistance in 2015 when Beijing was facing only one competitor.”

The 2022 Games were a long shot and came largely by default when several favored European cities, including Oslo and Stockholm, dropped out for political or financial reasons.

Almaty, Kazakhstan, was Beijing’s only remaining rival in the 2015 IOC vote.

Beijing organizers on Monday announced a series of test events kicking off this week. The first is a speedskating event — the China Open — staring on Friday. The tests are to be held under the same rigid guidelines published last week for the Olympics themselves. Athletes and everyone else are subject to strict controls that have the full support of the IOC.

The test events run through the end of the year.

“The prevention and protection work for the epidemic is the top priority for test events,” said Yao Hui, director of venue management for the organizing committee.

Huang Chun, a deputy director of the organizing committee, called cases from overseas “a big risk for our country.”

Organizers said about 2,000 participants from outside China, including athletes, technical staff, and officials, will take part in the tests in three competition areas.

Ice events will take place in Beijing with skiing and sliding in Yanqing, northwest of Beijing. Other events are in Zhangjiakou in neighboring Hebei province.

The IOC pushed for loosened reporting rules for journalists in the runup to the 2008. There is none of this now, with the pandemic put forth as the reason for the clampdown.

Some see the severe coronavirus protocols as a convenient excuse for heightened control of Olympic visitors.

“These measures can be justified as public health measures," said Sheena Greitens, who researches Chinese domestic security at the University of Texas, “but they have the ancillary benefit of avoiding a repeat of the last time the Olympics were held in Beijing, in 2008, when the torch relay was disrupted repeatedly by protestors and there were also protest attempts during the Games themselves."

Everyone attending the Olympics, including athletes, will be asked to be vaccinated, which the IOC encouraged but made voluntary in Tokyo. The alternative to full vaccination in China will be a 21-day quarantine. This would seemingly make it difficult for athletes to train.

Rules say no one will be allowed out of a “closed-loop management system,” which limits movement from arrival to departure and locks down the media.

“This closed-loop management system will cover all Games-related areas, including arrival and departure, transport, accommodation, catering, competitions, and the Opening and Closing Ceremonies,” the IOC said in its statement last week. “Within the closed loop, participants will be allowed to move only between Games-related venues for training, competitions and work. A dedicated Games transport system will be put in place.”

Only fans from mainland China will be allowed to attend the Olympics. Organizers suggested Monday that some fans would be allowed for test events, but gave no details about how many, or who they would be.

Rules for the Tokyo Olympics, which ended just two months ago, were lax in comparison and allowed free movement around the country after an initial quarantine period.

China's authoritarian state will not permit this despite the fact that most, if not all, attending will be fully vaccinated, and everyone will face stringent daily testing during the Games.