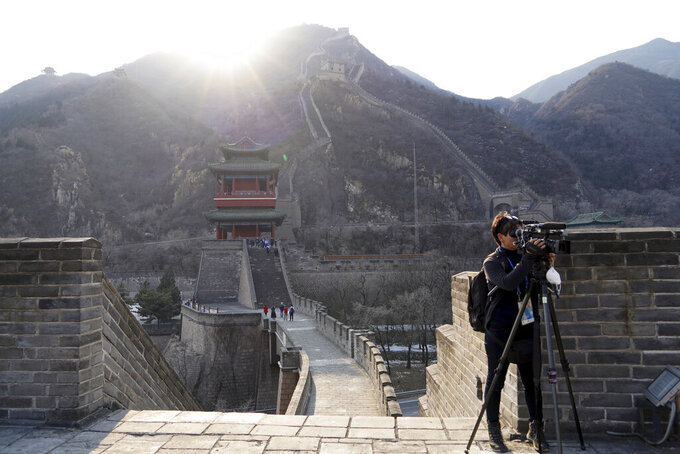 A video journalist covering the 2022 Winter Olympics, works on a trip to the Juyongguan section of the Great Wall, Wednesday, Feb. 9, 2022, on the outskirts of Beijing. (AP Photo/Chisato Tanaka)

JUYONGGUAN, China (AP) — Beijing's famous landmarks are, for the most part, outside the Olympic bubble, including the Great Wall, the ultimate symbol of Chinese history and strength.

A group of 60 athletes and journalists were given an opportunity to visit a section of the wall, making them among the few Olympic visitors able to bypass the virtual tours and cardboard cutouts of the wall in the Olympics media center and experience the real thing.

The group climbed the ancient steps of the Juyong Pass, just outside Beijing, a small taste of China outside the bubble that was made possible by closing off a portion during their visit, in keeping with the strict COVID-19 protocols imposed by the government.

Stretching thousands of miles along the crests of ridgelines and mountaintops, the wall has stood as a barrier protecting the Chinese capital for more than 2,000 years. It stood through dynasties and discoveries. And now, it has seen two Olympics.

For those lucky enough to get on the bus for Wednesday's tour, the rough-hewn stone and dramatic vistas offered a stark contrast to the sterilized, modernized version of China on display inside the Olympic loop, where robots do everything from dunking fries in oil to scuttling around, collecting trash.

The country is expert in powerful gestures, whether through dazzling displays of light and fireworks during the opening ceremony, or a wall constructed over centuries through the labors of millions. And while cooking robots may be flashy, nothing compares to the grandeur of the Great Wall.

Ragan Clark is a New-York based AP journalist on assignment in Beijing for the Winter Olympics. Follow her on Twitter at http://twitter.com/raganclark