BEIJING SNAPSHOT: At Olympics, differing views of the news 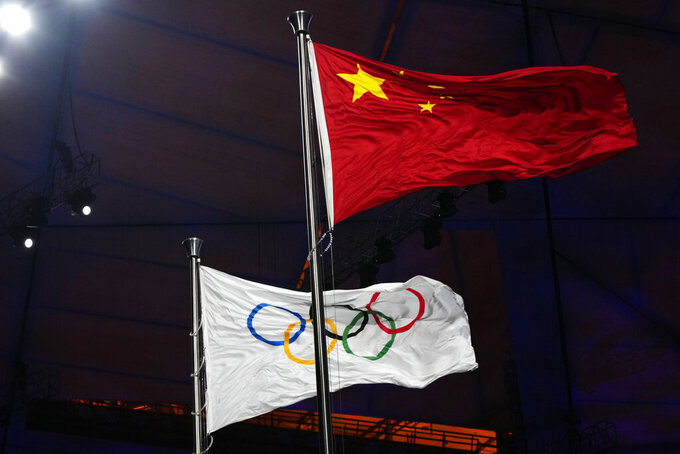 The Chinese and Olympic flags fly during the opening ceremony of the 2022 Winter Olympics, Friday, Feb. 4, 2022, in Beijing. (AP Photo/Natacha Pisarenko)

BEIJING (AP) — Reporters from other countries and their Chinese counterparts seem to have different approaches to the daily news conferences at the Beijing Olympics. Thursday's briefing showcased the varied agendas.

IOC spokesman Mark Adams often gives the first question at the briefings to representatives from China Global Television Network, part of CMG — the China Media Group. Then he mixes it up.

The hot topic for Western reporters was the case of Russian superstar skater Kamila Valieva. She is expected to deliver her country a third straight Olympic gold in women's figure skating. However, she is reported to have tested positive for a banned substance.

Adams was not ready to confirm the reports. Western reporters continued to ask.

“There's a legal issue going on,” Adams said in response to a BBC question. “I can't say any more than that.”

Later he offered the same reply: “It's a legal case.”

After three straight doping questions from Western outlets, Adams called on a reporter from China's state-run news agency Xinhua. No doping interest here: He pivoted to the dangers of winter sports and asked if organizers were ready.

Huang Chun, the deputy director-general of the Pandemic Prevention and Control Office of the local organizing committee, tackled that one. He ran off first-aid preparations, and the availability of ambulances and helicopters.

“The medical service is going on smoothly and effectively,” Huang said through an interpreter.

Four of next six questions were from Western outlets. Again the focus was the skater.

Then Chinese reporters asked a couple of local questions, one aimed at the broadcasting ratings in China.

Then: another 180-degree swing. A Chinese reporter asked about the weather forecast for the next few days and the possible rescheduling of events.

“All the venues are getting prepared from the upcoming cold air — de-icing and getting staff and vehicles ready,” organizing committee spokesman Zhao Weidong said.

“At the same time, I would like to remind all the journalists if you go to the mountains for your work — make sure you dress warmly.”

Finally, back to a Western reporter — me — who returned to the subject of doping.

“We don't want to hear about the other stuff," Adams said, concluding the news conference. "But it arises. It's life.”

AP Sports Writer Stephen Wade lived in Beijing for 2 1/2 years covering the run-up to the 2008 Beijing Olympics and their aftermath. More AP Olympics: https://apnews.com/hub/winter-olympics and https://twitter.com/AP_Sports