Betts, with another great grab, shows what Dodgers wanted 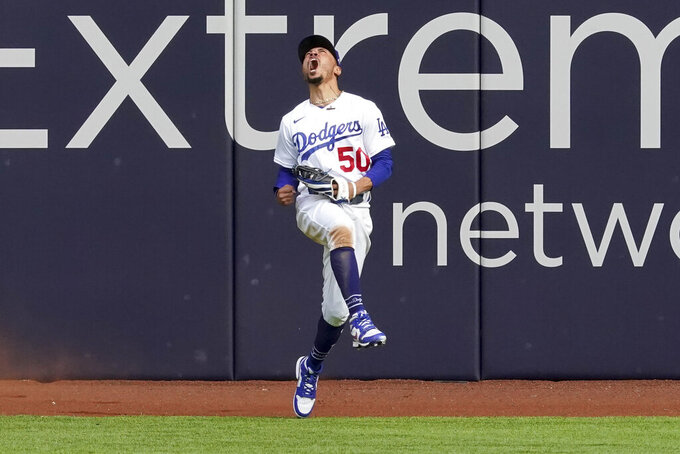 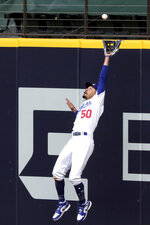 ARLINGTON, Texas (AP) — Mookie Betts jumped high against the 8-foot wall in right field, landing on an advertisement with the word “Extreme.

His catch that robbed Marcell Ozuna to end the fifth inning with a runner on was extreme, just like the running, shoestring scoop the Dodgers star made a night earlier that started a double play and took an Atlanta run off the scoreboard.

“I feel like I did something good for the team, even though I hadn’t done too much with the bat,” Betts said Sunday.

He knew what he had accomplished. Head raised and bobbing back and forth, mouth open wide as he screamed and face flush with emotion, he held the ball at his midsection and took a few gallops toward the plate before joyfully throwing the ball back in.

“I'm glad we had a right fielder out there, especially a special one like Mookie Betts,” Buehler said.

Moments like this were what Los Angeles hoped for when it acquired the four-time All-Star and four-time Gold Glove winner from the Boston Red Sox in February.

“He just impacts the game in so many different ways,” Dodgers manager Dave Roberts said. “Walker was kind of stressing a little bit.”

Betts’ defense, Buehler’s pitching and consecutive first-inning home runs by Seager and Justin Turner boosted the Dodgers to a 3-1 win that forced the National League Championship Series to a Game 7.

The Dodgers, who trailed three games to one in this neutral-site postseason, still have a chance to win their first World Series title since Kirk Gibson limped up to the plate and sparked the 1988 team with that improbable Game 1 walk-off homer off Oakland’s Dennis Eckersley.

Los Angeles wanted Betts so much it agreed to pay Boston $48 million over three years as part of the deal, which also brought the Dodgers left-hander David Price, who opted out of playing this season because of the coronavirus pandemic.

Betts would have been eligible for free agency this offseason, but the Dodgers were as aggressive at the negotiating table as he is at the plate and in the outfield.

Already signed to a $27 million, one-year deal, Betts agreed in July to a $365 million, 12-year contract that includes a $65 million signing bonus guaranteed against work stoppages and shortened seasons such as this one. The tradeoff in the deal was $115 million in deferred payments not fully due until he approaches his 52nd birthday in 2044, deferrals that would be eliminated if he is traded.

He hit .292 with 16 homers and 39 RBIs in the shortened season, tied with AJ Pollock for the team high in homers and second in RBIs behind Seager’s 41. His two-out, two-run double powered the Dodgers to a 3-0 win over Milwaukee that completed a first-round sweep. A day after his 28th birthday, he scored three times and had a sacrifice fly in the 12-3 rout of San Diego that finished a Division Series sweep.

He is batting .227 (5 for 22) against the Braves, recalling his .210 average with four RBIs for the Red Sox in the 2018 postseason, a shell of the regular-season performance that earned him the AL MVP award.

But he helped turn around the NLCS with his glove. His third-inning grab on Dansby Swanson with a runner on third in Game 5 kept the Braves’ lead at two runs, allowing Los Angeles to come back for a 7-3 win. He made an even better catch Saturday.

“Going back is probably more difficult because just all the timing that you have to do and then jumping — staying healthy, too, because I’ve been around that wall and I’ve gotten hurt a couple times,” Betts said.

And now Betts and the Dodgers are one win from the World Series.

“I think a tick behind last night’s play,” Roberts concluded. “It just shows the athleticism, man.”