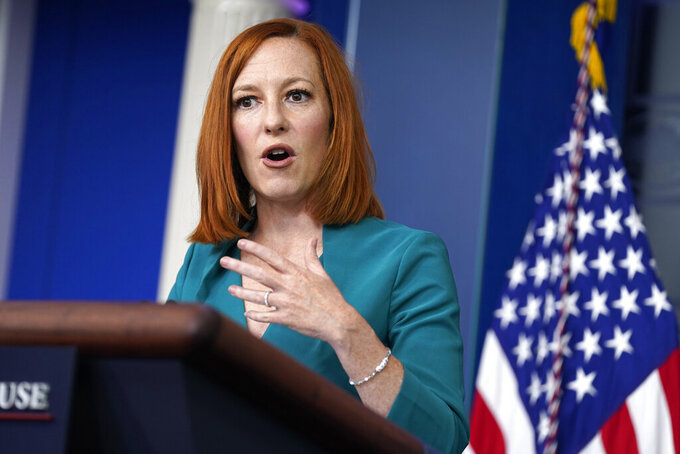 WASHINGTON (AP) — For nearly an hour, President Joe Biden and the top Senate Republican negotiating infrastructure met Wednesday behind closed doors — two seasoned legislators engaged in another round of conversations, but emerging with few outward signs of tangible progress ahead of a deadline next week.

The White House billed the private meeting as more of a conversation with West Virginia GOP Sen. Shelley Moore Capito, rather than a formal negotiation. No new offers were expected to be presented. More than anything, the session in the Oval Office was seen through the political lens of the president and Republicans trying to show the public what Americans say they want — a willingness to work together, even if no deal is within reach.

Friday's next round of talks between Biden and the Republican senator would overlap with the release of the May jobs report, as private economists estimate a meaningful increase from the disappointing April figures. May’s jobs figures could provide evidence as to whether Biden’s earlier $1.9 trillion COVID relief package has helped put the country on track to recover the jobs lost to the pandemic.

Psaki downplayed comments Biden had made Tuesday that were seen as critical of two Democrats, presumably Sen. Joe Manchin of West Virginia and Sen. Krysten Sinema of Arizona. Speaking in Tulsa, Okla., he noted Democrats who don't always vote with the party, blaming them for stalling his agenda.

The president, in meetings with his team, has zeroed in on the questions the GOP proposal raises — namely, which coronavirus relief funds to possibly shelve. Biden’s view is that tapping the COVID funds would unduly burden the middle class, including small business owners, who are receiving aid during the pandemic crisis.