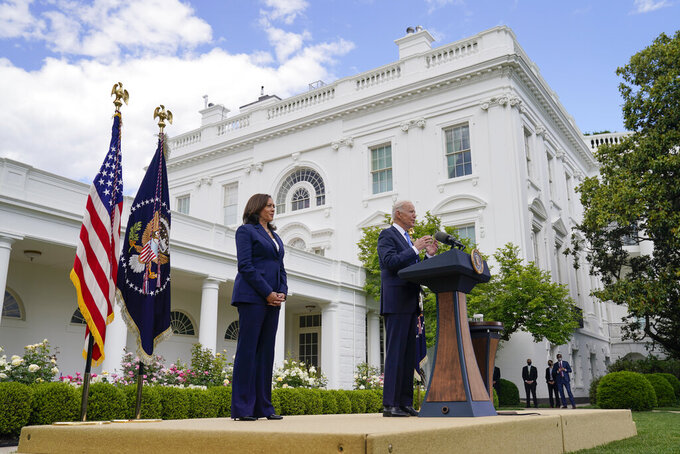 President Joe Biden met Friday with six immigrants who benefited from an Obama-era policy that protected those brought to the U.S. illegally as children. The president is trying to turn attention toward overhauling the nation's immigration laws, but it's an issue he has made scant progress on in the first months of his presidency.

Maria Praeli, one of the immigrants who participated in the meeting, said she and others spoke candidly to Biden about their concerns and about worries that their fates could be upended by a Texas court decision if Congress doesn’t act.

“Our lives have been in limbo for far too long,” Praeli said. She was brought to the U.S. from Peru when she was 5 and is now government relations manager at the immigrant advocacy group FWD.us.

Immigration has been largely left on the back burner while Biden has dealt with the coronavirus pandemic and pushed for legislative action on a massive infrastructure package.

The immigrants invited to Friday's Oval Office meeting have used the Deferred Action for Childhood Arrivals program instituted in 2012 to legalize their residency. Biden renewed his call for Congress to codify DACA and to approve longer-shot legislation that would establish a pathway to citizenship for 11 million immigrants in the country illegally, an effort that faces tough odds in a closely divided Congress.

The White House in a statement said Biden reiterated to the group his commitment to immigration reform. He noted his support for legislation that's passed the Democratic-controlled House to enshrine the DACA program in law and for a separate bill intended to help migrant farm workers attain lawful status and better working conditions.

Ahead of the meeting, White House press secretary Jen Psaki pushed back against the notion that immigration has slid as a priority, noting that Biden has continued through the early days of his administration to have conversations with top aides on strategy to push the issue forward. She added that Biden viewed meeting with individuals helped by DACA — a program that has widespread, bipartisan support among the American public — as a chance to highlight an area on immigration reform where there is a measure of agreement with many Republicans.

“He believes there’s an opportunity to move forward on areas where we agree,” Psaki said.

Homeland Security Secretary Alejandro Mayorkas said in March that his agency was issuing a rule to “preserve and fortify DACA,” but the policy faces a Texas court challenge that could invalidate the protections established under Obama. Former President Donald Trump tried to phase out the program. The U.S. Supreme Court ruled last year that Trump could end it but that he did so improperly.

Biden has made clear that passing legislation enshrining DACA should be the floor for action on immigration.

“If you don’t like my plan, let’s at least pass what we all agree on,” Biden said in his address before the joint session of Congress last month. “Congress needs to pass legislation this year to finally secure protection for Dreamers — the young people who have only known America as their home.”

To be certain, there's been little sign of progress on Capitol Hill.

A bipartisan group of senators led by Democratic Sen. Dick Durbin of Illinois, the chair of the Judiciary Committee, and Sen. John Cornyn, R-Texas — two veterans of immigration debates — appears to have hit a stalemate, with only halting progress despite weeks of private meetings.

A more narrow House-passed measure focused on DACA and another bill to revamp rules for farm workers has almost zero chance of passage in the Senate.

It’s a familiar political standoff as Republicans are focused on the problems at the border, while Democrats want to consider changes to the immigration system.

Ali Noorani, president of the National Immigration Forum, said the meeting with the DACA recipients — a group often referred to by immigration advocates as “Dreamers” based on never-passed proposals in Congress called the DREAM Act— is a positive development.

Still, Noorani said he's hoping for the issue to receive greater White House and congressional attention once lawmakers get beyond infrastructure package negotiations. Biden has set a soft deadline of Memorial Day for finding the contours of a deal with Republicans on infrastructure.

“The sense here is that you get past infrastructure, the next immigration meeting on the couch in the Oval Office should be a bipartisan set of senators,” Noorani said.