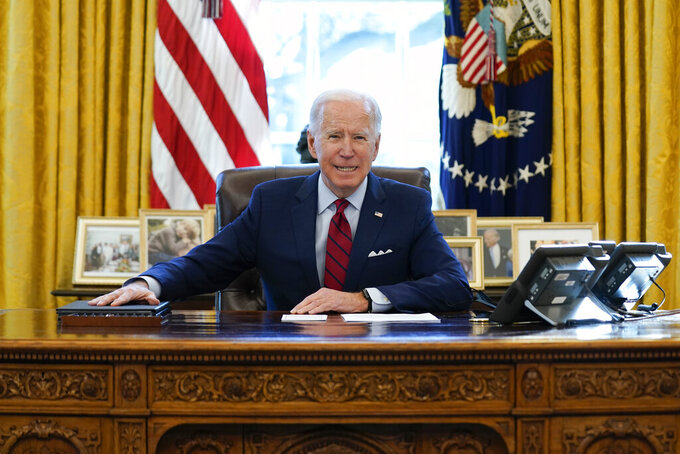 WASHINGTON (AP) — President Joe Biden on Thursday rescinded a regulation that barred U.S. foreign aid from being used to perform or promote abortions. His decision, while expected, was cheered by abortion-choice advocates and some humanitarian groups and denounced by anti-abortion groups.

The move also included a restoration of American funding to the U.N. Population Fund and withdraws the U.S. from an international accord that promotes anti-abortion policies. The steps came just a week after he was inaugurated and fulfills a campaign pledge to reverse a policy that previous Republican presidents, including his immediate predecessor, Donald Trump, had instated immediately on taking office.

The policy — known as the “Mexico City” rule, after the place where it was first announced at an international population conference, or the “global gag rule” — has been a political ping-pong ball, bouncing back and forth between Republican and Democratic presidents since it was first enacted in 1985 during President Ronald Reagan's second term.

“These excessive conditions on foreign and development assistance undermine the United States’ efforts to advance gender equality globally by restricting our ability to support women’s health and programs that prevent and respond to gender-based violence,” Biden said in a memorandum to his Cabinet.

“The expansion of the policy has also affected all other areas of global health assistance, limiting the United States’ ability to work with local partners around the world and inhibiting their efforts to confront serious health challenges such as HIV/AIDS, tuberculosis, and malaria, among others,” he said. “Such restrictions on global health assistance are particularly harmful in light of the coronavirus disease 2019 pandemic.”

Accompanying Biden's determination was a decision to restore funding to the United Nations Population Fund, which Trump had ended over its alleged support for forced abortions and sterilizations in China. The fund has denied those allegations. The year before Trump terminated the funding, the U.S. had provided $69 million to the UNFPA.

In addition, Biden directed the State Department and Department of Health and Human Services to withdraw from the so-called Geneva Consensus, an October 2020 document signed by 34 countries that sought to promote anti-abortion policies and others deemed "pro-family" worldwide. The consensus had been co-sponsored by the U.S. and was signed by numerous nations critics consider to be undemocratic or authoritarian.

Critics of Trump's policies say they had hurt women’s reproductive health care and contributed to poverty worldwide. Supporters argue they are essential to preserve the sanctity of life.

Trump had expanded the Mexico City rule to include nearly all federal health funding, but its effects were felt most abroad, where U.S. assistance can be an essential part of a country's health care spending.

Although supporters of the policy argue that the overall amount of U.S. health care aid was not affected, critics maintain it contributed to a rise in pregnancy-related complications as well other issues by forcing some clinics to reduce broader health services, including for HIV/AIDS, tuberculosis, malaria and other infectious diseases, if they wanted to retain funding.

Reaction to Biden's decision was swift and sharp, even before it was officially announced. Abortion-rights groups and Democratic lawmakers hailed it as key to improving women's lives, while anti-abortion groups denounced it as immoral and unnecessary.

“The Global Gag Rule has had a sweeping effect on lifesaving health care in some of the most vulnerable parts of the world," said Sen. Jeanne Shaheen, D-N.H., the only woman on the Senate Foreign Relations Committee. “It is shameful that the Trump administration chose to not only implement but exponentially expand this ill-conceived policy to historic proportions.”

She called it “an important first step to restore access to family planning services and mitigate the damage caused by an administration that pursued this dangerous policy without regard for its impact."

Doctors Without Borders, which has spoken out against the Mexico City policy, welcomed the move but said more must be done to address the global health care crisis.

“While we are relieved to see a halt to this dangerous policy, there is much more work to do to mitigate the damage we have witnessed. Rescinding the Global Gag Rule is just a first step," it said. “Millions of women still don’t have access to safe abortion care because of restrictive laws, cost, stigma, a lack of trained providers, or other unnecessary barriers, such as mandatory waiting periods or misleading information.”

Anti-abortion groups and lawmakers were equally as strident in their condemnation.

“U.S. foreign policy — and the foreign entities we fund with billions of dollars in grant money — should consistently affirm, care for, and tangibly assist women and children — including unborn baby girls and boys,” said Rep. Chris Smith, R-N.J., who has been one of the most vocal abortion opponents in Congress.

“Funneling U.S. tax dollars to abortion groups overseas is an abhorrent practice that flies in the face of the ‘unity’ Joe Biden and Kamala Harris promised to inspire,” said Marjorie Dannenfelser, the president of the Susan B. Anthony List, which seeks to elect anti-abortion candidates to Congress and other offices.

Echoing the comments of others, she blasted the Biden administration for once again allowing taxpayer money to fund abortions, maintaining the move was payback for a group of “abortion industry giants” that support the president's campaign for president.

“Pushing abortion on other nations is not compassion, it is ideological neo-colonization,” said Lila Rose of Live Action, a national anti-abortion group. "This decision is a dark day for our nation — it will lead to more deaths of more children and for that, Joe Biden should be ashamed.”