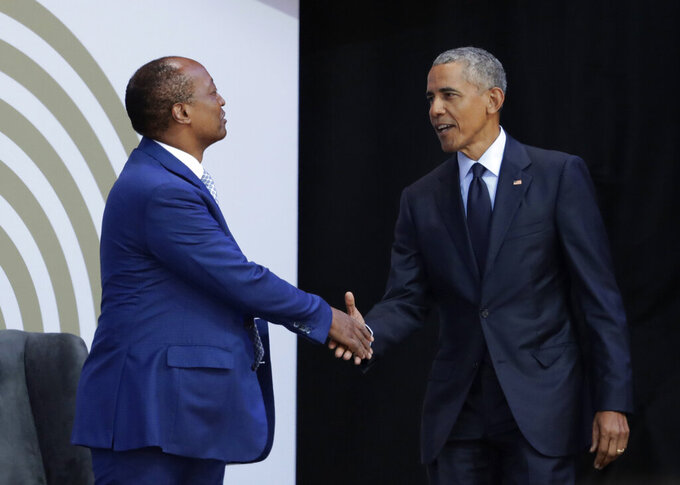 FILE - In this file photo dated Tuesday, July 17, 2018, former US President Barack Obama, right, shakes hands with Patrice Motsepe, as he arrives at the Wanderers Stadium in Johannesburg, South Africa, to deliver the 16th Annual Nelson Mandela Lecture. The election to lead African soccer is seeming to be dominated by FIFA president Gianni Infantino, who supports South African billionaire Patrice Motsepe to win the top job in a ballot next week. (AP Photo/Themba Hadebe, FILE)

RABAT, Morocco (AP) — South African mining billionaire Patrice Motsepe was elected president of the African soccer confederation on Friday without the need for a vote after a deal brokered by FIFA saw his three challengers withdraw, leaving him as the sole candidate.

Motsepe was confirmed by acclamation — a round of applause by officials — at the Confederation of African Football's general assembly meeting.

The 59-year-old Motsepe, a highly successful businessman but a man who has little experience in soccer administration, is now in charge of turning around FIFA's most troubled confederation.

Motsepe was the first Black African to make Forbes' list of billionaires and is the brother-in-law of South African President Cyril Ramaphosa. He became the sole candidate after FIFA president Ginanni Infantino's intervention saw candidates Augustin Senghor of Senegal, Ahmed Yahya of Mauritania and Jacques Anouma of Ivory Coast withdraw.

Infantino attended the general assembly, where Motsepe referred to him as “my brother” and thanked him “for the vision and encouragement of unity.”

Under the deal, Motsepe, Senghor, Yahya and Anouma are set to operate as “a team” at the head of CAF, FIFA said. The move has spurred criticism of FIFA and Infantino, though, for interfering in what is African soccer business.

It's not yet clear how the team will effectively work, although Senghor and Yahya are expected to be given roles as vice presidents. CAF already has three vice presidents.

Motsepe replaces Ahmad Ahmad, who was elected CAF president in 2017 but banned from soccer for financial misconduct and prevented from standing for re-election.

Motsepe is a mining magnate with a fortune of $2.9 billion, according to Forbes. He is the owner and president of South African club Mamelodi Sundowns, but he hasn't held a role before in regional or even national soccer administration.

He is used to operating in high circles, though, once making a speech alongside Barack Obama in South Africa, and attending an exclusive meeting of international business leaders hosted by then-President Donald Trump last year at the World Economic Forum in Davos.

Motsepe has a significant challenge ahead. CAF was effectively taken over by FIFA and run by Samoura for six months in 2019 after the confederation became completely dysfunctional under Ahmad. A report by independent auditors raised concerns about financial irregularities, and the confederation has been in financial trouble since well before the coronavirus pandemic.

After being confirmed as president, Motsepe said he would not make a long speech but did note: “We spent the morning hearing the challenges that confront African football.”

CAF recorded a loss of more than $11 million in the financial year 2019-20, officials said earlier at Friday's meeting, continuing its steep decline over the past four years.

“The new team (Motsepe and his leadership allies) needs to double or treble the revenue of CAF,” said Fouzi Lekjaa, the head of the CAF finance committee. “I don’t want to be alarmist but the figures ... can’t be interpreted any other way.”

But after promising a new era of ethical leadership and transparency for African soccer, Ahmad's reign was one of chaos and mismanagement, and he was banned from soccer for five years last year for financial misconduct. The ban was reduced to two years on appeal this week, but it still prevented him standing for re-election and removed the last obstacle to Motsepe becoming president.

In his campaign manifesto, Motsepe promised to instigate stricter auditing practices at CAF and to build revenue by securing more commercial sponsorship, especially for CAF's two biggest tournaments, the African Cup of Nations and the African Champions League club competition.

“There are many companies all over the world who want to give money to football," Motsepe said last month at the launch of his "10-point action plan" for African soccer. “But they want to be comfortable that the money will not go into the pockets of the leadership of football.”

Motsepe also said he would “professionalize” refereeing on the continent after recent bribery scandals involving match officials, and implement the VAR system “at all CAF senior competitions."