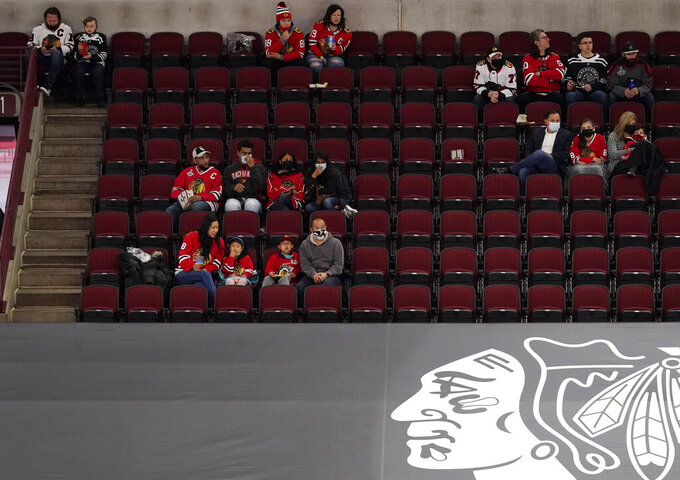 Fans watch during the third period of an NHL hockey game between the Dallas Stars and the Chicago Blackhawks in Chicago, Sunday, May 9, 2021. (AP Photo/Nam Y. Huh) 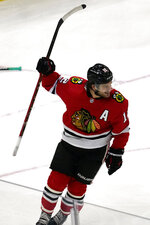 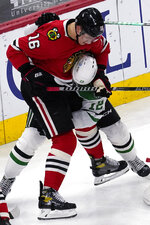 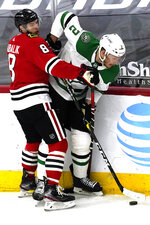 CHICAGO (AP) — Alex DeBrincat and the Chicago Blackhawks lingered on the ice when it was over, holding their sticks in the air.

For the first time all season, it felt like home.

DeBrincat scored two more goals, Kevin Lankinen made 37 saves and the Blackhawks welcomed fans back to the United Center with a 4-2 victory over the Dallas Stars on Sunday night.

“It’s a lot of fun when they’re in the building,” DeBrincat said. “You can see that energy we have a little bit more of. I think we were all excited to play today. It’s good to have them back.”

Chicago hosted a crowd of 3,820 for its first home game with fans in almost 14 months. It was the last U.S.-based NHL team to open its doors to the public during the COVID-19 pandemic.

Two of the biggest cheers of the night were for DeBrincat, who extended his goal-scoring streak to six in a row. He scored on a power play in the first period and then helped close it out when he made it 4-2 with his 31st of the season with 3:12 left.

“He's a dynamic player at both ends of the rink,” Chicago coach Jeremy Colliton said. “He continues to do things away from the puck that puts himself in a position to produce offensively.”

The Blackhawks had 10 rookies in the lineup for their penultimate game of the season, and they did enough to hold off Dallas in the Stars' first game since they were eliminated from playoff contention.

Brandon Hagel had a goal and an assist in Chicago's second straight win. MacKenzie Entwistle became the ninth player to score his first career goal with the Blackhawks this year.

Dallas lost for the sixth time in seven games. Denis Gurianov and Mark Pysyk scored for the Stars, and Anton Khudobin made 21 stops.

Dallas was eliminated from playoff contention when Nashville clinched the final spot in the Central Division with a 3-1 victory over Carolina on Saturday night. With the Stars out of the race, coach Rick Bowness decided to rest banged-up forwards Tyler Seguin and Roope Hintz for the final two games.

The Stars lost to Tampa Bay in the Stanley Cup Final in September, but they were hit hard by injuries this year. They also had to deal with a COVID-19 outbreak in January and a winter storm in mid-February that shuffled their schedule.

“We know on paper, a healthy team, we’re fighting with those other teams for first place in the division. There’s no question in my mind,” Bowness said. “So that’s a huge disappointment, but those are things you can’t control. You can’t. So you can’t beat yourself up for it.”

Chicago was bounced from the playoff race when it lost 5-2 at Carolina last Monday, part of a late-season fade for the Blackhawks after contending for much of the year. Defenseman Duncan Keith and forward Brett Connolly sat out against the Stars after they each suffered a concussion during Thursday night’s 2-1 victory against the Hurricanes.

The crowd cheered loudly when the Blackhawks showed a pregame video welcoming fans back to the United Center. The fans' return also meant more cheers throughout the national anthem — a longtime tradition in Chicago.

“I think as a home team you really feed off that energy," Colliton said. "We've missed that this year.”

After Dallas controlled the play early on, the Blackhawks jumped in front when Entwistle finished a pretty passing sequence 6:23 into the first. Gurianov then tied it at 1 with his 12th of the season, but Hagel put Chicago ahead to stay when he finished a breakaway at 10:31.

“I woke up this morning and called my mom for Mother’s Day. The one thing she said was to try to get me a goal. Mom, if you’re watching, I got you one,” Entwistle said.