Is Blunt's exit an opening for ex-Gov. Greitens to return? 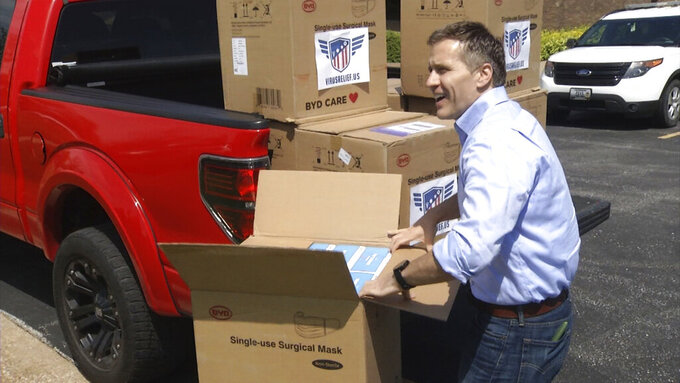 In this April 27, 2020 image from video provided by KRCG-TV, former Missouri Gov. Eric Greitens delivers masks to first responders in Columbia, Mo. Greitens passed out masks across the state in the early days of the coronavirus pandemic last spring. (KRCG-TV via The AP)

Greitens, the 46-year-old ex-Navy SEAL officer whose fast political rise in 2016 was matched only by its swift decline two years later, has increasingly been laying the groundwork for a potential return to politics. He's become a frequent guest on conservative radio and television, handed out masks to first responders, and has been outspoken on Twitter.

Greitens did not respond Tuesday to messages seeking an interview. But he said last week on KFTK-FM in St. Louis that he would "keep the door open” on a Senate run. That was even before Blunt’s surprising announcement on Monday that he would not seek a third term in 2022.

Greitens used the radio interview to align closely with Trump, saying conservatives "want President Trump’s leadership. They want somebody who’s willing to stand up, especially stand up against the lunacy that we’re seeing out of the left.”

Like Trump, Greitens was a political outsider when both ran in 2016. Beyond his military pedigree he was brash and outspoken, but also a Rhodes scholar who started a charity for veterans.

Also like Trump, Greitens defeated establishment Republicans in the primary before winning in November. By the end of his first year in office, Greitens was getting buzz as a future presidential contender.

His political fortunes turned upside down in January 2018 when he admitted to an extramarital affair with his St. Louis hairdresser in 2015, before he was elected.

It was more than a sex scandal: Following an investigation by St. Louis Circuit Attorney Kim Gardner, a grand jury indicted Greitens on an invasion of privacy charge, accusing him of taking a compromising photo of the woman and threatening to use it as blackmail if she spoke of the encounter.

Greitens admitted to the affair (he and his wife, Sheena, divorced last year) but denied criminal wrongdoing. He accused Gardner, a Democrat, of a politically motivated “witch hunt.”

Things got worse from there. In April 2018, Gardner charged Greitens with another felony, alleging that he improperly used the donor list for his charity, The Mission Continues, to raise money for his 2016 campaign.

Then-Attorney General Josh Hawley, a Republican, turned evidence over to Gardner saying he believed Greitens had broken the law. Hawley was elected to the Senate in November 2018.

Meanwhile, the Republican-led Missouri Legislature began considering whether to pursue impeachment proceedings. Those discussions and the criminal charges came to an end when Greitens resigned in June 2018.

In February 2020, the Missouri Ethics Commission found “probable cause” that Greitens’ campaign broke the law by not reporting that it cooperated with a political action committee in 2016. The commission issued a $178,000 fine, though it required payment of just $38,000.

However, the commission didn’t find evidence that Greitens personally knew about the campaign finance issues. Greitens said the report exonerated him.

Greitens' gradual return to a more public life began in 2019 when he successfully was reinstated to the Navy, though not as a SEAL officer.

Last year, at the onset of the coronavirus pandemic, Greitens began delivering masks to first responders across the state. That caused some embarrassment when 150 masks handed out to firefighters in Columbia turned out to be defective.

In recent months, Greitens has become a regular on conservative television, radio and podcasts. He launched his own television show on the internet and Dish TV. He was a guest Monday on former Trump adviser Steve Bannon’s podcast.

Despite the higher profile, some observers aren’t convinced Greitens can overcome his past. Many see Missouri Secretary of State Jay Ashcroft as the early favorite to win Blunt's seat, if Ashcroft opts to run.

Ashcroft is the son of John Ashcroft, who was a governor, senator and attorney general under President George W. Bush. Longtime GOP adviser John Hancock noted how Missourians tend to vote for political lineage. Two-term Democratic Gov. Mel Carnahan's daughter was elected secretary of state and his son to Congress. Blunt's own son, Matt, was elected governor in in 2004.

"I think that Greitens is very damaged goods,” Warren said.

“If you throw Eric Greitens into that mix, I have to say it’s a long shot,” Hall said.

“I think people liked what he was saying, and some people just wished he’d had a chance to finish some of his ideas,” Thomas said. “There was definitely some feeling that he didn’t get to finish his previous commitments.”

Former Republican Lt. Gov. Peter Kinder, who lost to Greitens in the 2016 GOP primary, said that even before the scandals, Greitens was often “at war with members of his own party," and that the Republican-led Legislature may have impeached him had he not resigned.

“I know there is a following for him out in the state among some people. But those who got to see him up close and see his style, in which anyone who had a disagreement with him on principle was labeled a corrupt person ... I don’t want to see a re-run,” Kinder said.

AP reporters David A. Lieb in Jefferson City, Missouri, and Summer Ballentine in Columbia, Missouri, contributed to this report.

This story has been corrected to remove a reference to Mel Carnahan's wife being elected to the Senate.