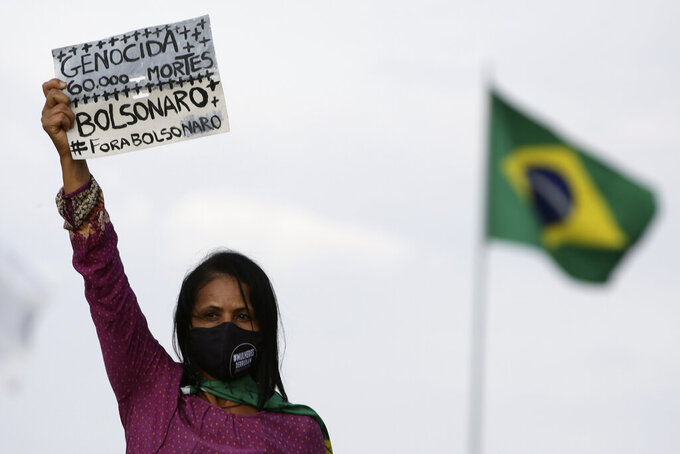 A women's movement activist holds a sign that reads in Portuguese "Genocide 60 thousand deaths, Bolsonaro out," during a protest against the government's inefficiency in the face of the new coronavirus pandemic and the ongoing police brutality against blacks, in front of the National Congress, in Brasilia, Brazil, Thursday, July 2, 2020. (AP Photo/Eraldo Peres)

RÍO DE JANEIRO (AP) — Brazil’s President Jair Bolsonaro on Friday approved a law obliging use of masks on streets and in public transport to prevent COVID-19 infections, but he vetoed clauses that would have required them in churches, schools, shops and factories.

Bolsonaro argued that forcing people to use masks in such places could violate property rights.

As in the United States, use of masks has become contentious and sometimes politicized in Brazil. Bolsonaro himself only sometimes covers his face in public and often mingles with crowds.

Even in cities where masks have been obligatory, compliance and enforcement have been lax.

Brazilian cities last month started lifting restrictions even as COVID-19 cases and deaths continue surging. Latin America’s most populous nation has confirmed more than 61,500 deaths and nearly 1.5 million infections, the second most in the world, and experts say both are undercounts due to the lack of widespread testing. On Thursday, Brazil reported its second highest daily increase in cases, more than 48,000, as well as nearly 1,200 deaths.

The statistical curve of cases in Rio de Janeiro, one of Brazil’s hardest-hit cities, has begun to decline along with the occupation rate of its intensive-care units. On Thursday, Rio proceeded with its gradual reopening plan by allowing gyms and bars to operate at 50% capacity.

Video posted on social media showed crowds of people spilling out of bars into the streets, most of them not wearing masks, though Rio’s governor on June 4 signed a law establishing fines for failure to use masks in public spaces.

The mayor of Sao Paulo, the Brazilian city most affected by COVID-19, announced last week that its bars and restaurants will reopen on Monday.

Some states -- including Sao Paulo – reopened too soon, and Brazil’s surge of daily cases reflects the reopenings underway, said Domingos Alves, an associate professor of social medicine at the University of Sao Paulo.

“It’s an attempt at economic recovery in the face of the losses that happened in the first two months of the pandemic. But it’s a plan that will sacrifice the population,” Alves said. “It’s about mobilizing commerce. Putting people on the streets, gathering, and swapping the virus all around.”