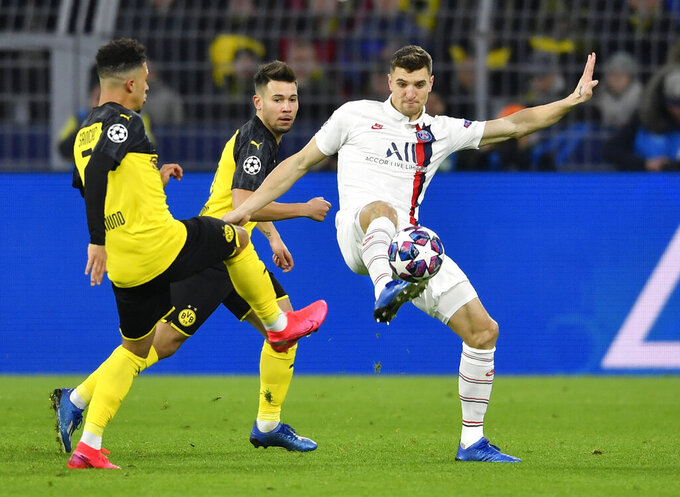 DORTMUND, Germany (AP) — Borussia Dortmund signed right back Thomas Meunier from Paris Saint-Germain on Thursday after he was won over by the club's passionate fans during a Champions League game.

The Belgium defender signed a contract through the end of the 2023-24 season, joining international teammates Axel Witsel and Thorgan Hazard at the German club.

“When you speak about Dortmund, you always speak about 81,000 supporters screaming and shouting," Meunier said in a video on the Dortmund website.

Meunier was particularly impressed by the atmosphere at Dortmund's stadium when the team played PSG in the Champions League in February.

Meunier won the French league three times with PSG. His contract there expires next week.

Meunier played 27 times for PSG across all competitions before the French season was suspended amid the coronavirus pandemic, with PSG awarded the title.

The transfer means Meunier joins a growing list of players switching teams before the Champions League resumes in August. New signings won't be allowed to play, so clubs like PSG which are still in the tournament will find it harder to replace players to leave.

Forward Timo Werner is moving from Leipzig to Chelsea next week, and defensive midfielder Lucas Tousart is heading from Lyon to Hertha Berlin.